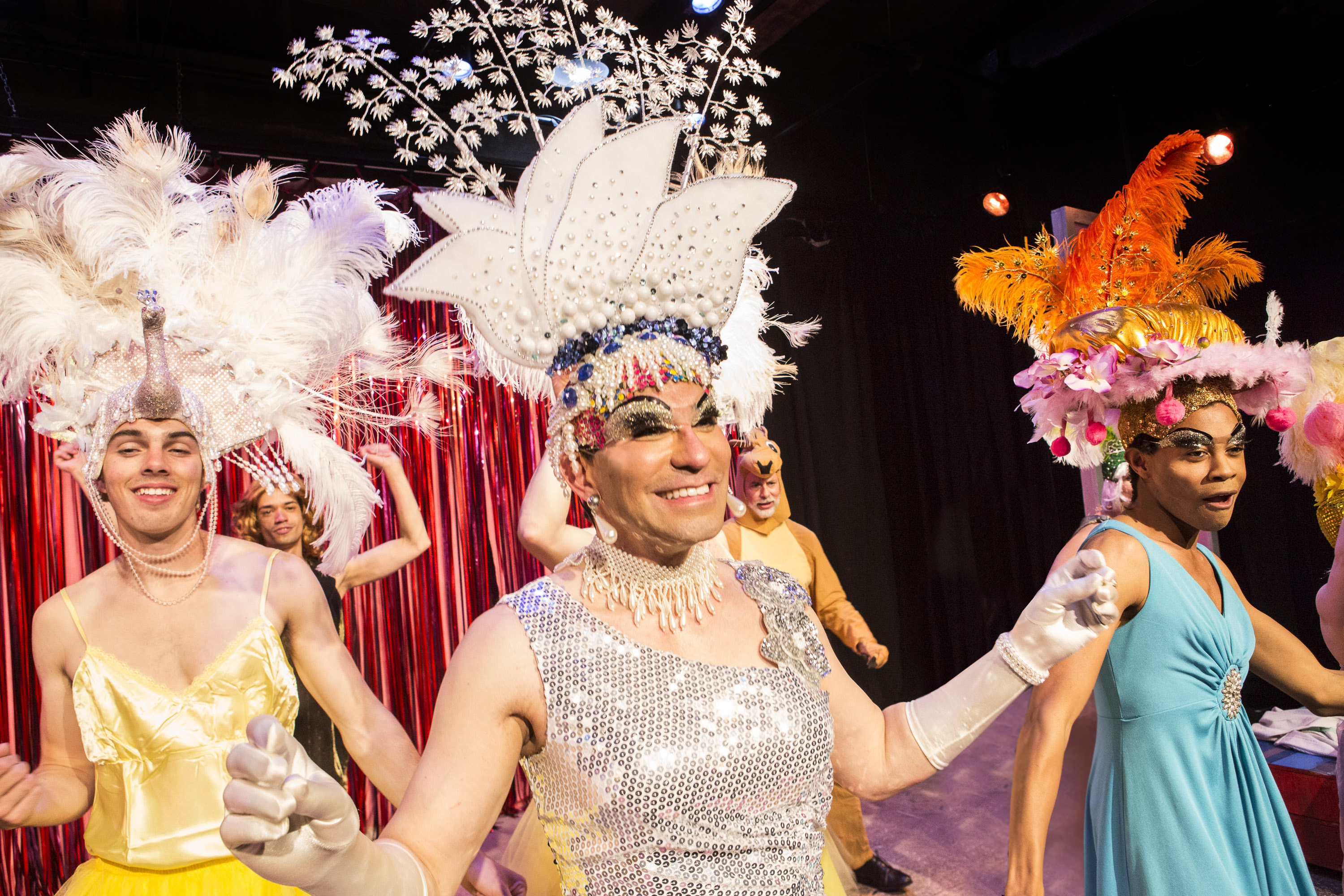 While the show does feature lip-synching, it is mostly about the live singing, lavish scenes, and inventive dances. Musical Director Daniel Feyer, Choreographer AeJay Mitchell, and Dance Captain Patrick Brewer have delivered the goods, weaving many tapestries of sound and movement. Fisher’s alchemy makes magic from the music and motion. Right away, with “It’s Raining Men,” we know this is going to be an over-the top extravaganza, with split-second costume changes, and tons of gaiety. This show will NOT play at the White House!

The most dynamic character, Bernadette (brilliant Darryl V. Jones), sings at her husband’s funeral, to the tune of “Don’t Leave Me this Way.”  The deceased succumbed to peroxide fumes while doing a D.I.Y. hair-dye job. Bernadette, the play’s only trans-sexual, gives Jones a chance to project virtues both female and male. Bernadette becomes a sort of Every Person. Jones never allows the force of Bernadette’s personality to overshadow the others. Bernadette calms their anxieties, remaining cool and collected, a Queen of the Desert, in herself.

But her nemesis on the trip, the young and caustic Adam/Felicia, (irrepressible Charles Peoples III) is spoiling for a fight. Bernadette, wise and experienced, has a hot and cold relationship with foolish Felicia; while Tick/Mitzi (gentle and fiery Rudy Guerrero), frequently intervenes to stop the cat fighting. Guerrero balances a sense of command, with charming vulnerability. Tick is on her way to meet her son in Alice Springs, where the three ladies will perform at his wife’s hotel. Guerrero shows restraint in his subtle rendering of “I Say a Little Prayer for You,” sung for his son. Mitzi shows that fathers come in all shapes and sizes.

The costumes compete with the actors for center stage. Costumier Robert Horek has dreamed up glorious outfits, and thrilling costume changes. The head-dresses by Glenn Krumbholz will make you laugh and nudge your neighbor. Then, there’s the Latina fruit hats, a dancing guy with a bird cage on his head, and a dress made of flip-flops. Everywhere you look, someone is wearing something remarkable.

The Cupcake Costume for the “MacArthur Park” number is pure kitsch—spun sugar that incites wonder and glee. Who can resist dancing pastry?

When Priscilla breaks down in the desert, the ladies are rescued by Bob (down-home Cameron Weston), who falls in love with Bernadette. You will get big laughs from Bob’s wife, Cynthia (effervescent Crystal Liu), who does an eyebrow-raising trick with ping pong balls to the tune of Pop Music.

Let’s not forget the Divas, a three woman Chorus who play their femininity to the hilt. As they sing while the Three Queens lip-synch, Mary Kalita , Nicole Thordsen, and Anna L. Joham provide vital versions of womanhood. The Divas provide a counterpoint of “natural” femininity in contrast to the challenging work of becoming women, which Bernadette, Mitzi, and Felicia must face.

John Fisher drives “Priscilla,” a comic and celebratory work to a happy destination in Oz. Despite scenes of homophobia, this “Priscilla” offers a fabulous fantasy—a pleasure in troubling times. Beneath the wit and frolic, the musical raises issues of equality, fairness, and love. New versions of family emerge, so that we have room to think about gender versus sexuality. The Queen of the Desert is now a musical with big bunches of fun—a great send off for summer ‘Camp.’