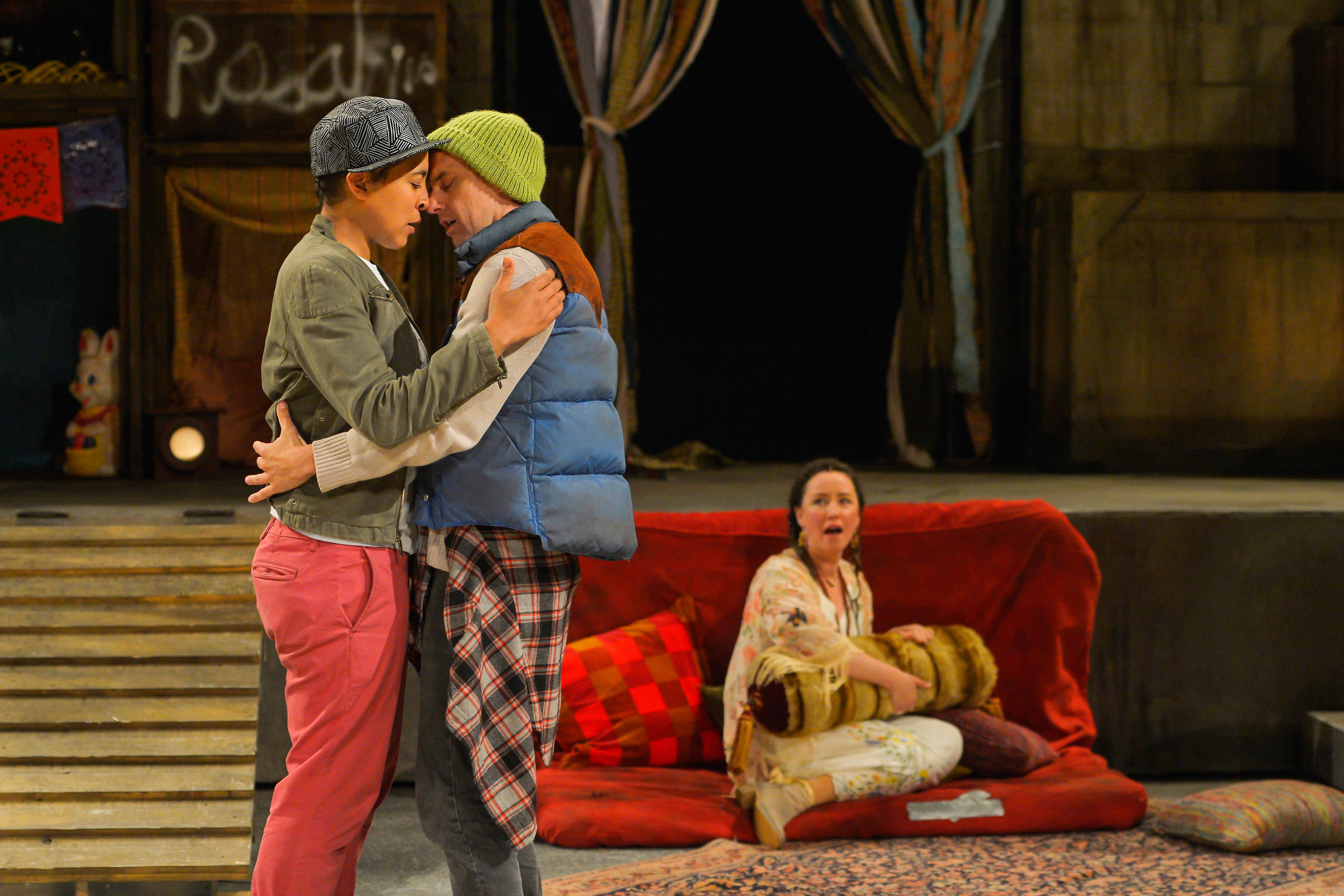 The Bruns Amphitheate in the Orinda hills offers a singular charm to every performance. Here, you sit outside as the sun sets, burnishing the hills in gloaming light.  The air transforms from warm to chill, while birds—even the occasional bat—swoop behind the set.  What better place to stage Shakespeare’s “As You Like It,” set mostly outside in a forest?

And yet, in Cal Shakes new interpretation, the enchanting Forest of Arden becomes an urban alley and a decrepit warehouse in a dramatic set change that leaves the audience gasping and applauding.  The question is: Why?  To be clear, Cal Shakes isn’t about old Shakespeare.  It’s about new Shakespeare, a living Shakespeare, an outdoor Shakespeare with an audience wrapped in blankets and sipping cab.  If all the world is a stage, Cal Shakes has found a piece of terra firma that is always a delight, and always helps provide a creative new look at classic theater.

And so, we are left to wonder why Desdemona Chiang has turned this fantastic, wooded, outdoor theater—a spot that lends itself almost too willingly to a forest—into an urban wasteland.  In Shakespeare, true love finds its animal, its magnificent stage in the rustic, sensuous, and earthly forest.  In Chiang, true love finds its most gloomy test on the streets and in the broken-windowed warehouse of Arden.

Our first clue enters with Rosalind, the star of the show both in script and performance.  Played by Jessika D. Williams, Rosalind has a boy cut and a firm command.  Even her early plunges into giddy love for Orlando, shared with confidant Celia (Maryssa Wanlass), seem canny and operatic, giving power to her exploits in the second half of the play, where she maneuvers as the male Ganymede to convince Orlando to pretend he is she, Rosalind.

And it’s that grayness of things in Chiang’s “As You Like It” that knocks down the shine.  Rosalind never “transforms” dramatically between female to male to female, Orlando seems almost blasé as he tags Rosalind’s name with white spray paint on steel beams in this urban Arden.  When the proper Silvius (William Hodgson) manages to kill a deer and return with it over his shoulder, plopping the carcass down on a mattress, we are left to wonder if any of them are actually better off.  This production seems to tell us that between our male selves and our female selves, our urban selves and our suburban selves, between who kills our meat and who whacks our weeds, in the end, there’s just not that much difference–and that the small differences don’t much matter.

When Celia asks Oliver (Craig Marker) if he, indeed, conspired to kill his brother, Orlando, Oliver replies, “‘Twas I, but ‘tis not I.”  Oliver’s line illuminates the deepest meaning of the play—that the rustic Forest of Arden unlocks the genuine love and compassion of the characters.  But instead, we wonder.  Has Oliver changed?  Will Rosalind and Orlando live happily ever after?  Was the slumming in the warehouse the beginning of their journey to bigheartedness or just a little lesson in discomfort before returning to the ivy-walled suburbs?

Late in the play, Jacques (Jomar Tagatac) delivers one of Shakespeare’s most famous and moving monologues, further complicating  the artifice of the play, and the questionable intentions of the characters:

All the world’s a stage,

And all the men and women merely players;

They have their exits and their entrances,

And one man in his time plays many parts.

We feel the set expand into and beyond the hills, beyond all borders, as Jacques speaks. We are at once very small and impossibly large, the night air enveloping us, opening a portal to all the audiences who heard these words spoken in just this order, binding us together in our mortality, our humanity.

It’s moments like these that shine brightest, when Chiang embraces the original script and spirit of “As You Like It.” And it begs the question: If one plays many parts, does it mean that each part is less authentic?

This is worth mentioning because of some of the more contrived elements of the production, particularly the strange epilogue Rosalind delivers after the actors all take a bow. It’s scripted in the language of Shakespeare and seems to be a speech about welcoming and celebrating all forms of gender and identity, with fellow cast members chiming in. It’s not that the concept and sentiments are unimportant or trivial, but coming as an epilogue to a play that seems to lack courage in conveying this message, it might leave some feeling like one man we overheard as he walked down the hill to his car: “Seemed kind of desperate to be edgy.”  It’s fair.  Even Rosalind whipping off her cap to signal her change from male back to female seems less assertive and more like backing down.

Still, Cal Shakes offers a thought-provoking interpretation of a truly great play in a truly great theater by an incredible group of actors.  It’s a must-see.