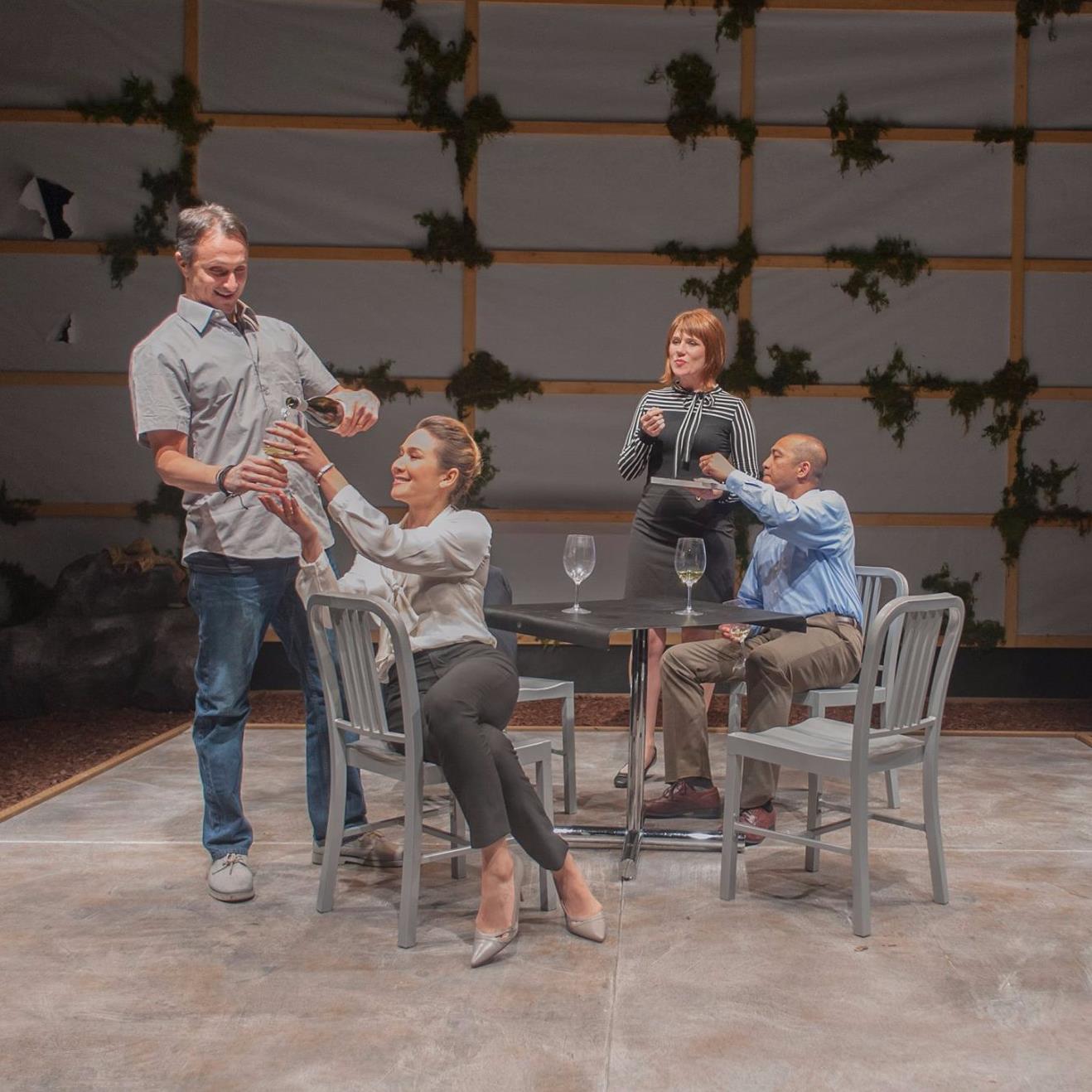 Two mixed couples have their own yuppie views about Chinese versus U.S. honesty and dishonesty, which is subtly and shockingly expressed in their marriages. Do their marriages reflect competition between the two world powers? Or does Great Power politics subsume their marriages?

Watching these four superb actors, under the direction of the accomplished Bill English, we are watching high level diplomatic debate—disguised as marital accord and discord.

Daniel (discreet Don Castro), a high ranking Tech guy, expresses his super-sensitive perceptions about Chinese and U.S. cultures—especially in the corporate world. And Ben (volatile James Asher), a new hire in Daniel’s firm, is wide-eyed and easily put in his place—a White Guy who fancies himself a China “expert.”

There’s lots of fault to go around: Lindsey (letter-perfect Lauren English), convinces us of her honesty and her duplicity at the same time. And Samantha (beguiling Charisse Loriaux) unsettles everyone with her Mona Lisa smirk.  Director Bill English gives us two mixed couples, ready to engage in a witty war with their spouses and with each other—a real culture clash.

Elegant and chic, the four of them sip wine in Lindsey and Daniel’s stylish patio, backed by greenery and surrounded by a circular path of redwood chips. They focus laser-like on each other’s feelings and thoughts, seeking advantage. As new friends, the Techie Chinese-U.S. couples sparkle with smarts, style, and conspiracy. They even sit on the outer path and listen as others talk about them: a real CIA treat for a marriage.

They are trying to make nice with each other, but old love and jealousy explode when Ben, the slippery Caucasian, spills the beans about a camping trip he took with Lindsey the White Gal, back in college. The couples pair off and compare intimate notes. Daniel, as an Americanized Chinese man, feels a shot. Is Ben making a pre-emptive strike on Chinese pride and trade?

Who is loyal to whom? Is there any trust possible between partners or between the two cultures? Each actor superbly plays her/his role. In this cross-cultural comedy of manners. As we locate our own personal and national insecurities, the play offers a new Oscar Wilde comedy of international wit and manners.

Suddenly, everyone is a spy, and their work-life is in question. The married partners are in competition with each other, and racial stereotypes are invoked. It’s a Tech World comedy of manners, and international indiscretions.

Playwright Christopher Chen has tackled love and politics. The two mixed marriages reflect the world that makes them. Their love is shackled by the great cultural debates. That dual awareness—of the personal and political—makes Chen’s play brilliant—and more groundbreaking than we can imagine.

“You Mean to Do Me Harm” by Christopher Chen, directed by Bill English, Sandbox Series, S.F. Playhouse, at The Strand Theater, 1127 Market Street, San Francisco, through Sunday, July 2, 2017. Info: sfplayhouse.org