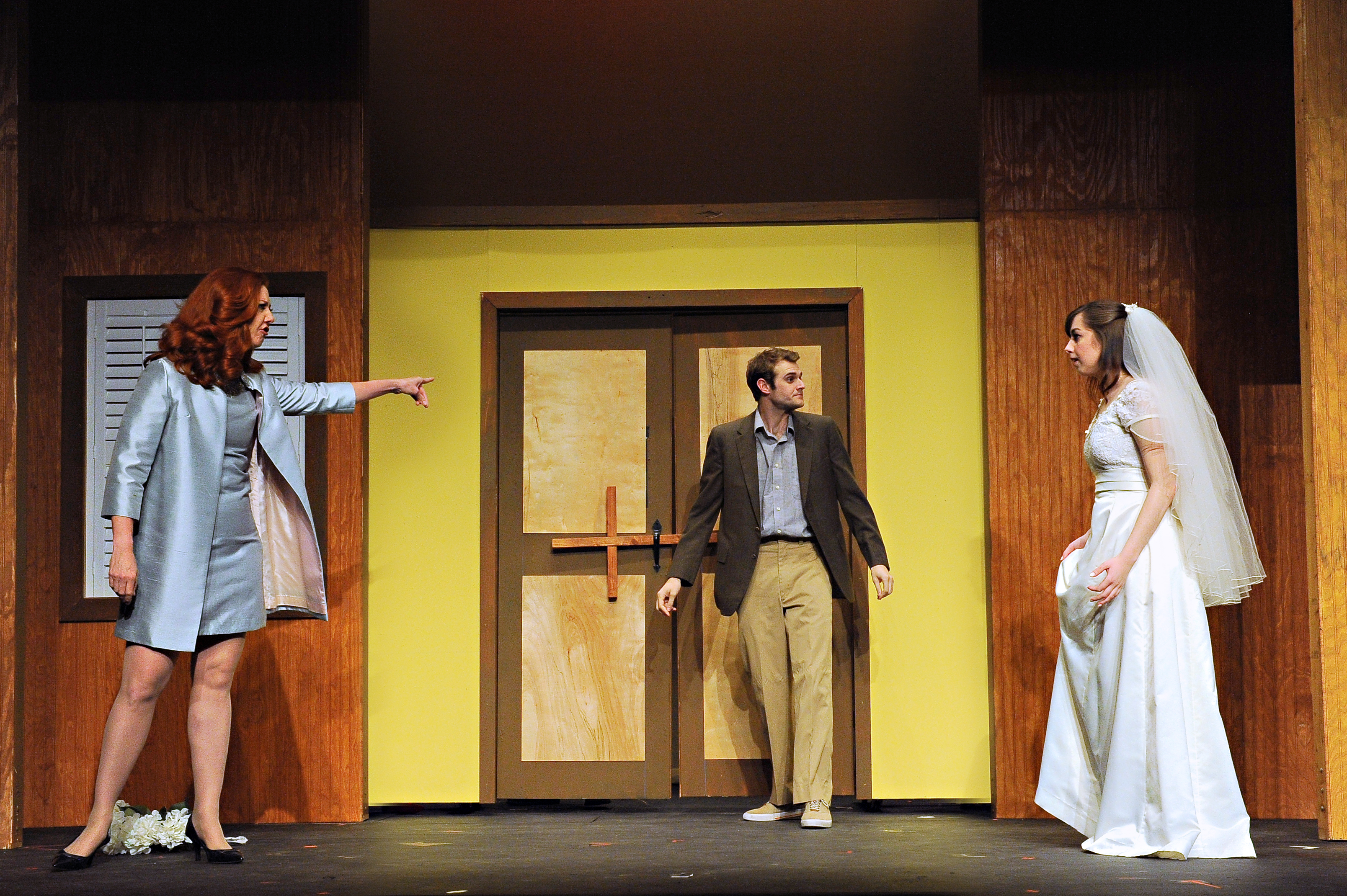 “The Graduate” is at once familiar and new, a stage variation of a classic film that’s nostalgic and surprising. Palo Alto Players borrow liberally from both the 1967 movie and the slim novel by Charles Webb where it all began. Keeping to the original time and place (Los Angeles in the late 60s), some scenes are enacted nearly verbatim from the film, while others are smartly transposed to the stage with a compelling twist. Although many will want to see those great movie scenes re-enacted, the new material fascinates and delights the most, with a fresh take on characters we thought we knew.

Benjamin Braddock (Max Tachis) comes home from college suffering a debilitating case of acute self-awareness, knowing he wants nothing to do with the conventional and privileged world that’s been planned for him by his upper-middle class parents. The only son of an affluent Los Angeles businessman, Benjamin remains in the dark as to what he truly wants. His clueless but caring parents are of no help. Into this emptiness comes a family friend, Mrs. Robinson (Betsy Kruse Craig), who knows exactly what she wants, which is Benjamin.

When Mrs. Robinson enters Benjamin’s bedroom, he sits forlornly on his bed in his resplendent graduation gift—a scuba diving suit—and is soon mortified that the wife of his father’s business partner refuses to immediately leave. As the summer wears on and Benjamin remains directionless, his principled resistance to Mrs. Robinson’s seduction weakens—mostly out of boredom and restlessness.

He calls Mrs. Robinson from a hotel lobby, for a drink and a talk. After spending several nights together at the Taft Hotel, Benjamin swerves from a discussion about art into a brutal, searing war of words. Bitter truths are revealed and confessions spilled, but wrapped like candy in layers of charm and wit. The trigger for the conflict involves Elaine, Mrs. Robinson’s daughter. Their burgeoning three-way relationship is fraught with peril, with no good end in sight.

Playwright Terry Johnson’s adaptation successfully evokes the charm and spirit of its famous parents. The cast makes the characters new, and the fun lies in seeing how they handle the troublesome seduction.

A perky and impressively insightful Elaine (Michelle Skinner) finds the way to Benjamin’s heart despite his pressing need to alienate her. She then confidently demands that he must find the way to hers. When Elaine and Mrs. R. have a surprisingly somber tete-a-tete, the revelations resonate to the very end, deepening the mother-daughter tensions.

Mr. Robinson (Mark Novak) and the Braddocks (Shawn Bender, Raegena Raymond-Brunker) provide what Benjamin and Mrs. R. sorely lack: perspective and a moral compass. Their hapless confusion and exasperated outrage are justified and a delight to behold.

Director Jeanie K. Smith has assembled a charming cast, using crisp staging and fast pacing. The clever set design and lighting allow for smooth and swift transitions from Benjamin’s bedroom to the Taft Hotel to a flat in Berkeley to the church where Elaine’s fiancé, Carl Smith (an able Adam Currier, who also handles the reception desk at the Taft and tends bar—a nice triple play) stands ready to snatch away Elaine from Benjamin.

A climactic encounter between Benjamin, Elaine, and Mrs. Robinson—while Mr. Robinson and the rest of the wedding party rage behind a cross-barred door—gives us deeper glimpses into their personas. Unlike the film, there is no conveniently passing bus to sweep Ben and Elaine away. Yet we feel the same sense of jubilation turning to quieter contemplation of their uncertain future.

Go to “The Graduate” for the nostalgia and the familiar, and be surprised and delighted by the new and the innovative.

“The Graduate” by Terry Johnson, directed by Jeanie K. Smith, based on the novel by Charles Webb and the screenplay by Calder Willingham and Buck Henry, at Palo Alto Players, Palo Alto, California, through Sunday, July 2, 2017. Info: paplayers.org