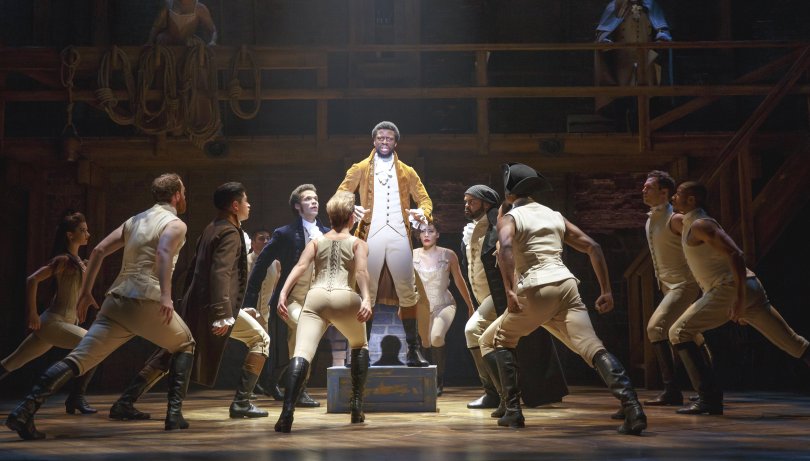 When tickets for the national touring production of “Hamilton” went on sale this past spring, at $200 for the cheapest seats, they sold out instantly. Almost as quickly the price doubled and tripled on the secondary market. There are tales of eager fans paying many multiples of face value for good seats. Whether they are good value is an open question.

At San Francisco’s capacious Orpheum Theatre through August 5, Lin-Manuel Miranda’s “Hamilton” is as much a pop culture phenomenon as it is theatrical spectacle, very much the cutting-edge  equivalent of what “West Side Story” and “Hair” were in their times. Friends and families queue up outside the building for two hours before curtain, jostling to take photos of themselves under the show’s stark logo. One has the feeling that the enthusiasm is partly marketing-driven hysteria; that many people who do not ordinarily go to live theater are eager to see the show because it’s the biggest thing to come along in years. They want to see “Hamilton” at any price simply because it’s “Hamilton.” They may not know a footlight from a footfall but they want to tell their friends they were there.

There are unprecedented numbers of young people in the audience—an enviable circumstance that has not gone unnoticed by theater companies, artistic directors, and producers nationwide—including many adolescent girls clearly smitten with dance and musical theater. It’s quite likely that many in the audience have only the barest comprehension of the historical events at the core of the show’s story—Alexander Hamilton’s rise to power before, during, and after the American Revolution, and his tentative and ultimately destructive relationship with Aaron Burr. That the show may spur renewed interest in history among an ignorant population is all to the good.

Like Shakespeare’s “Julius Caesar,” Lin-Manuel Miranda’s ambitious and mostly successful piece takes liberties with facts for the sake of entertainment. There is nothing new in that. What is new is that “Hamilton” is the first hugely successful large-scale hip-hop musical, a spectacle of the first order, from its towering set to the uniformly excellent talents of its cast, all of whom are superb actors, dancers, and singers. Standouts include Michael Luwoye in the title role, Joshua Henry as his nemesis Aaron Burr, Isaiah Johnson as George Washington, Jordan Donica as the Marquis de Lafayette, with Rory O’Malley supplying comic relief as the fey, addled King George.

The show’s stagecraft is unassailably great, as is Miranda’s incredibly clever wordplay that propels the show’s three hours. Within his genre, he may be the equal of Stephen Sondheim. Andy Blankenbuehler’s pugilistic choreography requires dancers of Olympic gymnastic caliber; the national touring company is deeply endowed.

But the show is as loud as a rock concert and almost as long, with only a couple of tender moments to interrupt the angry monotonous beat of Miranda’s rap music. Although rap was not a particularly angry musical form when it first appeared forty years ago, in the past two decades it has become a vehicle for the most vicious kind of brutally stupid blunt-force anger. Whether appropriate to the dramatic context or not, brutally stupid blunt-force anger is the emotional tone with which almost the entirety of “Hamilton” is delivered, reinforced by aggressive choreography that might have been inspired by a mixed martial arts competition.

The angry tone is not entirely inappropriate, however—the Revolution was a massive expression of anger. There is just too much of it to sustain a three-hour show. By intermission I felt as if I had endured a beating.

It was very much the same reaction I’d had to punk-rock spectacles “Bloody, Bloody Andrew Jackson” and “American Idiot.” Like “American Idiot,” after its national/global tour is done, “Hamilton” is destined for a permanent place in Las Vegas, where it will run forever two times per day alongside “Cirque du Soleil,” “Blue Man Group,” and “The Beatles LOVE.” I came away from “Hamilton” amazed not enlightened, numbed not nourished.

There is an unavoidable spectacle of another kind involved with the experience of “Hamilton:” miles of urban squalor surrounding the Orpheum. The painful disparity of thousand-dollar tickets against sidewalks overflowing with homelessness and petty crime may give some theatergoers pause. It’s a pity that the anger fueling punk rock and rap can’t be channeled into something more permanently beneficial than an overpriced diversion. We can only hope.

“Hamilton” is based on Ron Chernow’s biography of Founding Father Alexander Hamilton.