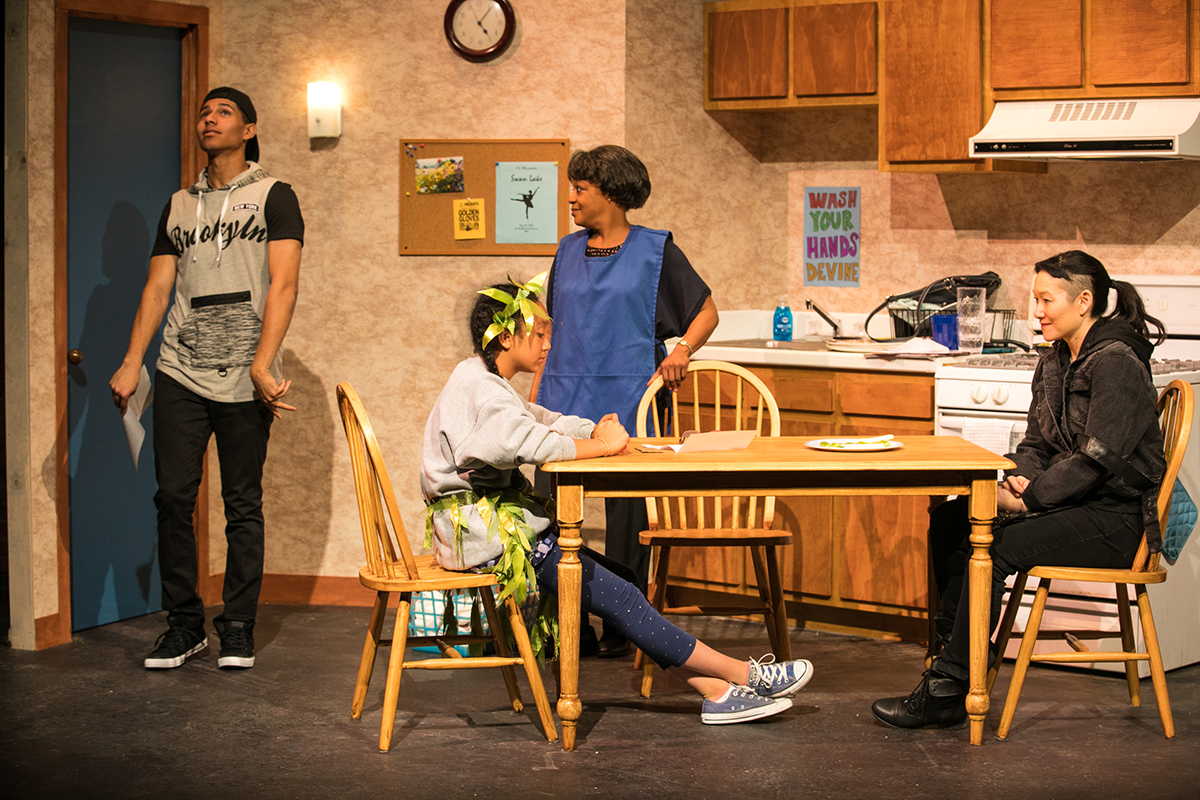 Kimber Lee Takes Us Behind the Horrific Headlines

When we watch “brownsville song (b-Side for tray)” at Shotgun Players, we are tasked with a question: Why does the young African-American Tray (Davied Morales) fall like so many others, even though he clearly chooses a better path? The question lingers from the start, when Tray’s grandmother Lena (Cathleen Riddley) berates us, as a loving mother who has just lost one of her two kids.

Sitting in a chair, with the lights dimmed to create a confessional atmosphere, Riddley addresses the crowd with ferocious intimacy. She makes us feel like she is talking to each one of us—handing down a stirring lecture about street truths that we usually ignore and avoid.

After all, who listens to the B-side, when the hits are on the A-side? “brownsville song (b-side for tray)” tells the story behind those inner-city murders we hear about on the news. Playwright Kimber Lee explores the tragedies in that raw, crowded corner of Brooklyn. She tells about love and family, and notably, the stories that go untold. Director Margo Hall gives life to these characters and we believe in their fast-paced lingo and their lives.

“brownsville” bursts with powerful performances by Davied Morales, playing young hard-working Tray—and Cathleen Riddley, as his grandmother and guardian, Lena. Their portrayal of authentic laughter, love, frustration, and trauma made me feel like I was watching a tragedy unfold before my eyes, in real time.

Davied Morales lights up the stage with each youthful cackle, forceful shout, and playful jibe. We crave more of his boisterous, charismatic, imperfect, yet totally admirable Tray. Tray shines with potential. He is a Golden Glove boxer, saving up money from his job at Starbucks to buy a car.

Tray and his half-sister Devine (Mimia Ousila) have no mother and no father. Their father was murdered when they were younger, and Devine’s mother Merrel (Erin Mei-Ling Stuart.) left them because of drug addiction.

Morales portrays Tray as a loving brother, brilliantly. Tray undertakes a new path to masculine pride for a teen-ager in our time. No longer does a young kid in New York need to establish himself by joining a gang. By being a role model for his kid sister, Tray finds a more meaningful path to manhood.

Unlike his friend Junior (William Hartfield), Tray tries to avoid the pitfalls of gang life. When His Grandmother cries, “Not him,” she hopes that Tray will overcome the temptations of the men of his generation. Lena thoroughly believes that Tray will make it out of Brownsville alive and well.

Living in Brownsville, mindless murder is familiar to Lena’s weathered soul. When Tray innocently gets in the middle of a gang rivalry, we feel her heart shattering disappointment. Our hope for Tray’s future is tarnished.

But when the show ends, and the players emerge for their standing ovation, the story is not over. Kids like Tray get murdered all the time: young men and women whom we will never know. We know their names, where they went to school, and see the scattering of Facebook pictures that their parents share. But beyond that, the story of their laughter and their dreams—their love and happiness—remains untold.

At Berkeley’s Shotgun Players, “brownsville” bursts our bubble with a taste of a reality that is kept far away. As a Cal student, I have it easy: reading, writing, and philosophizing about things that won’t help other kids like Tray live. When I watch “brownsville song,” I ask myself, “How can I help Tray live?”