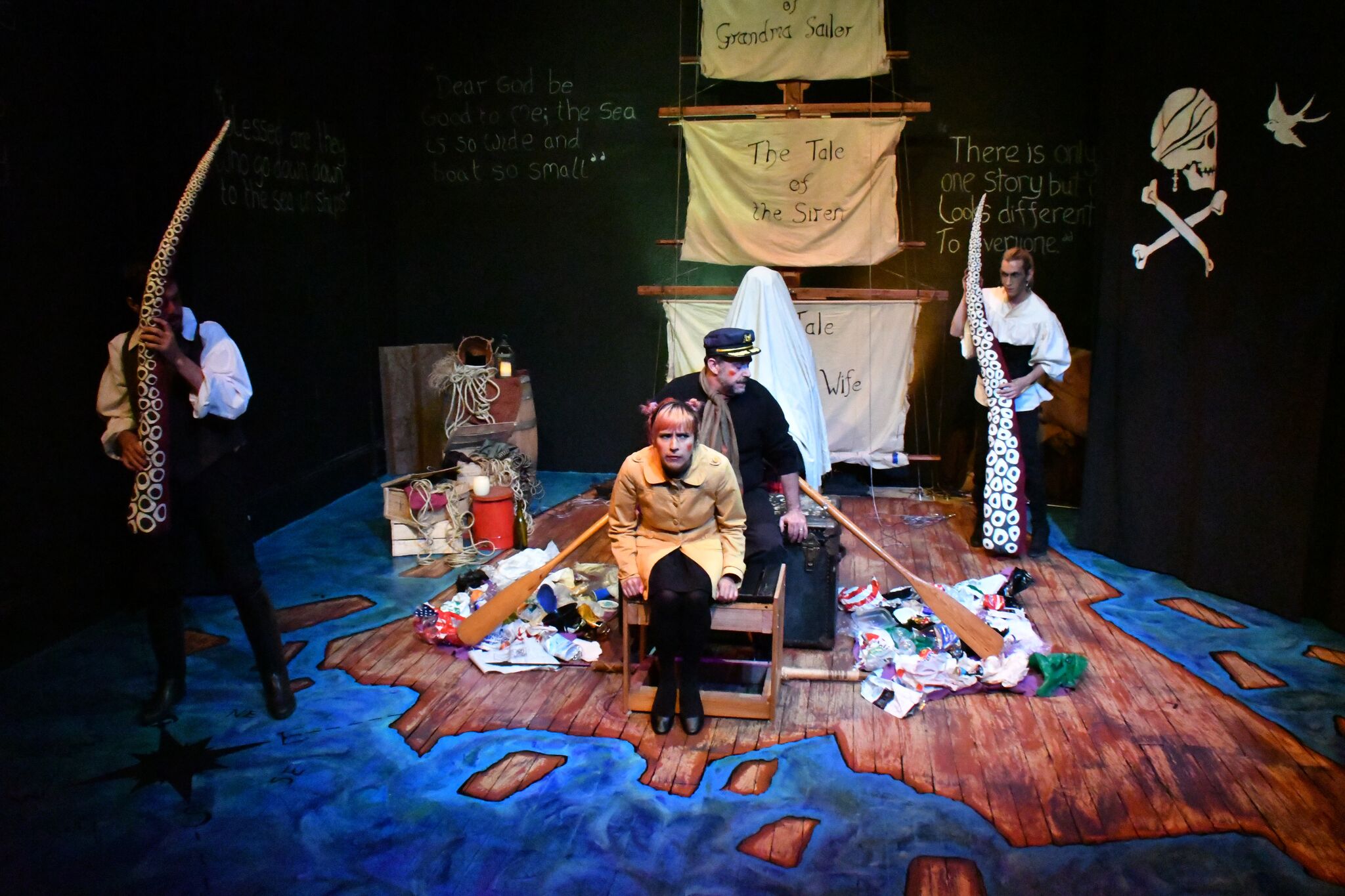 Lovers of the sea and the stories that surround it will enjoy careening across the stage (err…waves) with this rollicking production of “A Life on the Ocean Wave.” Greeted by Shantywoman (boisterous Christina Augell), the audience is soon singing the age-old question “What Do We Do with the Drunken Sailor?”

By the way, “A Life” has a rollicking sub-title: “Being a Merrie Evening of Genuine Sea Chanty Sing-Along and Also a Historically and Scientifically Accurate Account of a Sailor’s Life at Sea, in Which Ghosts Appear and Have Something to Say. Shantywoman is joined by two sailor ghosts, Drippy (multi-faceted Daphne Dorman) and Thirsty (versatile singer/comic Kyle McReddie). As Drippy and Thirsty provide the counterpoint to the ebullient Augell, the trio soon have us singing and stomping along.

In keeping with the theme of this ship of fools, the pilot is a blind woman (irrepressible Shirley Smallwood), who uses her psychic powers to steer the ship. She is met with skepticism by everyone except the trusting Captain (steady Carl Lucania), who values the pilot’s many years of experience on the sea. Sea monsters, sirens, and violent storms assail the ship—interspersed by fantastical tales. Director Stuart Bousel deftly weaves the stories of the three playwrights Nancy Au (“The Tale of Grandma Sailor”); Conrad A. Panganiban (“The Tale of the Siren”); and Nara Daklbacka (“The Tale of the Captain’s Wife”) into a seamless adventure on the high seas. The play was developed from a short sketch at the San Francisco Olympian Festival by Bousel and head writer Carson Beker.

Staged in one of the Exit Theater’s 45 seat venues, scenic designer Marykerin Naughton makes innovative use of the intimate space to create the ship on which we sail. A beautifully painted floor suggests both the ocean and the ship’s deck. To the rear of the stage, stands a ship’s mast complete with sails that when lowered doubles as titles for the separate segments of the 75 minute production. It’s a bit disjointed but still seaworthy. The audience found the production entertaining and were quickly swept up in the enthusiastic singing of classic shanties, especially with the words being supplied in the program. Cast your bread upon the waters, and find fun in this lighthearted musical odyssey of the high seas.