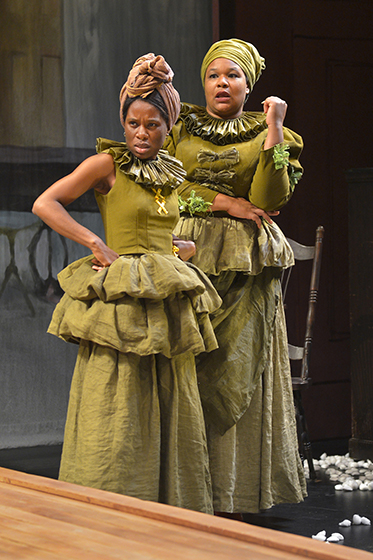 Jacobs-Jenkins Reveals: The United States Is an “Octoroon”

In the early moments of “An Octoroon,” the 2014 play by Branden Jacobs-Jenkins, we learn that an “octoroon” is a person who is 1/8th black. The playwright playfully calls his lead character “BJJ,” using him to vent that audiences think he is trying to “deconstruct race in America.” Complain he may, but he succeeds in making us think about the correlation between melanin levels and how we are treated in this country.

The 2010 U.S. Census estimates that 12.6% of the U.S. population is black, just about 1/8th of all Americans. This may be a convenient coincidence, but the symbolism is obvious: America, itself, is an octoroon. Being black is an important part of who we are as a nation, part of our identity, whatever the color of our skin.

While his play is about all of us, Jacobs-Jenkins focuses on U.S. slaves. He resurrects the forgotten generations of black women and black men whose personal tragedies make up the collective nightmare of slavery in America.

“An Octoroon” gets right to the point: BJJ (played by the multi-talented Lance Gardner), an African American playwright, laments his position as a black playwright in a white country. Through a conversation with himself (or his therapist), he decides to stage a play written by his “role model,” the long-dead abolitionist playwright Dion Boucicault.

Boucicault’s 1859 melodrama becomes a play-within-a-play, where we are introduced to Minnie (Afi Bijou) and Dido (Jasmine Bracey), a pair of house slaves who form the link in time between “The Octoroon” and “An Octoroon.” Bijou and Bracey get roars from the audience for their perfectly delivered banter, mixing slave lingo with modern slang. Although both women are the “property” of George (Gardner transformed), the “good” white slave owner, the Black women’s insights undercut the pathos of the pretentious southerners.

George is in love with the trembling Zoe (restrained, deliberate Sydney Morton). Zoe is the octoroon, a good-natured and well-intentioned young woman. But she, too, is fearful of her true ancestry: What better metaphor for America? Zoe wants to save George’s estate and all its occupants from being sold to the highest bidder. She and George “love” each other, but they can never unite.

M’Closky (Gardner transformed, again), a wealthy, evil, white slave owner, decides to take by force and capital what he cannot get legally—namely, Zoe and her affection. Gardner’s three-way personality split, a fantastic comedic device, forces the actor into laugh-out-loud slapstick, playing George and M’Closky at the same time. This is Jacobs-Jenkins’ reminder that owning slaves is inherently evil. George is literally the same as M’Closky, so there’s no point in separating them into two bodies. A slaveowner is a slaveowner.

While George and M’Closky are collapsed, Minnie and Dido are expanded. Jacob-Jenkins supplies them with story arcs and motivations, something absent from “The Octoroon” of 1859. In the Civil War-era play, the slave women rarely speak up; they exist as props for the whites.

By writing bold new roles for the women, Jacobs-Jenkins subtly criticizes the familiar practice of “talking about” instead of “talking with” black people. Minnie and Dido are no longer silent slaves in a play about the “luckier” mixed-blood Zoe. Rather, the African American women take center stage and drive the plot, expressing feelings and suffering consequences.

“An Octoroon” premiered a year after the Fergusson, Missouri uprising, as Black Lives Matter gathered momentum. Amidst increasing racial tensions, and in the wake of the terror in Charlottesville, the play remains prophetic.

The shocking photo that hangs onstage in the last act feels like a slap in the face. The stark image forces us to acknowledge that a double standard for individual rights has led to moral catastrophe and personal tragedy. When we turn away from the ongoing disaster, we repeat the past.

Like our country, Zoe is discovering her roots and is dismayed. America and its citizens are coming to terms with the fraught history of violence against entire populations. When will we admit that we are “An Octoroon”?

We must accept the past’s lessons for the future: America is an octoroon. We’ve been mixed and matched so many times: black, red, white, and blue. Like Zoe, we must decide what will become of us, and we have to decide now.

Enjoy thinking about theater and justice in this article on “An Octoroon” by Ishai Padawer.

See our Theatrius review of Berkeley Rep’s “An Octoroon.”