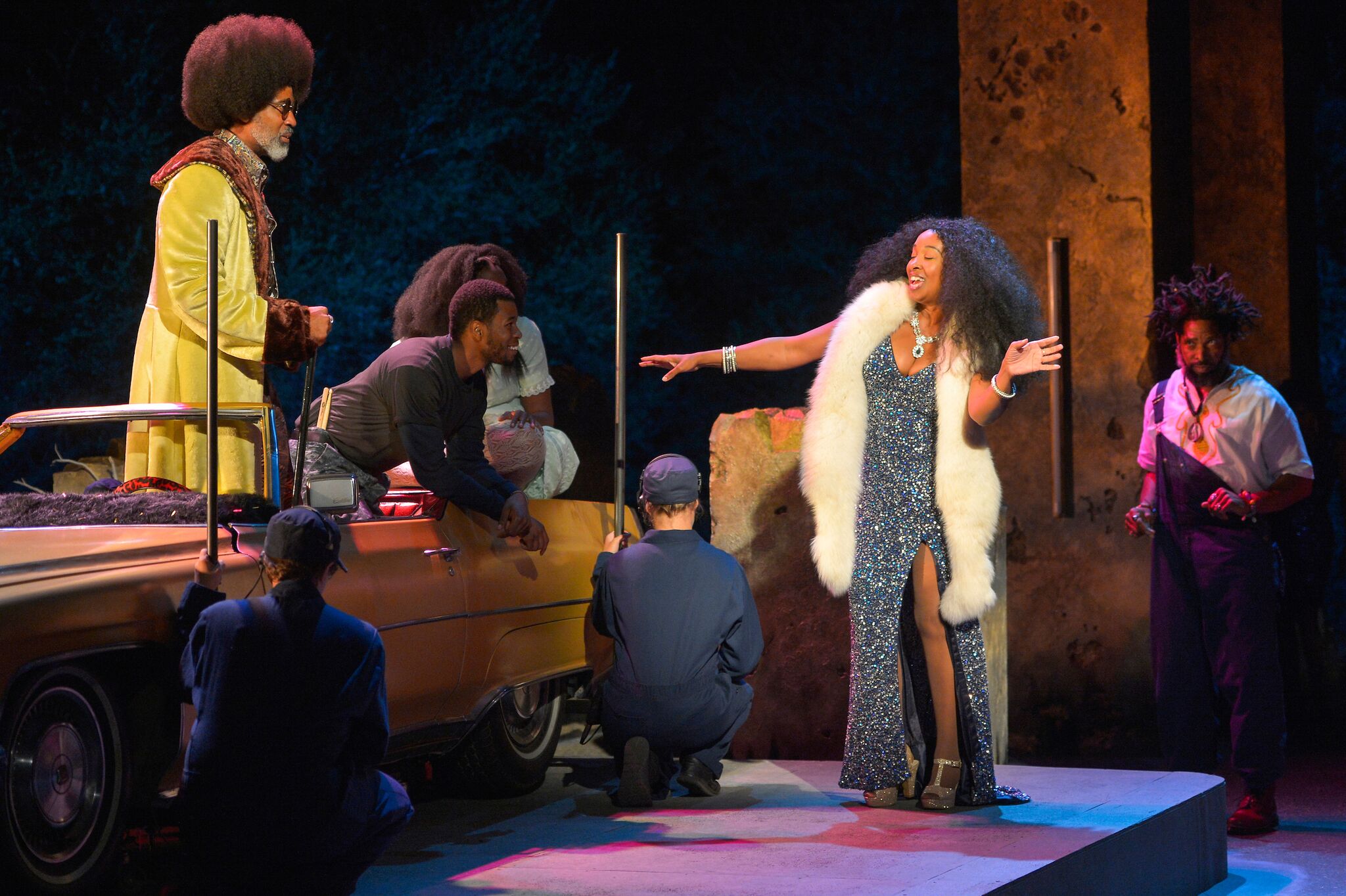 “Black Odyssey” shines with clever, lyrical dialogue, abounding with rhymes and puns—in a battle of chess and wit between the gods. They are playing to control the fate of our hero Ulysses Lincoln (wide-ranging J. Alphonse Nicholson), as he encounters PTSD, storms, and seduction. Nicholson makes his presence felt always, setting the pace with his drumming and disciplined physicality.

Though the two “gods” compete for Ulysses Lincoln’s fate, they have no dominion over his soul. Our hero, Ulysses Malcolm Lincoln, goes to war like his ancient Greek namesake. But his long homecoming begins on the battlefields of Afghanistan instead of at the walls of Troy.

A few scenes replace the rhythmic pacing with story-telling. Award-winning playwright  Gardley, an Oakland native, uses many different kinds of music to enliven the tales. The passionate percussion, lyrical lingo, and full-fledged songs urge us to tap along.

As a U.S. war veteran, Ulysses has lost his sense of self. Scenes of a cop pointing a gun at a black teen at the Fruitvale Station blur into Ulysses pointing a gun at an Afghan child. Because Ulysses cannot cope with civilian life, the pressure on him leads to disaster. He spirals out of control until he can find strength through his ancestors.

Luckily, Ulysses’ ancestor, the goddess Athena a.k.a. his Great Aunt Tina (brash and bold Margo Hall) is watching out for him. Hall plays Aunt Tina (Athena) as wise with a side of arrogant, bringing the goddess down to human level. Their family bond keeps Ulysses Lincoln from unraveling. Back home, his pregnant wife Nella Pell (compassionate Omozé Idehenre) makes difficult choices for herself and her son. Like Homer’s Penelope, Nella Pell has to assume that her long-lost warrior-husband is dead.

When Ulysses’ son Malachi (earnest Michael Curry) begins to act strangely, the father-son dynamic unfolds. Ulysses is racing to reclaim Nella Pell from a devious suitor. Now, he is also trying to save his son, Malachi, from the home-grown war in Oakland.

The entire play is a love letter to the Bay Area. Ulysses rows himself home through the Bay using the Oakland Tribune tower as a beacon. We hear the hum of BART trains whizzing by, making whirring sounds we all recognize.

“Black Odyssey” does more than glorify and mythologize the Bay Area: Marcus Gardley holds up a mirror that shows the wrinkles and scars of our home. At Cal Shakes, you can feel the thrill of music, dialogue, and struggle that we live with, everyday, in Oakland, San Francisco, and the whole Bay Area. Make Cal Shakes beautiful amphitheater under the stars your destination. It’s a trip well worth taking.