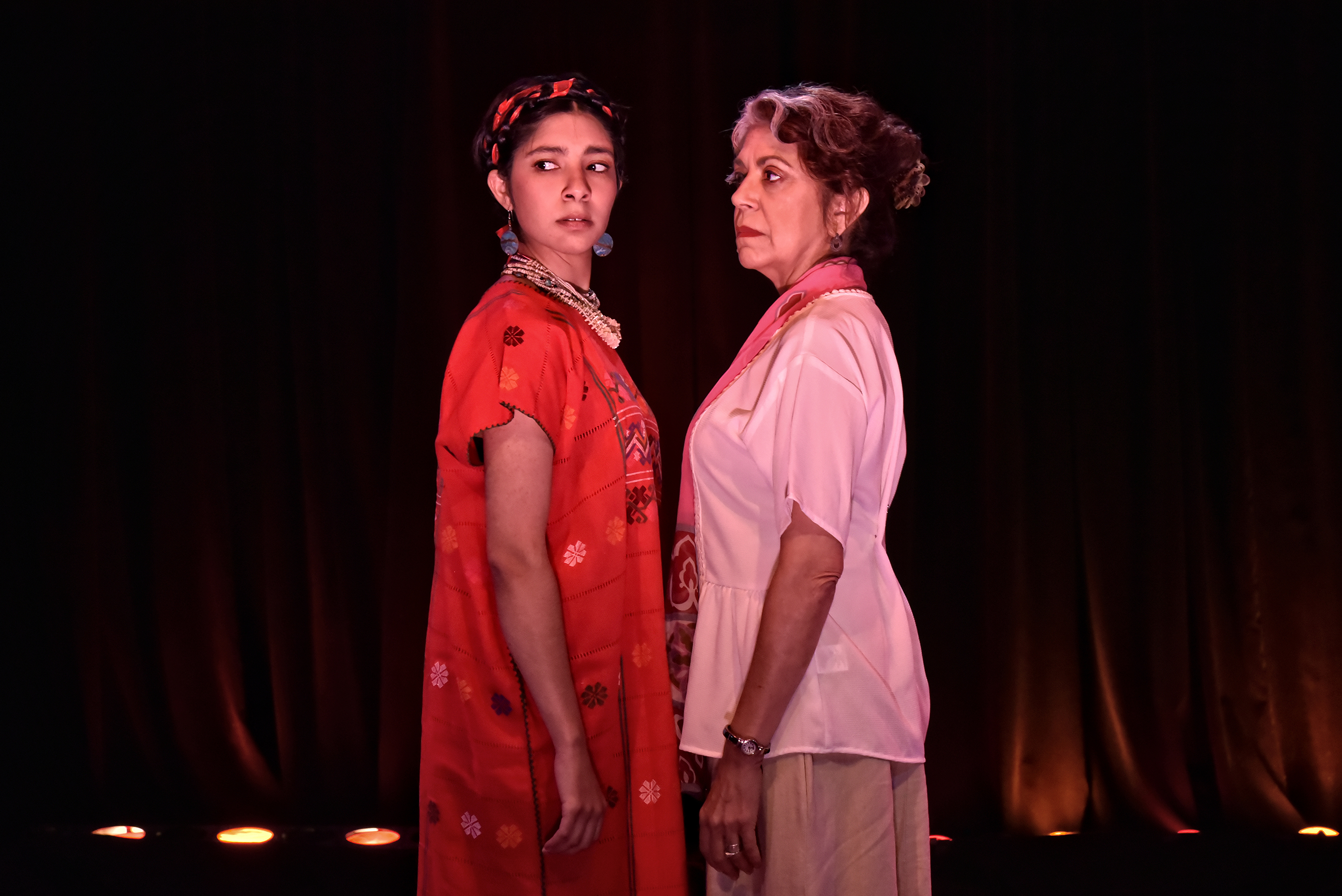 Cherríe Moraga Works Our Imaginations to the Limit

by Bhavani Bindiganavile and Ben Sloan

Cherríe Moraga’s “The Mathematics of Love” toggles between Mexico’s early colonial period (roughly 1500) and our contemporary time. Moraga challenges us to see the world through the eyes of a Chicana. All her characters have a past and present version of themselves—shuttling us rapidly through Time and Space.

The show opens to Peaches (Rose Portillo) and her white husband, Poppa (George Killingsworth), discussing plans for their anniversary. On stage, we see a small pueblo-style resort, with checkered yellow-orange squares dotting the stage. A natural, worn wooden beam hangs above.

Peaches’ memory is faltering from the effects of Alzheimer’s. Peaches is mystically connected to Malinxe (Veronica Maynez), the Atztec woman who served as advisor and mistress to Hernan Cortés. In the 16th century, Cortés spearheaded the Spanish conquest and genocide of millions of indigenous Native Americans. At the Brava Theater, Malinxe has supernatural powers, moving from her Aztec self to a 21st century caricature of herself.

Moraga employs multilayered symbolism that sometimes enlightens and sometimes complicates the plot. As a young woman, Peaches was given away to a local casino owner by her mother; while Malinxe was sold as a slave to Cortés. Moraga portrays these two Latinas as scorned and hurt by their mothers’ choices. But the story becomes elusive when Portillo plays both Peaches and Malinxe’s mother.

The modern Malinxe has the advantage of historical memory, while the 16th Century Malinxe feels guilt and shame over her role in the destruction of the Aztec kingdom. Malinxe no longer can claim to be ignorant about the betrayal of her people.

The playwright asks: After 500 years, why are Mexican woman still weighed down by the history of the brutal Conquistadors? How have women survived under Anglo and macho cultures?

Moraga uses Malinxe to represent the conflicted emotions of Chicanas who are forced to depend on patriarchal rules and tyrannical husbands. Malinxe, the Aztec slave-mistress, mourns her lost culture, trampled by the Spanish.

Moraga uses Peaches’ Daughter (Sarita Ocon) to introduce opposition to the cycle of oppression. The nameless Daughter goes to nursing school and paves her own path.   However, she cannot escape the history around her. Because she is a woman, she must force her way through the circle of male dominance.

Cherríe Moraga’s “The Mathematics of Love” feels like a calculus problem:  the complex question of how to create and retain Chicana and Native identity still stumps us.

How can we put a stop to the historical subjugation of colonized women? Moraga’s dramatic ideas emerge, slowly and subtley, from her World Premiere play at Brava! for Women in in the Arts.

“The Mathematics of Love” written and directed by Cherríe Moraga, with Ricardo A. Bracho, Assistant Director Karina Gutierrez, at Brava! for Women in the Arts, San Francisco, through Sunday, August 27, 2017. Info: brava.org