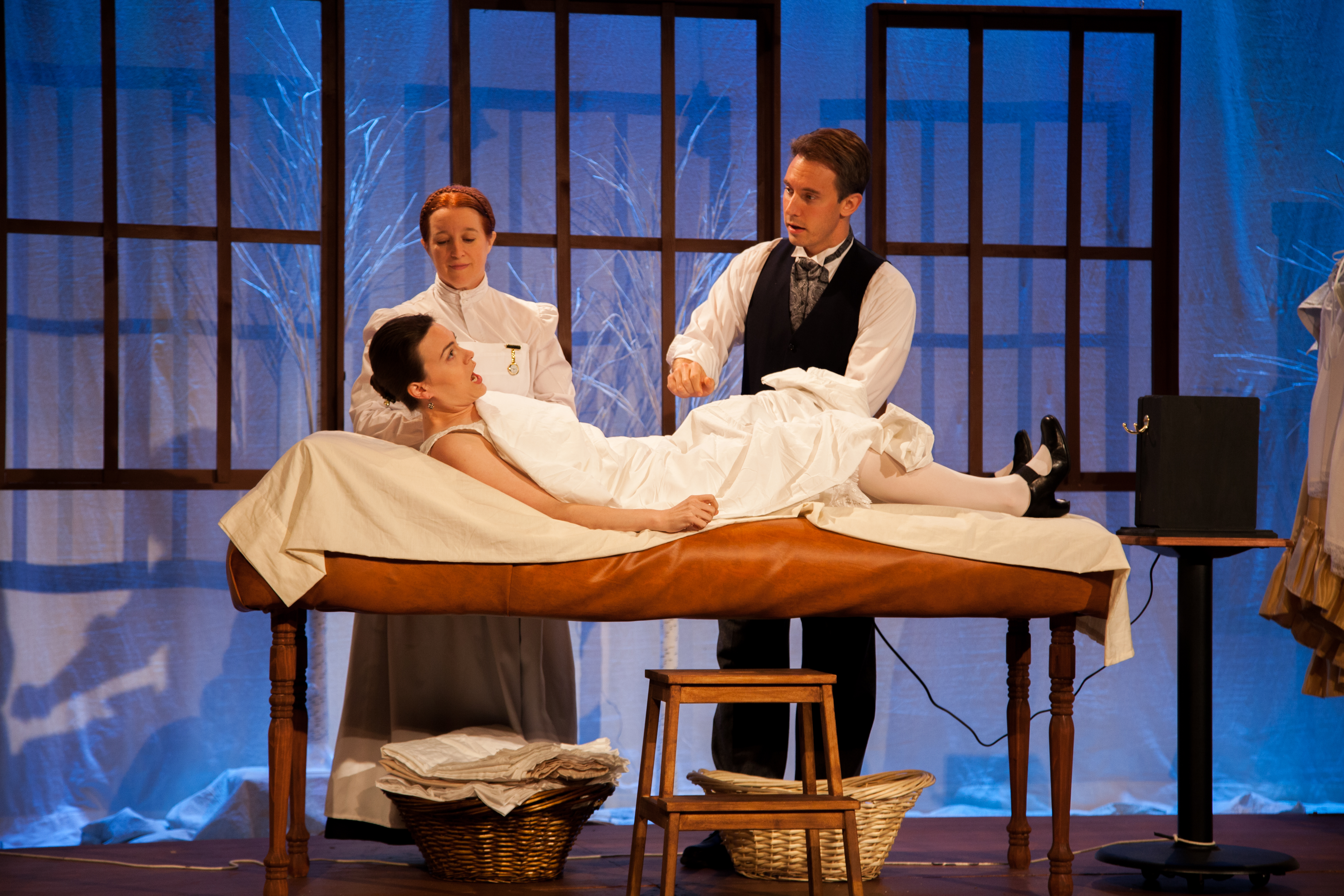 Sarah Ruhl’s humorous and poignant play seems to be about quaint, yet effective 19th-century sexual vibrators. Later, we realize that the machines she depicts are cunning stand-ins—symbols for the arts themselves and how they stimulate our senses.

It’s the 1880s in a New York “spa town.” The two main characters are women who suffer from sexual ignorance. They know nothing about orgasm and have yet to experience it. Their husbands are clueless about women’s need for sexual pleasure. One of them is Dr. Givings (genial, rat-tat-tat talker Brad Satterwhite) an enthusiast of the Second Industrial Revolution and its inventions.

The good doctor is dedicated to the touch of electric vibrators to “cure” women of “hysteria,” at that time an almost mystical term for “female problems.” Along with his nurse-assistant Annie (dutiful, solid Stephanie Crowley), he practices a thriving business at his home “operating theater” in the “next room,” adjacent to his parlor. His apparent sense of propriety keeps him from informing his wife (April Culver, splendid) what he does there.

Playwright Ruhl presents Givings with two patients, Sabrina Daltry and Leo Irving (Dunphy and Lewis), whose treatment with his devices transforms their lives—and the lives of everyone around them.

Givings’ “next room” is the unknown country for the discovery of sexual release, the experience of which unleashes a whirlwind of emotional complications for the characters. Their travails lead them, and us, to a heightened awareness of “all types and shades of love.” We learn that science cannot explain love, neither then nor today.

“That is why we have poets,” says Dr. Givings as the importance of love in his life dawns upon him. All scientists can do, he concludes, is “classify the maladies arising from the want of it.”

Ruhl is the poet of yet another “next room” of special stimulation, the stage. There, the sound of her language can transfix our attention. Rather than using consistently realistic dialogue, Ruhl distributes marvels here and there with the music of her words.

Leo, whose painter’s block is removed by Givings’ treatment, explains why “November is the tallest month.” Our ears are tickled when he proclaims, “Sugar is for women and small fat boys.” We savor the simile when a soaked Sabrina reveals she looked “like a drop of water on a branch.” We imagine the sight of Leo’s painting, which attempts to express “the memory—of the movement—of very particular hands.” Ruhl’s people provide us with a gateway to the ineffable.

Noises come from the next room, causing Mrs. Givings to investigate. But we are already aware of the importance of sound in Ruhl’s world by the presence of a vibrating machine in the parlor—the Givings’ piano. Patient Sabrina plays the piano three times. Each piece she plays (miniature masterpieces by the unfortunately uncredited Jonathan Bell) shoots an increasingly emotional dart at the on-stage listener.

Clarke’s entire cast (including Troy Johnson in his fine rendering of a stolid Mr. Daldry) is up to Ruhl’s challenges. With all the poetry and symbolism, we still experience passions simmering under Victorian psychological constraints—until they boil over. Lewis’ and Dunphy’s performances as vibratees Leo and Sabrina flood us with seas of emotional cross-currents—and Dunphy’s face is an ocean unto itself. See them and believe them!