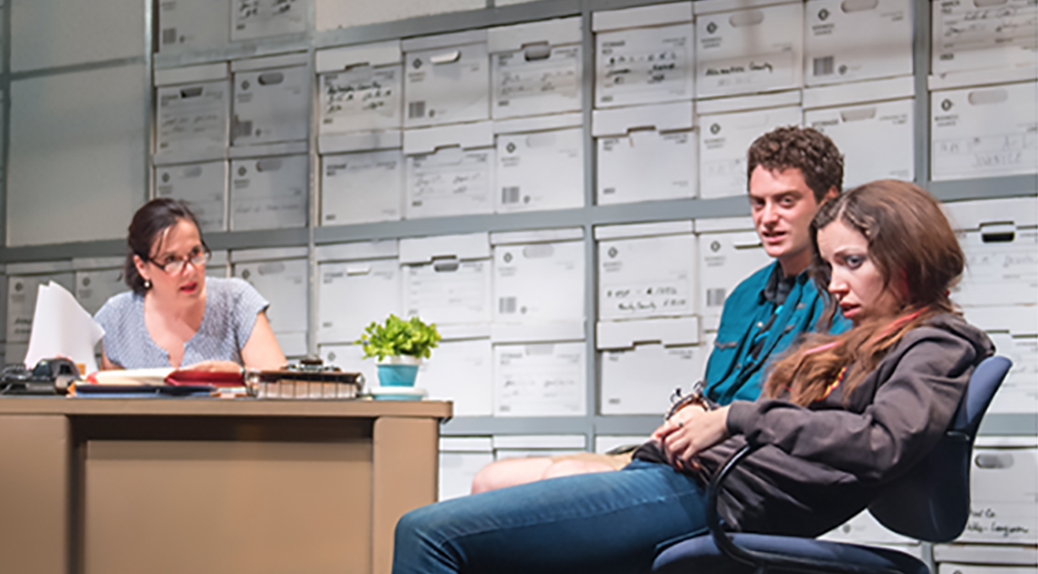 Are you considering a career in social work? Want to be a hero? Well, you will get a whiff of reality at Rebecca Gilman’s harrowing, almost documentary-style “Luna Gale” at the Aurora Theatre. There, I followed a social worker as she tries to do her job in 14 scenes, each with a place and time projected over the stage, like a “Law and Order” procedural. Each scene depicts an interview immersed in Kate Boyd’s clever set, which consists of walls of oppressive document boxes.

Distressingly, I felt the social worker undergo the Three Downsides of a career that leads to burnout in 48% of its practitioners. (It’s true! Right from Google!) Lucky for me, I could walk out afterwards. But that job is SCARY, so I will resort to dry reportage to shield you from the full wallop. Now come with me, to the Downsides Three:

We are somewhere in eastern Iowa. Caroline, a highly professional social worker (spot-on Jamie Jones), knows the procedures like Roberts knows Rules of Order. We see her lead three clients through the maze of options, probabilities, and outcomes based on her years of experience. She knows that rehab rates for drug users remain low. Yet, we can sense she is steeling herself from a looming danger: Caroline, only two years away from retirement, might be taking her cases too personally for her own good.

We meet her when she walks into a hospital room to counsel her latest charges, a couple of meth addicts. Their baby, Luna Gale, is the subject of a custody battle instigated by Luna’s maternal grandmother Cindy (Iowa stubborn Laura Jane Bailey). Caroline’s instincts side with the parents. But the mom Karlie (marvelous mood-shifter Alix Cuadra) bounces around, high as an elephant’s eye on a kite.

Peter (nice-guy dad Devin S. O’Brien) is so zonked that a whack with a Louisville slugger would not budge him. Caroline lets us know, as we filter through her bureaucrat’s lingo, that she still cares, though her vain hopes may doom her, and even her clients.

Later, in Caroline’s office, another client seems to be heading toward real success in college. Caroline rewards Lourdes (a sympathetic Jennifer Vega) with a teddy bear with a big red heart on his chest. But, oh no! Lourdes now has a mysterious new fish tattoo. Does that mean she is starting to go downhill, again?

As Caroline delves into Teen Mom Karlie’s earlier history with Grandma Cindy, she smells child abuse from a stepfather. Not only does she have to pry through abuse denials from both Cindy and Karlie, but ghosts from Caroline’s own past rear up to haunt her. She re-experiences her own past traumas, vicariously, through the present ones of her clients.

Caroline can fill out forms and send them to distant offices, but who can she talk to? Wanly, she tells Karlie, “There’s no help out there, but I’ll get you some as soon as there is.” Her new proto-Nazi boss Cliff (hardballer Joshua Marx) is no help. He’s antagonistic, and determined to implement budget cuts. Caroline is a Lone Ranger without a Tonto.

To make matters worse, supervisor Cliff has a church connection with Cindy that brings “end-times” Pastor Jay (a resonant Kevin Kemp) into the fray. Does Caroline have a prayer? Given the pure-of-heart social worker, the incompetent parents, the meddling grandma, we have a pot boiling that holds our attention and fires up our empathy. We are reminded that terrible drug-wracked lives like Caroline’s clients’ go on every hour of every day. Meanwhile, oblivious folks worry over the Raiders moving to Las Vegas.

I must report that the playwright rides rather hard on evangelical Christians. Only Kemp as Pastor Jay seems a completely believable evangelical. I could not detect a born-again “glow” from Grandma Cindy and Hardball Cliff. Such would have provided more nuance to a unsympathetic aspect of the script.

Director Tom Ross and his acting team do an outstanding job, keeping us rooting for Caroline in her uphill battles. The Aurora has done us a service with Gilman’s 2014 play in recognizing the psychological strains that dedicated government social workers face. Fortunately, Gilman does leave us with a glimmer of hope for the baby.