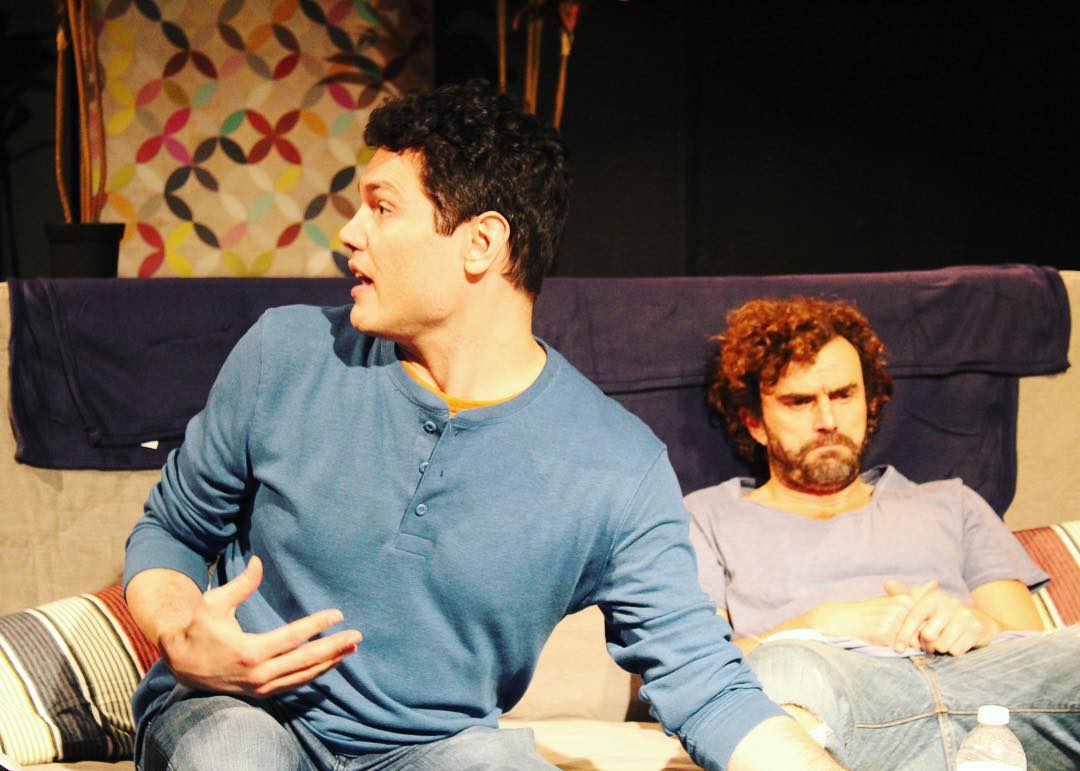 In Man’s Search for Meaning, Viktor E. Frankl describes an “existential vacuum”: people “haunted by the experience of their inner emptiness, a void within themselves.” Searching for answers outside themselves, the characters in Stephen Adly Guirgis’ sharp New York comedy orbit the void, hoping to fill it with drugs, love, sex, violence, or even nutritional beverages.

Set Designer Travis Clark and Director Peter Allas have wittily created settings for Mojo Theatre’s small space, offering us a terrific sense of immediacy. Movement in the space involves us with the characters in a Lower East Side New York apartment, from start to finish.

“The Motherf**ker with the Hat,” by Pulitzer Prize winner Stephen Adly Guirgis, centers around Jackie (magnetic Byron Haigh), a former small-time drug-dealer, in scuffed boots and a battered bomber jacket. Recently out on parole, Jackie is excited about his new job and his future with his long-time girlfriend, the sexy Veronica (spiky, appealing Sandy Sojo). But his mood quickly turns volatile when he discovers a mysterious hat in their apartment, and begins to suspect Veronica of playing around.

Jackie and Veronica have chemistry—together since the eighth grade, they have plenty of drama, too.  But Guirgis develops a touching sweetness between them, even if it is based more on sharing pie than emotions.

After an unsettling plot twist, Foster’s masterful portrayal makes us feel like Ralph D is a good guy giving good advice, even when he’s spouting corrupt, self-serving platitudes. Ralph D’s wife, Victoria (bold, believable Janelle Jacoban), gradually loses her patience with the lies swirling around. It’s a treat to watch her hit the end of her tether and reach for the emotional dynamite.

In recovery or not, we see the addict’s religion of “Yes, but…” Whether they’re using substance or other people, some lie, while others frankly confess—but it’s never their fault.

Veronica boasts about being highly functional despite using drugs; she accuses Jackie and the Alcoholics Anonymous crowd of all being “phonies.” We hear her terminally hurt feelings, her longing for love, and her self-loathing. But rather than provoking empathy, her personal pain is a free pass for bad behavior.

Those in A.A. fare no better: they illustrate the toxic side of self-acceptance. The only thing that really matters in AA is not using drugs or alcohol—using people seems to be fair game. They transfer their ends-justify-the-means view to “staying clean,” but refuse to face their underlying problems.

As Julio, Carlos Reyes Hailey gives a delightful performance as Jackie’s sharp-dressing, health-and-fitness-pushing cousin. The only non-addict in the play, Julio tells Jackie the truth about himself—a breath of sanity!

As we watch the betrayals and revelations coalesce around Jackie, it’s like reaching the top of a roller coaster. As the truth drops out from under him, we feel the vertigo, scrambling for any foothold. Conversations turn into prisms, each character offering us one believable but exclusive facet of truth.  But the void at the center of their lives offers no solid ground.

“The Motherf**ker with the Hat”—this dark, no-holds-barred comedy—pulls off the hat-trick of being smart, funny, and meaningful. This Four Lost Souls production is a hit!