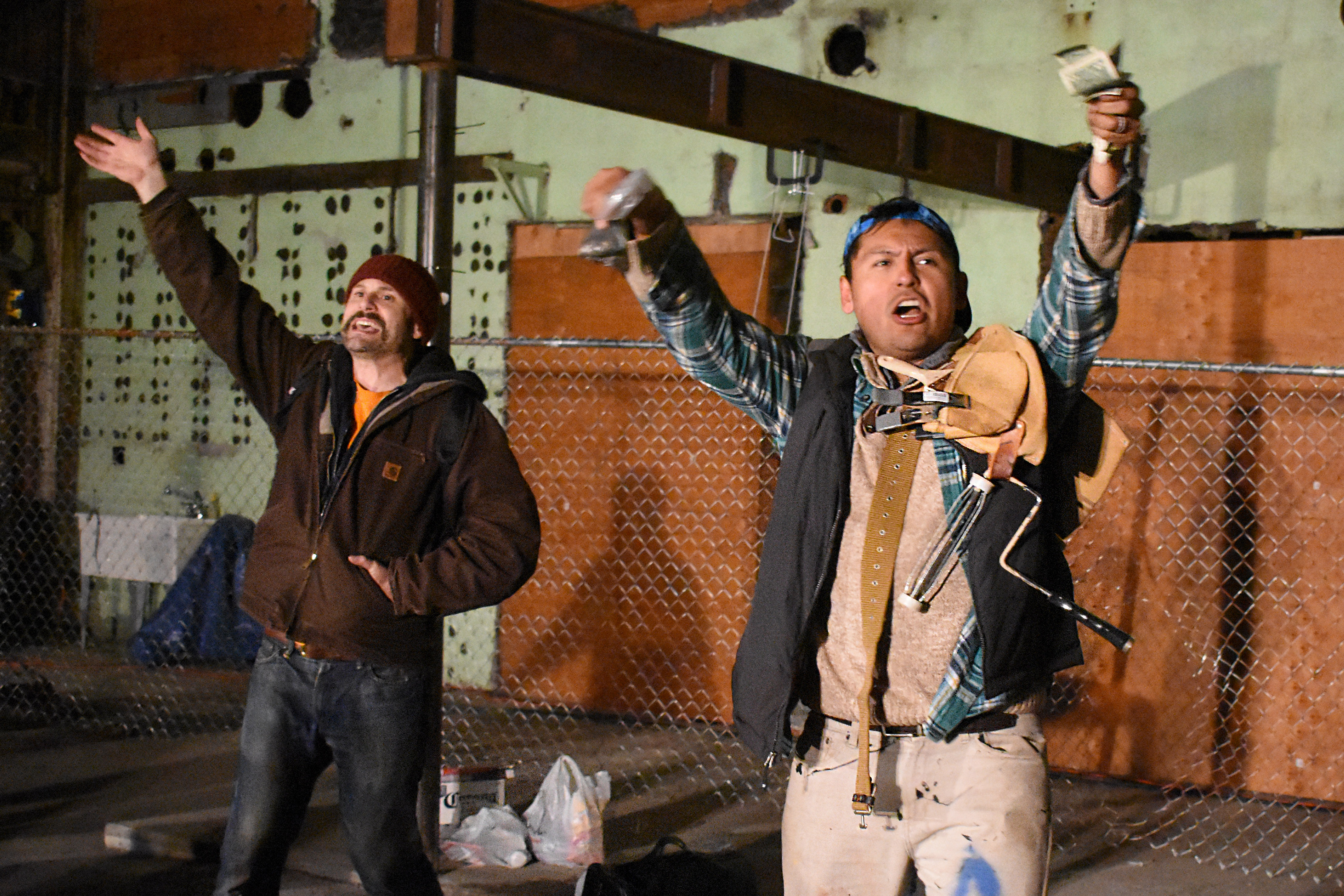 In “American Jornalero,” director Tioni Collins takes a harsh and revealing look at the lives of four day- laborers who gather on a bleak street to look for work.  Only a cell phone and a graffiti-covered pay phone connect them to the world.  The four workers anxiously await calls—for a job, or even a lead.

Ed Cardona Jr.’s “American Jornalero,” which premiered in New York in 2012, becomes a site-specific drama on a West Oakland street. Tioni Collins pits the four workers against the harsh industrial street, close to Mandela Boulevard. We are waiting for work with them.

Ubuntu Theater Project’s timely, powerful, and intimate show puts us in the middle of crippling, outdated immigration policies. I was struck by actors’ passion and conviction, as they superbly convey hellish street corner waiting. We wait with them on the real, barren West Oakland street for an elusive meager wage.

First comes Marcelo (handsome Christhian Ayvar) dressed for work and carrying a leather toolbag.  Soon, he is joined by another laborer, who greets him in Spanish, eager Luis (Jose Rodiguez), carrying lunch box and tools. They complain about the lack of jobs and their burning need to support their families.

Belligerent Michigan (Juan Berumen) comes through a hole in the fence. They are joined by a lanky Belorussian, ironically named Montezuma (Benoit Monin), who speaks three languages, but who identifies with his fellow workers.

Here, semi-outdoors, in industrial Oakland, we feel the frustrations of legions of day-laborers, some legal, some not.  Each aspiring worker has a story of hopes and fears for his family. We cannot turn our eyes from them. Director Tioni Collins makes sure we see these itinerant immigrants as human beings, like ourselves.

We hear cars passing by, raising hopes for work, as the guys cry out: “Cheap labor here!”  Their hopes are crushed as the cars pass into the distance. Other cars pass by, filled with demonstrators headed to protests downtown.  But our four day-laborers must wait it out.

Although the four guys compete, they are also comrades. They observe the etiquette of waiting. Anxious and needy, each man implores the others to include him on a job. Their dialogue shifts between Spanish and English, and although we don’t understand every word, their passion conveys fear, disgust, and despair.

Tension mounts with the arrival of bumbling Mark (Paul Rodrigues), a white laborer. Mark serves as a spy for the officious Toby (blustering Ted Zoldan), who has taken it upon himself to discourage the Jornaleros from using the corner. Mark’s appearance on the sidewalk upsets the delicate balance, creating anxiety among the Latinos.

The laborers complain that their spots are being raided by ICE and you can sense their distrust of the newcomer.  They cannot intimidate him, and the conflict boils over.  Mark angrily shouts that the “illegals” are taking his job, working for lower wages, taking his work.

In Cardonas’ “American Jornalero,” fear and hostility hang in the air. These essential workers face constant harassment from passers-by, and from employers who underpay, or refuse to pay.  On the edge of violence and without hope, we live on the edge with them, and feel their lack of money and hope fading away.