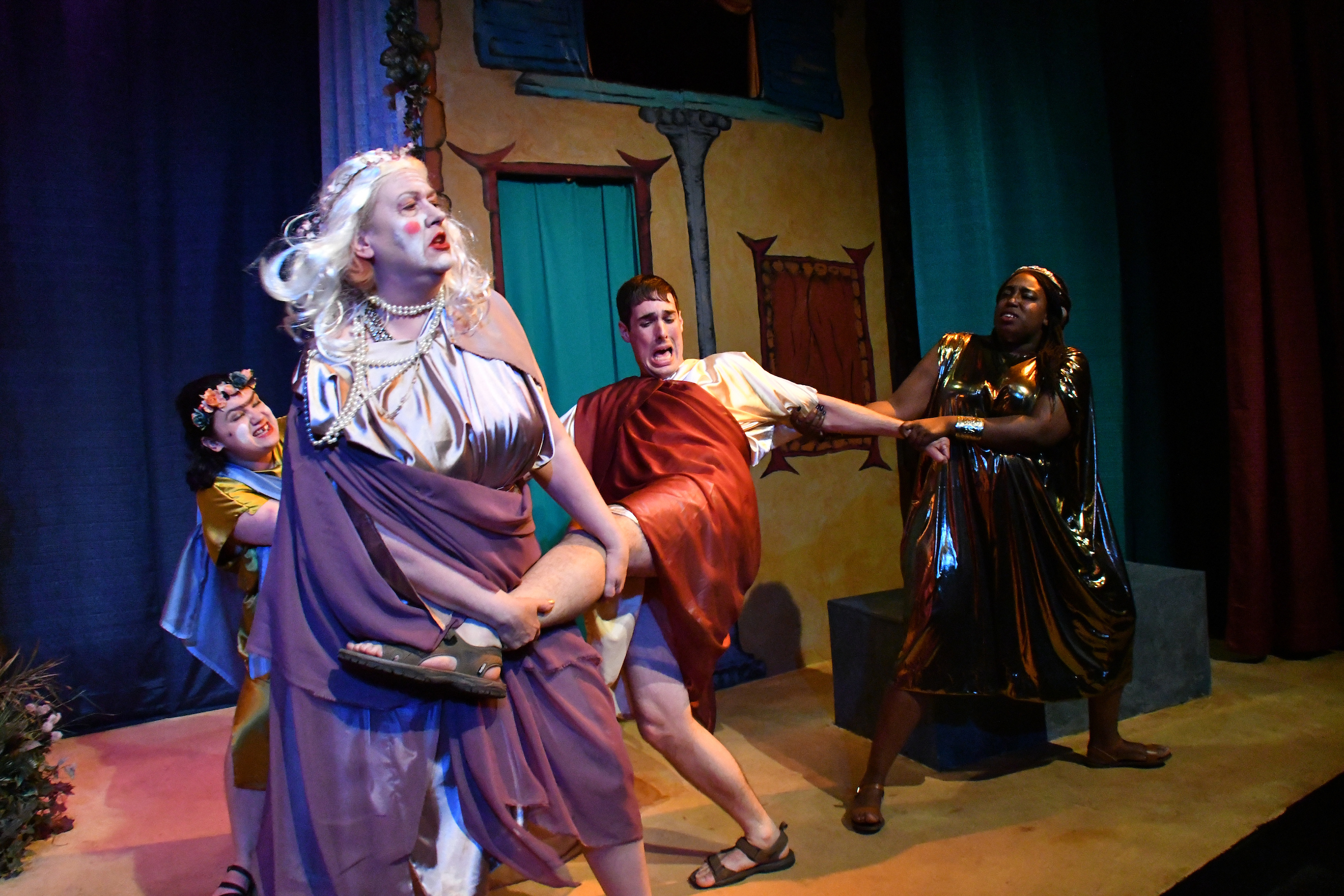 Do America’s raging factions disturb you? Does wealth inequality frustrate you? Do you despair over absurd government leaders? Aristophanes felt the same way in 391 B.C., according to his satirical comedy “The Congresswomen.”

Stealthily, Athenian women meet in front of two vibrant peach-hued houses.  They steal their husbands’ clothes, don false beards, and storm off to take over the Congress. At dawn, they elect their eloquent leader, Praxagora, head of state.

Nicole Odell’s Praxagora is charming and confident as she implements radical revolution. Private property is abolished and all wealth is now shared, freeing people to follow their personal interests. Children will be raised in common, meals eaten together in the old judicial chambers. Neither crime nor lawsuits will exist in her brave, new world.

Then, Praxagora outlaws marriage and proclaims sexual freedom. Any woman or man can have sex with the young, good looking partner of their choice—so long as, first, they grant sex to an old or ugly partner. Everyone gets to share sexual wealth, too.

Husbands awake and notice cloaks, shoes and wives missing, in that order. Praxagora’s husband, Blepyrus (Steven Westdahl) has only his wife’s gown to wear outside, to relieve his tormenting constipation. Neighbor Lychus (Elliot Lieberman) suffers a heroic erection, but no wife.  Westdahl’s blunt, endearing presence, wins us over, especially when he pops into the audience.  With wide eyes and gaping mouth, Lieberman displays his impressive comic talent, as he leans from an upstairs window, conveying entire worlds before utte4ring a word.

After solving their dilemmas, the husbands learn about the new regime from a young friend, Chremes (Kyle McReddie). Earnest, innocent Chremes cracks us up with his comic, determined gait.

Stuart Bousel adapts and directs, with wonderfully sly, inventive updates. If everyone is now free for pleasure, who will till the soil and scour the dishes? Praxagora answers, “Why the slaves of course,” explaining that freedom is not intended for them. Bousel adds just enough to make it clear. Like the U.S. Constitution, freedom is intended only for the elite.

Aristophane’s scenes of old and homely women chasing the horrified and desirable, young Chremes embody every sexist assumption of 1950’s sit-coms, but Bousel redeems it with an added, inspired scene, simple and innovative, that reassured me—and others, based on the audible sigh of relief from my seatmate, mixed in with the laughter. .”

He even gives Praxagora and her husband Blepyrus a moment of equality, a brief chance at mutual understanding, which Aristophanes could never imagine.

Although the production is uneven, each actor has a stand-out moment. Nicole Odell earns spontaneous applause when her Praxagora flawlessly delivers Greek’s longest word, the 171-letter word for stew.

Clinarete (Alexia Staniotes) and Sostrate (Brittany Nicole Sims) delight us with an array of resolute faces and absurd stances. as they support Praxagora’s speechifying. Elderly Rhodippe (Amanda J. Lee) and sexy Hymenia (Andrei Garcia) enliven matters as they snipe at each other, continuously.

Laughter helps in troubling times, but the issues of our day require action.  “The Congresswomen” provides broad comedy, with sexual and scatological laughs, rather than a blueprint for reform.  Still, as we struggle with today’s injustices, the scandalous notion of economic redistribution looks pretty welcome. Odd, really, how reasonable—and overdue— that sounds.

“The Congresswomen” by Aristophanes, adapted & directed by Stuart Bousel, at Exit Theatre, San Francisco, through Saturday, May 26, 2018. Info: theexit.org