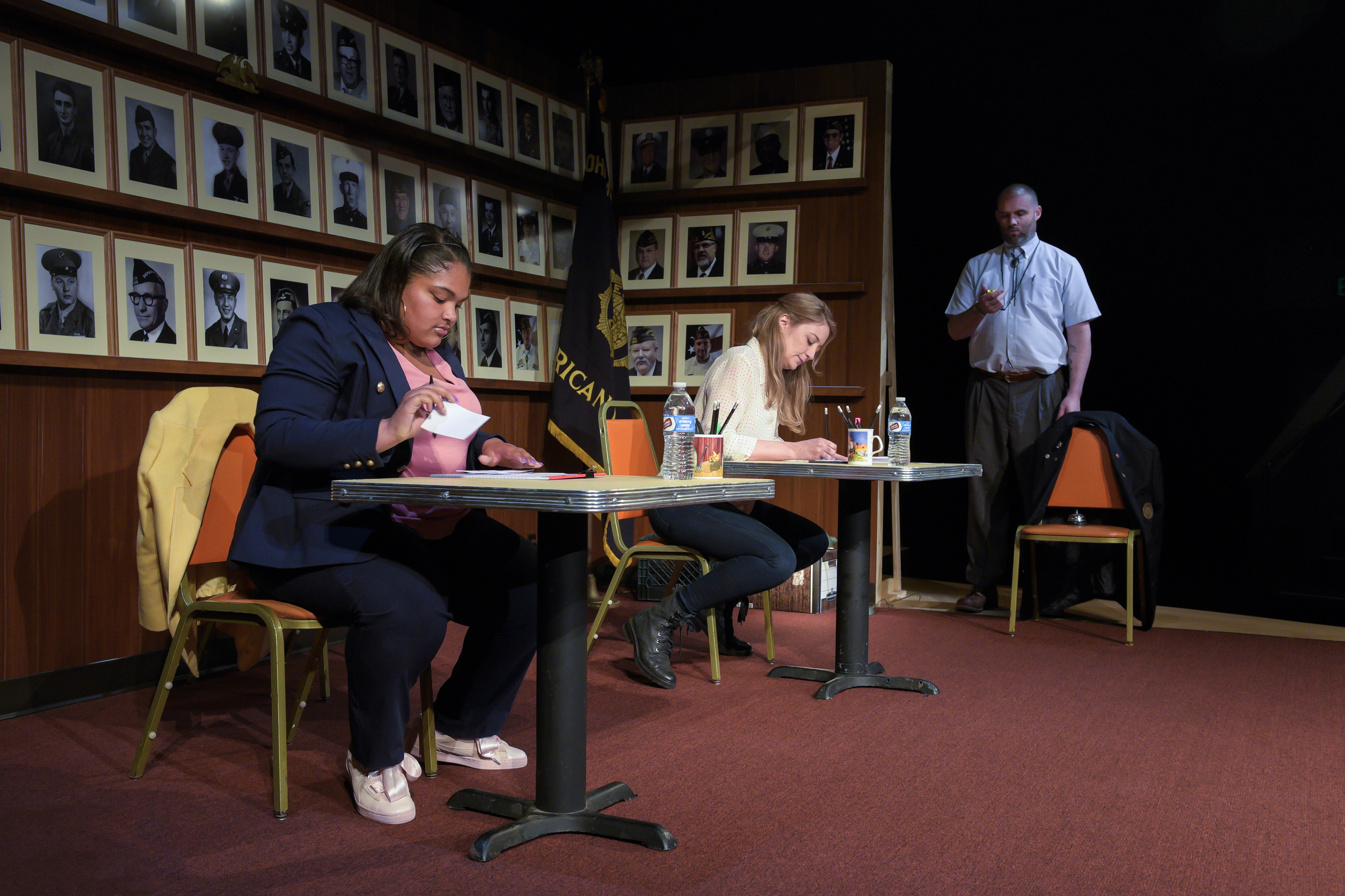 Heidi Schreck plays the Constitution like a Stradavarius, lyrically deploying Amendments in defense of the rights of women, LGBT, and minorities. Heidi acquired her skills in a series of Constitutional debates for teenagers, organized by the stingy palace guardians at the American Legion.

On stage, we are confronted with a typical mid-century, mid-western American Legion war veteran meeting hall. We could be anywhere–in Peoria, or Fresno. On the back wall hang 50+ framed black and white photographs of white male American Legion heroes. These dignitaries  lead the local Chapter of the Legion. In fact, a delegate from the American Legion soon appears onstage.

Heidi’s mother, a teacher, trained her to debate and win these Constitutional contests to earn enough money to go to college.

At 15, Heidi began serious constitutional research. And she took to it like a duck to water, writing to Constitutional scholars and developing her own debate style. She had to follow the strict requirements of the American Legion contest that demanded she invent a dominant metaphor for the Constitution.

When another competitor compares the Constitution to a vast Quilt, Heidi chooses the metaphor of the Crucible to indicate the heat and transformative qualities of the Constitution. She really gets into the details of the Amendments, evoking hearty laughter at the intensity and enthusiasm of her successful 15-year-old, go-get-em persona. Heidi still has the bounce and the brilliance of a teenage prodigy. She’s fun to watch and to listen to–and we learn a lot about the Constitution!

She explains the power of the 13th and 14th Amendments, passed after the Civil War, to protect minorities from the tyrannies of slavery. When she’s given a challenge to explain and apply the 9th Amendment, she delivers a revelatory rant that makes us laugh, together. It’s the most fascinating part of her re-creation of teenage Heidi, struggling to weaponize the law of the land.

“The Constitution and Me” features Danny and Anaya, Heidi’s inspiring friends. When Heidi Schreck, the charming and relaxed playwright, first comes onstage and tells us that her play is still in progress, we should believe her. Her show is brilliantly personal, with many angles.

Each night’s performance will be different, and the ending is up for grabs–with Wisdom Kunitez, alternating with Anaya. The only way to find out What the Constitution Means to US is to get over to Berkeley Rep and meet Heidi Schreck and her friends.

“What the Constitution Means to Me” by Heidi Schreck, directed by Oliver Butler, at Berkeley Repertory Theatre, Berkeley, California, through Sunday, June 17, 2018. Info: berkeleyrep.org