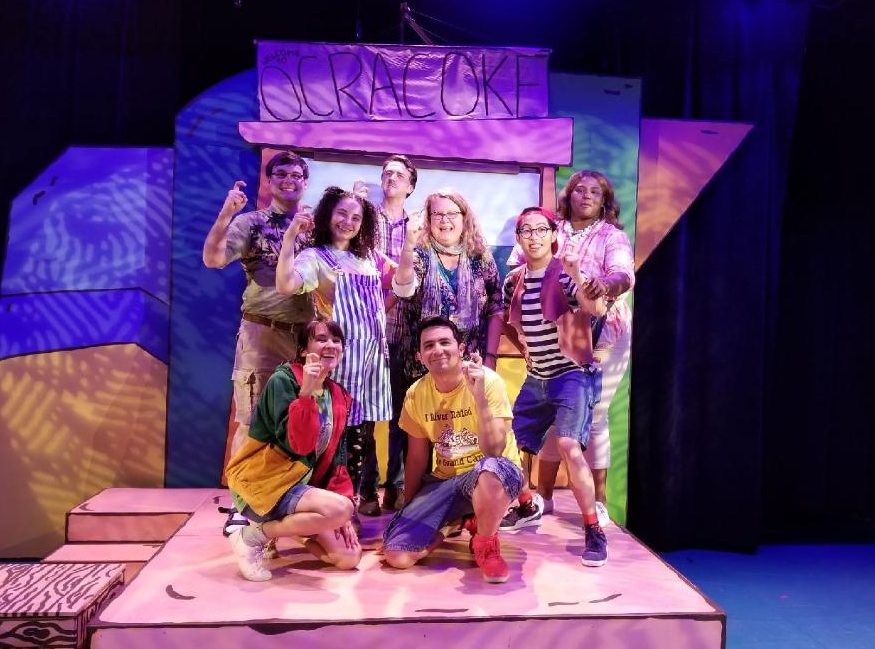 Judy Moody had a dull summer.  Maybe it was because her parents couldn’t afford to send her to fantasy-everything camp or take her to Disneyland.  Maybe her parents worked too much.  Maybe she and her brother squandered it playing video games, watching Sponge Bob, eating candy.  We don’t know, but it doesn’t matter.  We’ve all had summers that could have been better.

In fact, the highlight of Judy’s summer was a trip to grandma’s house—and it wasn’t the kind of trip that involved a wooded path, a red hood, or a hungry wolf in a grandma suit.

So, when her teacher assigns a back-to-school project on the first day, asking Judy (wild, distracted, moody, and often-screaming Alicia Piemme Nelson) and her classmates to present their summer adventures, Judy panics.

This is the premise of “Judy Moody and Stink, the Mad, Mad, Mad Treasure Hunt,” Bay Area Children’s Theatre’s most recent “swashbuckling new play,” based on the books by Megan McDonald and directed by Khalia Davis in San Francisco.  When asked to create a “me collage,” by her teacher (hilarious and can-do-it-all Justin DePuis), Judy knows she’s got nothing.  The summer was a wash, and the “me collage” project seems doomed from the start.

So it’s time for some pirates, and it’s hard to lose with pirates.

We set off with Judy, her brother Stink, and her two duller-than-dull parents, played wonderfully by Rolanda D. Bell and Nickolas Rice—the most boring, loving parents in the world.  Rice, with a hunched posture, hands on hips, cocked head, and a perma-smile, captures the camp-counselor type to a T.  And Bell, a bit more nuanced, flaunts a fanny pack and giggles with glee about adventuring to the book store.

While my parents were nothing like them, they resonate with the wonder kids feel about the dullness of adult lives. How they can get so excited about a cup of coffee or an episode of This American Life.  Since these parents seem incapable of making their children’s lives fun, Judy and Stink need to do it for themselves.  And what better than a pirate island treasure hunt?

From there, you can imagine the rest, and why spoil it?

From an adult’s point of view, Justin DuPuis is a highlight—an ensemble player who always has a clever, comic take on his character, whether it’s Scurvy Sam, Judy’s teacher, or the old key-bearer.  From a kid’s point of view, it’s Judy’s brother Stink, played by the lively Jave Hernandez—who punctuates the show brilliantly with his intuitive balance of comedy and emotion.

This show is in the theater at the Children’s Creativity Museum in San Francisco.  I took my daughter Itasca.  Because we live in Castro Valley, getting there on time was an adventure in itself—involving cars, trains, boots, and a pack mule (that’s me).  And if you’ve ever read any of my reviews of children’s plays, you will already know that I spend most of my time during the play musing about other things.  I imagine—but don’t know for sure—that is true of most parents in the audience.  The cognitive load is just not heavy enough for us to be fully “in it” like our kids—a kind of evolutionary problem of parenting, really.

And so I thought about how Judy’s story was kind of our story—how yesterday was a bit humdrum, but today we took the train to San Francisco, where we met Judy and pirates and a very funny kid named Stink.  And I endeavored to look a bit more forward to it next time as I’m leaving the house, instead of feeling so bogged down by getting to BART on time and carrying the right S. N. A. C. K. and making sure I have enough pairs of spare underwear and pants to cover the maximum amount of possible accidents in a worst case scenario for my recently-potty-trained daughter.

Don’t be that dad, I tell myself as I watch Nickolas Rice’s “Dad” in khaki cargo shorts with white socks under sandals, smiling like hell.  Do this more often, I tell myself as I see Judy’s and Stink’s hunger for new experiences and adventure.  And thank the people in your childhood who made it so adventurous, I tell myself.

So, at intermission, as Itasca and I lounge in the grass outside the theater, we call my grandmother, Itasca’s great grandmother, and wish her a happy birthday.  She’s 93 years old.  She once took me all over Italy.  She once took me all over Turkey.  “Happy Birthday, great grandma,” Itasca tells her on speakerphone.  “Oh, thank you, Itasca!  I can’t wait to see you this summer in Minnesota.  We’ll have wonderful adventures together in the woods!”