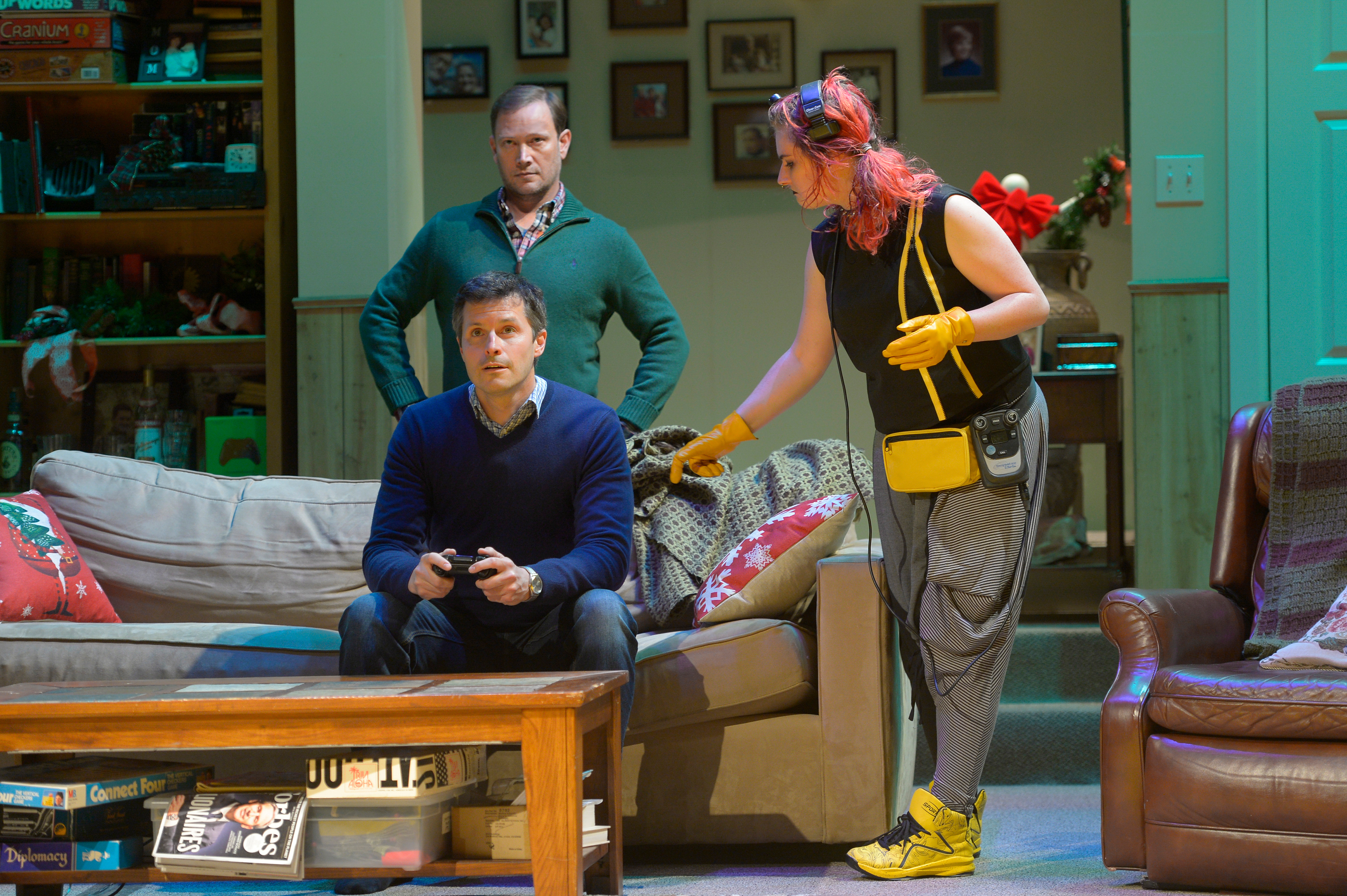 Young Jean Lee’s “Straight White Men” reminds us that we are more alike than we are different, even those of us who put on a front. I cannot imagine living under the pressure these guys endure. Afterwards, I thought: I should invite them to hang out with politically oppressed folks.

For pre-show music, director Morgan Gould bangs out an epic woman-power playlist. I feel welcome as I dance with the The Persons in Charge (gender-nonconforming J Jha) and (deliciously dry Arianna Evans). These added characters run the show and put the actors in their places.

The usual theatergoers look around uncomfortably during these POC or LBGTQ-themed plays, while they are being ridiculed onstage. This time, the Millennial Black Girl wondered if she can laugh or not.

As in a child’s Christmas book, Jha introduces the three brothers: Jake (spot-on Seann Gallegher), Drew (charismatic Christian Haines), and Matt (tender-hearted Ryan Tasker). They are spending Christmas with their dad, Ed (masterful James Carpenter). They grab our attention when they break out a game of “Privilege,” their anti-elite Monopoly game. Their Chance card says: “You don’t have any more White Privilege and the police stop you—Go straight to jail.” OK, they are not ignorant.

Dad Ed Norton listens as his sons recall their high school days. They sing “Oklahoma,” turning the Broadway hit into a parody of the KKK… complete with Nazi salute! Young Jean Lee, the first Korean American woman to conquer the Great White Way—with this play—is having her say.

The show aggressively paints a picture of White Christmas, until Matt does the unspeakable: revealing his true feelings (gasp). His father and brothers make it such a big deal! They viciously over-analyze Matt’s failures, suggesting therapy, and praising him for his “low self-esteem.”

When conversation gets tense, they hide their emotions behind corny Wild West antics, eliciting more laughs. Even with Christian Haines well aimed comedic timing, I start to check out. The corny dialogue gets tedious. Perhaps Lee thinks so as well.

Tasker sensitively shows Matt’s difficulty in expressing himself. Matt lives under SWM pressure to be successful. As the designated victim, Matt can barely look his family in the eye as he speaks his truth.

Young Jean Lee’s “Straight White Men” should be called “Corny Straight White Men.” These three brothers hilariously communicate by firing fake guns and threatening to pee on each other, while their father laughs, along with us.  Not a care in the world.

Are we laughing with them or at them?  OK, I was laughing at them. But after the show, I wanted to play a song to let them know that we’re all far from perfect. Women of color feel it all time. For another view of SWM, see:
straight-white-men-speaks-to-all