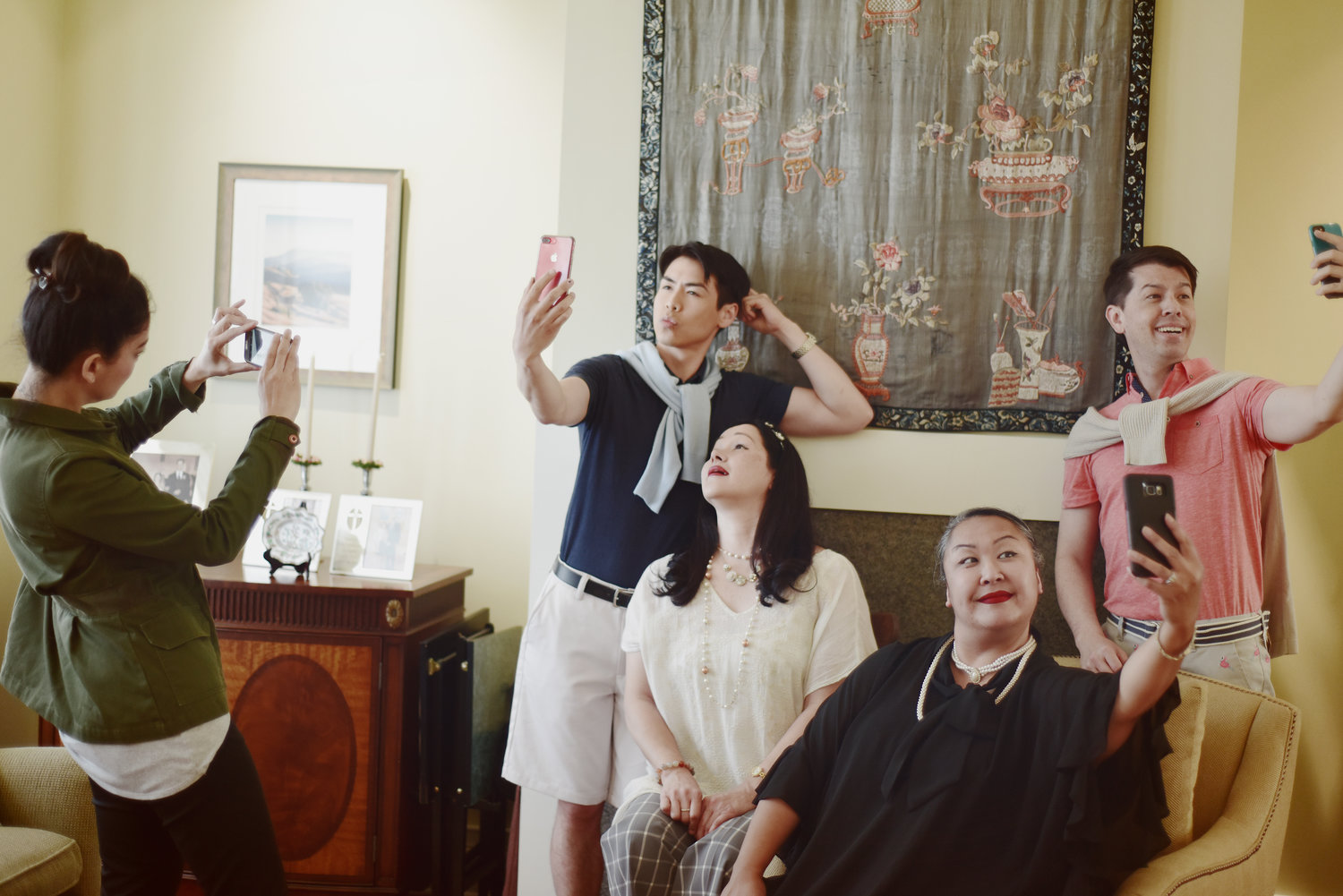 Leah Nanako Winkler is on a mission.  She’s tired of the old theater formulas:  white folks sitting around the dinner table airing their angst, exploding their family myths, and then closing ranks against any outsiders. In “Two Mile Hollow,” affluent whites are targets of satire with a double twist: Asian actors play exaggerated versions of all the white folks.

Winkler pursues the privileged Upper Crust portrayed in “white people by the water plays,” the highly educated who avoid work. These Yalies sport a strict WASP wardrobe—bow ties and seersucker suits. They while away their summers in the Hamptons.

The Donnelly family has gathered for the last time at their East Coast summer homestead, each an over the top parody of personalities from well-known plays. Here you have the ingredients for family mayhem.

Self-loathing daughter Mary (Karen Offereins) communes on the porch, pretending she is a bird, a fantasy she needs to soar away from her disdainful mother Blythe (Michele Talgarow).

In true co-dependent style, Mary’s sole occupation appears to be taking care of Blythe. This manipulative, pill-popping, controlling mother claims to have cancer to cover her drug habit and elicit sympathy. Are you feeling Eugene O’Neill, yet?

Into this toxic mix, add striving Charlotte, a ‘person of color’ who works for Christopher, taking care of him professionally and personally. Charlotte sees Christopher as her ticket out of her servitude. She hopes his Hollywood connections will elevate her to writer and producer.

Pretty Charlotte (talented Rinabeth Apostol) gets sucked into the affluent Donnelly family vortex. Rather than holding up a mirror to the insufferable Donnellys, she falls for pathetic Joshua. Will marriage to him provide a step up?

“Two Mile Hollow” banks on physical humor, with Joshua and Christopher smearing their faces with dirt to show their feelings. Other family members freeze the action by suddenly spouting passages from Anton Chekhov, Tennessee Williams, Tracy Letts, and other “white guy” dramatists.

Winkler’s characters suddenly act like birds, cawing again and again. They protect their nest with flapping wings and feathers. Using satire and comedy, Winkler attacks persistent class and racial injustice in the U.S. Despite the Donnellys’ promises, Charlotte is used and abused by the callous American family.

But can we believe in Charlotte if the rest of the cast is in cartoon mode? See “Two Mile Hollow” for the physical entertainment it offers, and witty resonances with classic plays, but don’t expect a full meal.