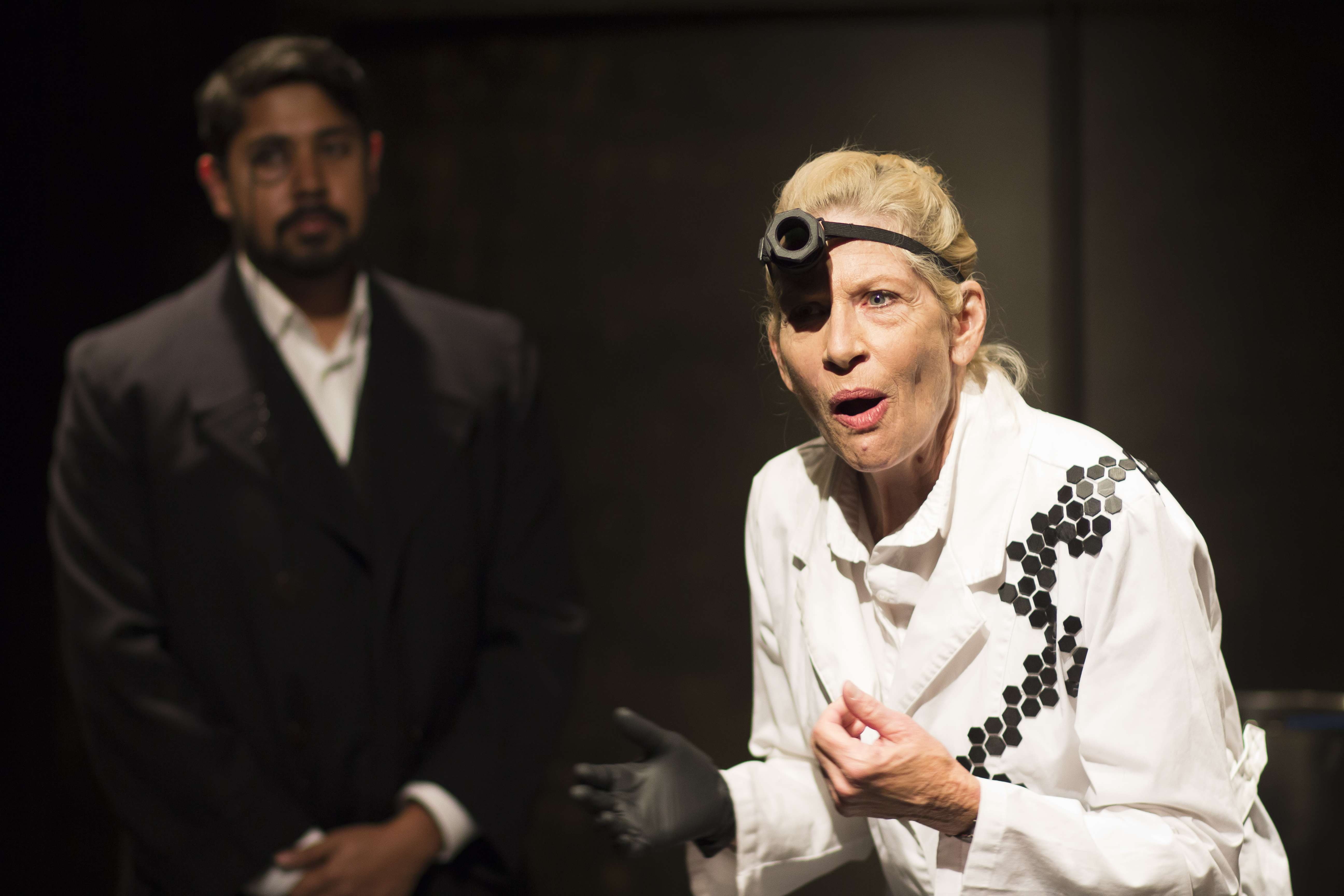 Do robots taking over the world sound too bizarre to be true?  Not if you go to see Quantum Dragon’s latest production, “Universal Robots.”

Mac Rogers’ play is based on Karel Capek’s 1920 play “R.U.R.” (Rossum’s Universal Robots), imagining a robot-filled future.  What would happen if robots created by a mad scientist, Madame Rossum (fierce Michaela Greeley), replace humans, freeing us from drudgery? And leaving room for art and music.

The first act centers on the regular Friday night meetings of Czech intellectuals at the No Name Café, where high-powered friends debate current events.  They argue passionately over which 20s political system will prove best for people: the socialism of Russia, the dictatorships of Germany and Italy, or the newly elected democracy of Czechoslovakia?

Their world is turned upside down when Madame Rossum’s daughter Helena (passionate Kitty Torres) introduces a prototype robot to entice them to her mother’s lab.  Once there, Madame Rossum offers her vision of a host of new, improved robots who will work tirelessly at jobs we don’t want to do. (Sound familiar, yet?) All she needs is the money to develop them.

Given our own increasing dependence on cell phones, driver-less cars, and internet shopping, the premise of the play proves all too chilling.

Capek is responsible for the invention of the word “robot” from the Czech word “roboti,” meaning drudge.  The playwright imagines creating robots to replace humans for drudge work, leaving time for art.

The group offers a wide spectrum of thinkers, brought to life by an excellent cast that thoroughly impressed me with their passion and fervor.  First, the playwright himself, political columnist Karel Capek (idealistic, romantic Ava Maag) and his co-playwrightsculptor sister Jo (intelligent, vulnerable Marisa Darabi) argue for art and ideas in our lives.

The club includes newly elected President Masaryk (stately, approachable Paul Loper) whose ethics are overwhelmed by “necessary” unethical decisions. We are torn between his lofty sentiments and the brutality of his actions.

Finally, we meet revolutionary Vaclavek (fierce Ellie MacBride), who ardently argues for the ideals of socialism. MacBride is also brilliant in her later role as the Robot General Sulla, startling us with cold, calculating logic for eliminating humankind.

Louel Senores really brings fire to both his roles.  As Radosh, the waiter at the No Name Café, he impresses as an obsequious but friendly waiter. And as the robot Radius, Senores’ methodical, mechanical responses exquisitely fit his robot persona.

Mac Rogers’ intelligent dialogue questions the role of art in a capitalist world.  He shows us the domination of Tech under which we are sinking.

Director Sam Tillis remarks that, as Quantum Dragon rehearsed “Universal Robots,” the irrational growth of the military industrial complex we are witnessing makes the play completely relevant, today.” Trump’s dismantling of government support of the arts, the rape of the environment for economic profit, and short-sighted planning–all sound the alarm.

Like “R.U.R.” in its time, “Universal Robots” gives us more truth than science fiction. Mac Rogers offers us a startling vision of the future. Highly recommended and important drama.