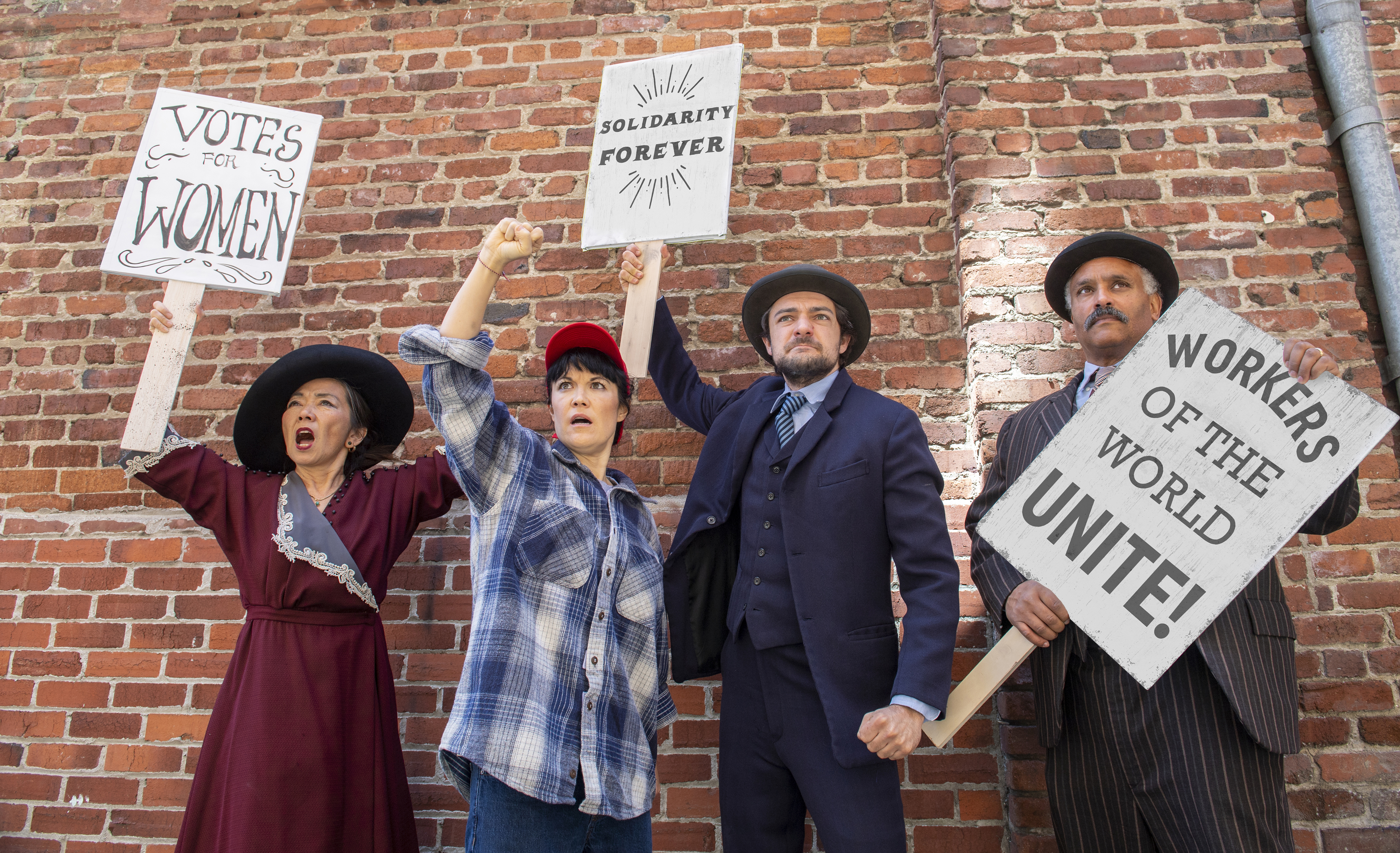 The San Francisco Mime Troupe kicks off its 59th season with a comic  musical, “Seeing Red,” in the midst of an enthusiastic Opening Day audience. A hand-crafted wooden stage, smack dab in the middle of Dolores Park, sports picket signs announcing: “Build that Wall!” and a caricature of Donald Trump. We are visiting Ruby’s Bar, along with the regulars in a small Ohio town. We are invited in, to gossip about politics and voice our complaints.

Volatile boot-wearing lesbian Bob (bold Lisa Hori-Garcia) has given up on voting. Because she lost her job and her home in the Crash of 2008, Bob is bitter and cynical about the 2016 Trump  election. Bob’s anger festers and her political views collide with the motley crew at Ruby’s Bar. Disillusioned with candidates who lie, Bob concludes that politicians dismiss the Common Person. Democrats and Republicans set us up for failure, every time. So, why bother?

In a alcoholic binge, Bob meets a mysterious stranger, in a beige trench coat and hat, who orders root beer with bitters (lively Andre Amarotico). But this stranger has the ability to transport Bob back to 1912, when Socialist presidential candidate Eugene V. Debs gained 901,551 votes. Debs’ 6% of the popular vote makes him the most popular U.S. Socialist ever.

An oversized clock hangs over the stage, with hands that signal time travel! The cartoon-style, over the top Commedia style amuses us, but then gets corny, as our flustered Bob careens about the stage in dizzying spins as she goes back to 1912.

“Seeing Red” asserts parallels between the Great Depression of the 30s and today, quite blatantly, including wage inequality and a boastful millionaire class. Most of us can correlate our Progressive past with today, easily.

Musical numbers feature the entire cast dancing to illustrate the differences between rich and poor, as they sing, “What did working ever do for the working man or woman?” Writers Rotimi Agbabiaka and Joan Holden boldly expose how right and left feel about one another.

Bob’s moment of enlightenment comes when she meets the elegant Ruby (seductive Keiko Shimosato Carreiro), herself, in a tight red dress. Proprietor of Ruby’s Bar and an immigrant fleeing any place that has a Chinatown, Ruby  reveals her secret: She is a comrade of the American Socialist Party.

Through Ruby’s trip to the Depression, Bob meets people who are fighting for child labor laws, for safe workplaces, and the right to unionize. Magical Ruby transforms Bob’s outlook on socialism.

“Seeing Red: A Time Travelling Musical” offers some admirable, but not memorable, songs. They need to turn up the Chorus and the volume to rally the workers. Being outdoors in Dolores Park, outside noises compete. The dance numbers need some work, following this hot opening day. As a time traveling musical with an enchanting concept, the show needs some time to ripen.

Though the Mime Troupe offers us insights on how similar we all are, it reduces Trump voters to hillbilly workers. A conversation between liberals and Trump voters cannot move forward if we treat each other like offensive caricatures. In “Seeing Red,” we learn, finally, that we are more alike, and that we can grasp power by studying our past.

“Seeing Red” demonstrates that  better understanding of history/herstory can close the chasm. “Seeing Red” reminds us that when we are united, we can make change happen.