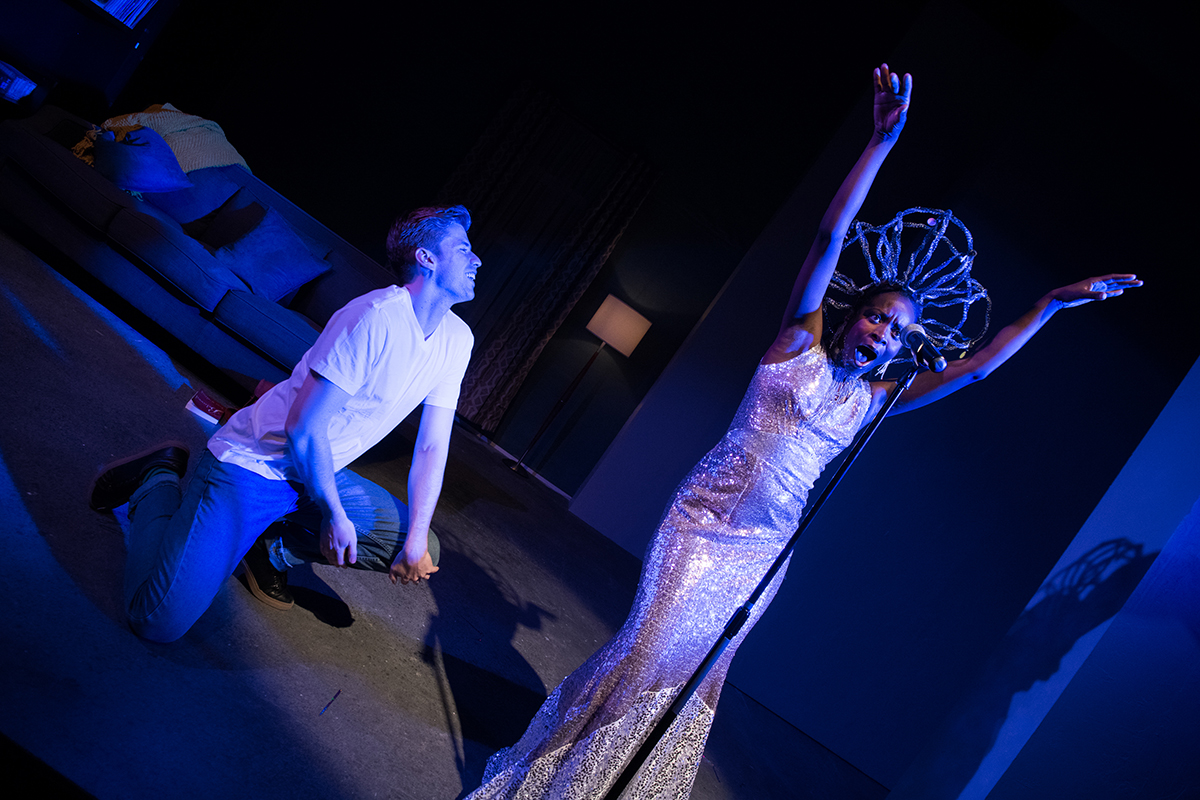 “White” explores how white men–including gay white men–have consistently engaged in stereotyping Black women. Case in point: Imitators regularly profit by stealing the mannerisms of Black women by “acting Black.” It’s so typical that we even have a name for it: Culture Vultures.

As a result, Gus hires serious Black actress Vanessa (also versatile Santoya Fields) to pass herself off as the painter of his works. Their struggle over the creation of a persona called Balkonaè is awkward, stressful, and ignorant.

Vanessa begins by introducing herself politely, but Gus wants another kind of Black woman. His stand-in should speak outrageously, not professionally. Vanessa questions Gus: “Have you ever met a real Black woman?”

Playwright James Ijames experiments with the codes that Black women must navigate in a world that tries to reject them every day. Vanessa has had to learn to speak and act “White” just to be heard. The need to switch “codes” for each encounter invades every young Black woman’s life.

When we first meet Vanessa, she is wearing her hair in a permed bun. As the “new” artist Balkonaè emerges, she wears an impressive Afro halo. But the natural Afro-do is banned in work settings, as unprofessional and unruly. Gus’s “inner Black woman,” Balkonaè, wears a red velvet dress with a wild, alternative look.

Ijames offers familiar insights in a world where white skin has been the standard of beauty. Vanessa learns to accept and love her ass and tummy. Vanessa’s transformation into Balkonaè brings out sass and honesty that Vanessa would never be allowed in real life.

Even though Vanessa/Balkonaè does have the final monologue, we still hear and see Gus’s voice through her. Gus constantly reminds us that “he has made her.” And in many ways he’s right: U.S. White Culture has made Vanessa–by asserting that “White is Right.”

Although we get to witness Vanessa’s inner struggle, how long before she has to revert to the old, ingrained behavior for her survival as an actor and as a Black woman?