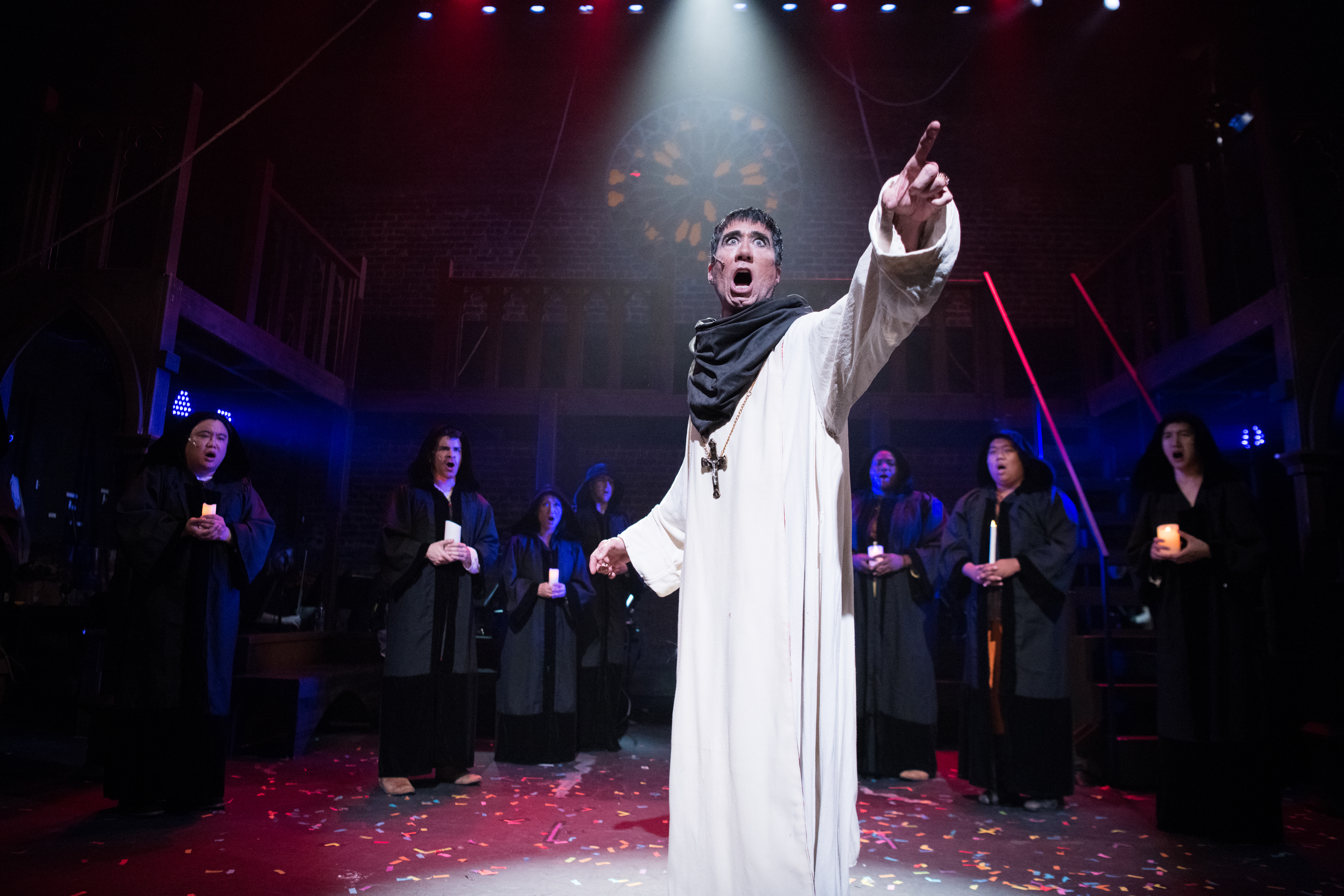 Director and Choreographer Matthew McCoy brings thrills to Victor Hugo’s gothic tale The Hunchback of Notre of Dame in this vibrant adaptation of the Disney movie. If you see one musical this year, see “Hunchback” by Bay Area Musicals. McCoy’s production presents an hypnotic kaleidoscope of colors, dances, and angelic choruses—leaving us singing and tearful.

It’s 1482, Paris, and the chimes of Notre Dame usher us into the solitary world of deformed Quasimodo, brilliantly played by the electric Alex Rodriguez. Quasimodo is befriended by three singing stone gargoyles (dynamic trio Loreigna Sinclair, Juan Castro, and Benjamin Nguyen). He is ordered around by hypocritical, hateful Archdeacon Claude Frollo—superbly embodied by the spectacular Clay David. Caged in the cathedral, Quasimodo sees a lonely view of medieval Paris.

When he escapes the magnificent mahogany pillars and stained glass, Quasimodo is treated cruelly by wonderfully colorful, rowdy gypsies. His physical flaws provoke their hatred and harassment. In our backsliding time, we see the marginalization of minorities every day on line, in the news. It’s Muslims one day and Mexicans another.  Quasimodo stands for all generous minds maltreated and abused.

Though outsiders themselves, the gypsies bring vivid life to a Paris weighed down by medieval Catholicism, through their pick-pocketing fiascos and hilarious brothels. The bold twirling costumes of the gypsy women enchant both men and women.  Costume Designer Brooke Jennings’ stunning designs shine, especially Esmeralda’s glittering sapphire dress with its gold trim. For contrast, she gives us Quasimodo’s tattered brown shirt, scaly hump, and scarred face.

As Frollo, Clay David’s white robes and bejeweled hands enchant, though he’s a bona-fide hater. His Frollo brilliantly embodies toxic masculinity. And he gets us to sympathize with Frollo’s inner struggle.

“Hunchback of Notre of Dame” combines an outstanding orchestra and phenomenal actors with impressive vocal ranges. It feels like a full symphony. Quasimodo and Frollo soar to the heights with “Out There” and “Hellfire.” They capture longing and loneliness with a strong ominous tenor, keeping me on the edge of my seat.

Imposing King of the Gypsies, Clopin Trouillefou (magnificent Braden Noel Thomas), presents a  bigger than life persona. Thomas keeps us laughing, as he rocks in his yellow pinstripe jumpsuit. Clopin entrances with a voice so powerful, it takes over the hall.

“Hunchback of Notre Dame” speaks volumes about fearing the “Other.” Songs like “Sanctuary” remind us of the importance of safe places in a world ruled by power and ridicule. McCoy unravels a timely tale which captures the essence of ostracization, criminalization, and overzealous piety.  A joy to behold! “Hunchback of Notre Dame” is based on Victor Hugo’s novel, directed by Matthew McCoy, music by Alan Menken, lyrics by Stephen Schwartz and Peter Parnell, songs from the Disney film, by Bay Area Musicals, at the Victoria Theatre, San Francisco, through Sunday, August 5, 2018. Info: bamsf.org