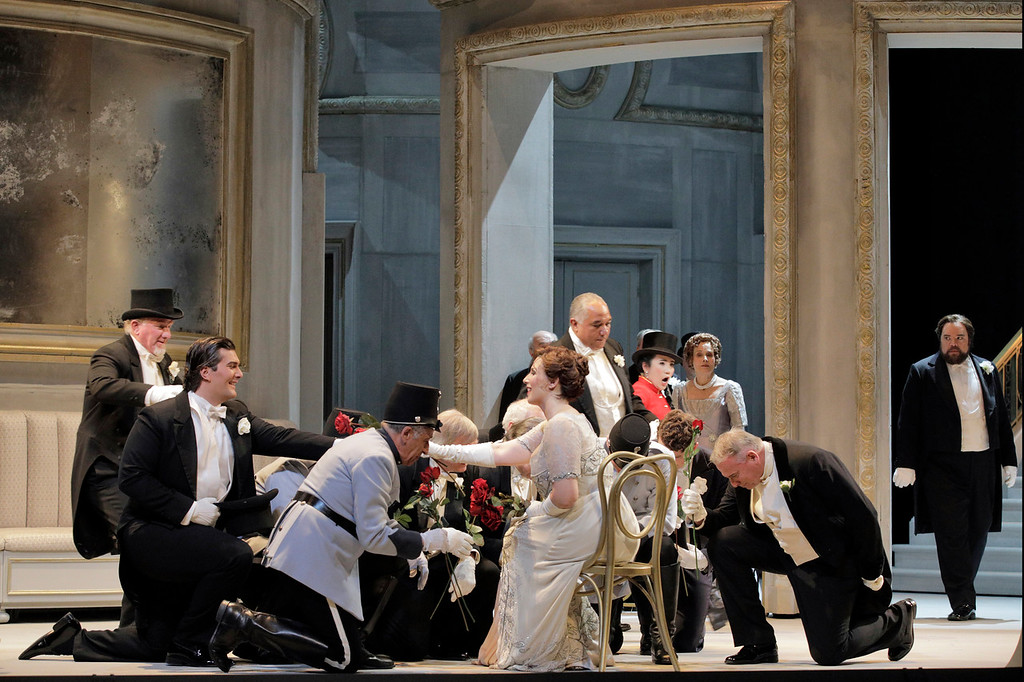 Richard Strauss’s 1933 “Arabella” was last seen in San Francisco in 1998. The long delay between performances likely stems from a frequently ludicrous libretto, which needs a light but subtle touch and calls for lead singers who are also deft actors.

The plot centers on a poor but aristocratic family whose hopes lie in marrying the beautiful Arabella (soprano Ellie Dehn) to a rich suitor. Her younger sister, Zdenka (Heidi Stober), still dresses like a boy, which is fine with her parents (baritone Richard Paul Fink and mezzo-soprano Michaela Martens), who can afford to marry off only one of their daughters.

Pretending to be “Zdenko,” the girl has befriended Matteo (tenor Daniel Johansson), a young officer madly in love with Arabella. He’s just one of many who adore Arabella, who is intent on marrying “Aber der Richtige”—the one who’s right for me—a theme that leads to the sisters’ beautiful duet. (Unfortunately, in his U.S. debut, conductor Marc Albrecht leads the orchestra in a performance that could impress in a symphony hall but competes with the singers more often than supporting them.)

Zdenka, who (of course) loves the overwrought Matteo, tells him that Arabella still cares and brings him letters purportedly from her sister. Meanwhile, Arabella has become attracted to a stranger who turns out to have fallen in love with her picture (long story). When she agrees to marry the wealthy Mandryka (baritone Brian Mulligan), Zdenka slips the grieving Matteo a key to her sister’s room, where she plans to meet him herself. Unfortunately, Mandryka overhears, and yes, complications ensue.

Happily, the singers in this 2012 co-production (from Santa Fe Opera, Minnesota Opera, and the Canadian Opera Company) are up to the task of turning often absurd characters into believable beings. Dehn has the beauty and self-assured bearing of a woman long accustomed to admiration. Arabella’s three young suitors look appropriately shallow next to Mulligan’s compelling Mandryka.

Johansson is a fine, impassioned tenor and is so handsome, you can understand why Matteo causes Zdenka to act so foolishly. An excellent actress and lovely soprano, Stober makes the story’s most absurd elements work as well as they can. Fink and Martens supply comic relief as the parents, even as they struggle with the financial calamity caused by the father’s compulsive card playing. Fink is particularly adept at that balancing act, portraying a bantam cock of a man who rises (briefly) to the occasion when he thinks his younger daughter has been ruined.

Zdenka’s deception of Matteo is the oddest aspect of a frothy yet perplexing libretto: Could a man remain ignorant about which woman he was sleeping with? Would a bourgeois girl in staid 1910 Vienna so lightly throw away her own marriage prospects? Would her parents, and Matteo, really be so quick to accept a wedding as the solution?

Then again, this is opera, not kitchen-sink realism, and it says something that some of us come away thinking about the libretto almost as much as the music.