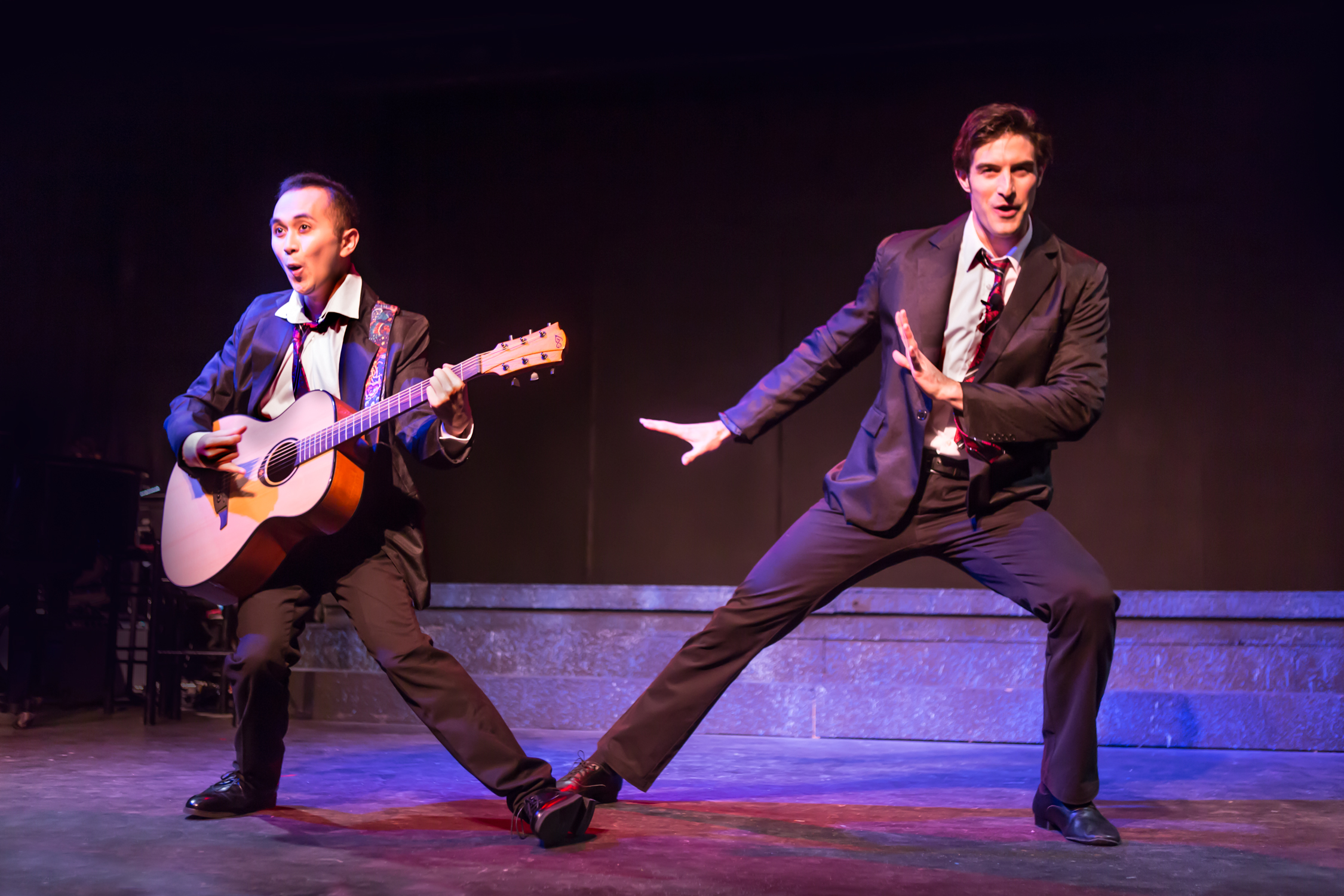 Peter Allen Inspires Tears, Joy from Down Under

Director John Fisher has done it again. He has revived the most fabulous gay musical, telling the story of famous lounge singer, dancer, and songwriter Peter Allen. Even though I didn’t know the fabulous story of Peter, Judy, Greg, and Liza, the music and heartfelt performances impart warmth and understanding to 40 years of LGBTQ struggle and triumph.

Little Peter Allen as a young boy (brilliant, adorable Cameron Zener) sings and dances his way into our hearts when he insists to his mom and dad in a little rural town in outback Australia that he must have music lessons.

In an opening scene, older Peter (talented heartthrob Justin Genna) dances with his younger self, reliving the troubled first years with his doting mom (stellar Larissa Kelloway) and his abusive alcoholic father (witty Kim Larsen). The duo, older and younger, perform a charming tap-dance that warms our hearts from the beginning. Tall, sexy Justin Genna knows his way around the dance floor, executing poetic moves expertly.

When Judy Garland (powerful Leandra Ramm) spots Peter performing in an Australian lounge, she snaps him up and takes him back to New York to be her opener. We are transported by the magic of two formidable personalities clashing onstage—a 50s historical moment. Bubbly John-Charles Quimpo plays Allen’s stage partner Mark Herron with a delightful energy.

When Judy and Peter compete vocally, we feel the love and support flowing between the older and younger singers. Leandra Ramm looks so much like Judy Garland and belts her songs with such authority that she gives us a chill. Once Peter Allen meets Judy’s teenage daughter Liza Minelli (touching Carol Ann Walker) all bets are off.

“The Boy from Oz” spotlights Peter Allen’s own unique style of music. When he sings “If You Were Wondering” with his boyfriend, charming Greg Connell (melodic Justin Lopez), they capture the romantic moment, sweetly. Peter and Greg develop into a marvelous pair of lovers in the early years of Gay Liberation.

Paired with Peter Allen’s moving lyrics, the magnetic chemistry among the ensemble roots the music in our hearts. I was particularly struck by “When I Get My Name in Lights”; “Quiet Please, There’s a Lady On Stage”; “Not the Boy Next Door”; and “Love Don’t Need a Reason.”

Larissa Kelloway stops the show with Marion’s solo “Don’t Cry Out Loud.” As she advises her little boy, she epitomizes the Puritan repression that has stifled so many lives. Justin Genna lovingly portrays Peter Allen rising to the moment, transcending the tragedy of AIDS.

In a grand finale the whole cast joins him in Allen’s signature song “I Go to Rio,” all dressed in Allen’s classic Hawaiian shirts, shaking their marimbas. A joy to behold.