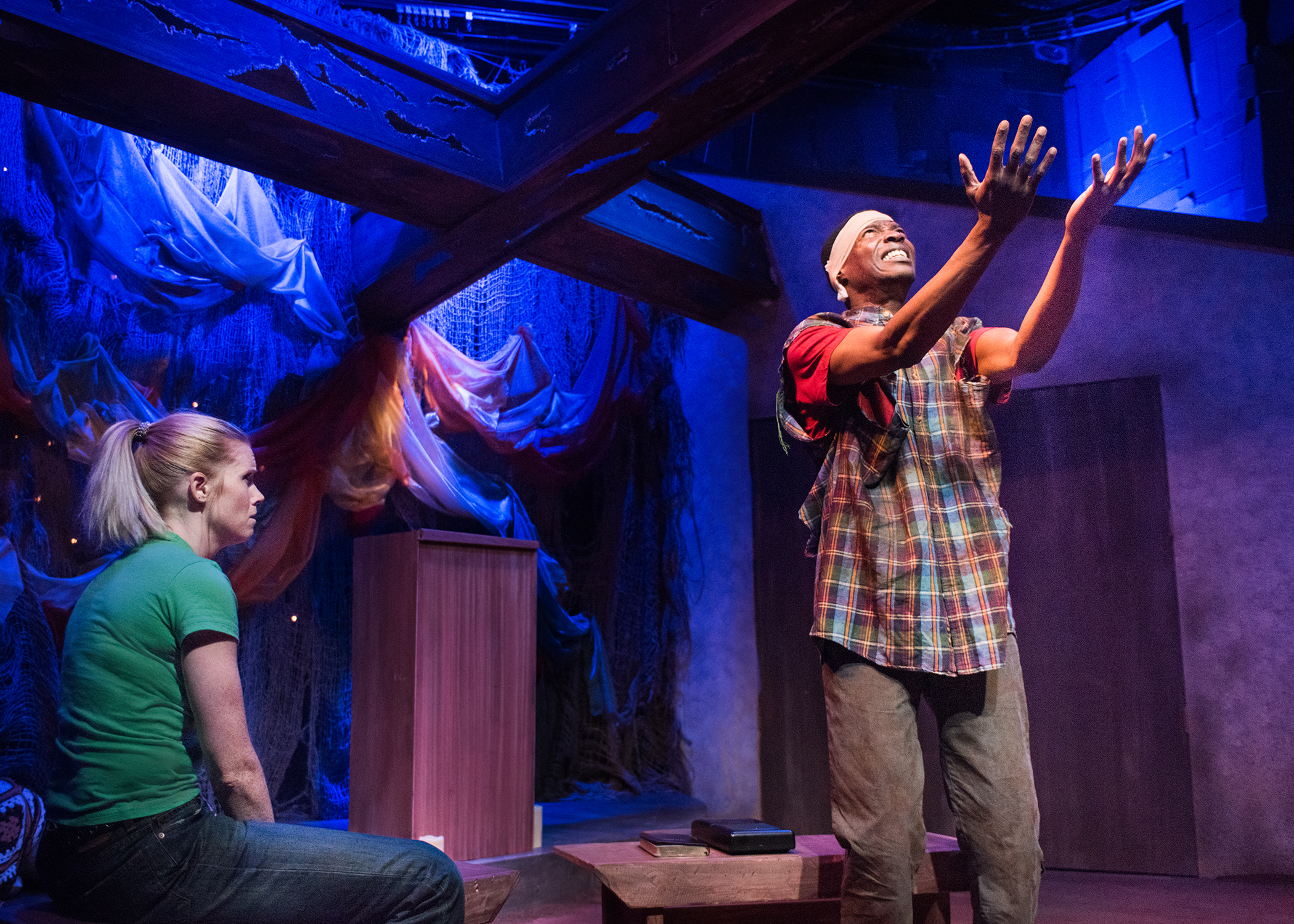 Who has the power to absolve us? Does God or those we have sinned against? The intense dialogue of “Cardboard Piano” demands we wrestle with sin and redemption. How much violence makes us irredeemable?

The show begins with the secret wedding of Chris (sharp Megan Timpane) and Adiel (warm-hearted Gabriella Momah). Chris, the daughter of the U.S. missionary in their village, is in love with Adiel, her Ugandan girlfriend. Alone in the sanctuary of their church, Chris and Adiel record their illegal wedding. If anyone finds out the two are lesbians, they surely will be killed.

Designer Devin Kasper gives us a spectacular stage setting, ideal for “Cardboard Piano.” The little church is hung with flowers and ribbons as they hide out there for sanctuary. Two long and imposing wooden beams hang from the theater rafters, forming a menacing cross. The giant wooden cross, made from aged wood, is riddled with worm holes and cracks that glow from within with hellish or hopeful light at moments of crisis. The hanging heavy cross serves as a perfect symbol for the personal and political questions that swirl through the charming church below.

A bleeding, wounded child soldier, a thirteen-year-old boy named Pika (brilliant Howard Johnson) bursts in, pursued by gunfire. Confused, Pika believes himself beyond forgiveness for his horrible civil war crimes in Uganda. The two frightened young women care for him–in a swirl of fear, sympathy, and love–setting the scene for many more heartbreaking twists.

The fourth cast member, a pursuing Soldier (magnetic Dane Troy) makes up the rest of the versatile and talented cast. In writer Hansol Jung’s world, faith in God offers these soldiers a path to redemption. Although Christianity has a unique hold on each of them, the women are not so quick to forgive. A gunshot and a crisis bring a shocking end to Act One.

Act Two brings all four actors back years later in new roles, still seeking redemption. Hansol Jung has provided a truly moving Act Two–proving that the best plays have a second act where reversals, surprises, and transformations can still happen. Thanks to NCTC for bringing back the intermission for a shrewdly structured, smart two-act play.

The actual cardboard piano, made by a father for his demanding daughter, poetically shows that broken hopes can perhaps be fixed. When all four actors fill the room with gospel song at the start and finish of the play, they are transformed women and men. “Cardboard Piano” offers faith-filled moments you won’t find anywhere else–creating a lyrical and rooted understanding.