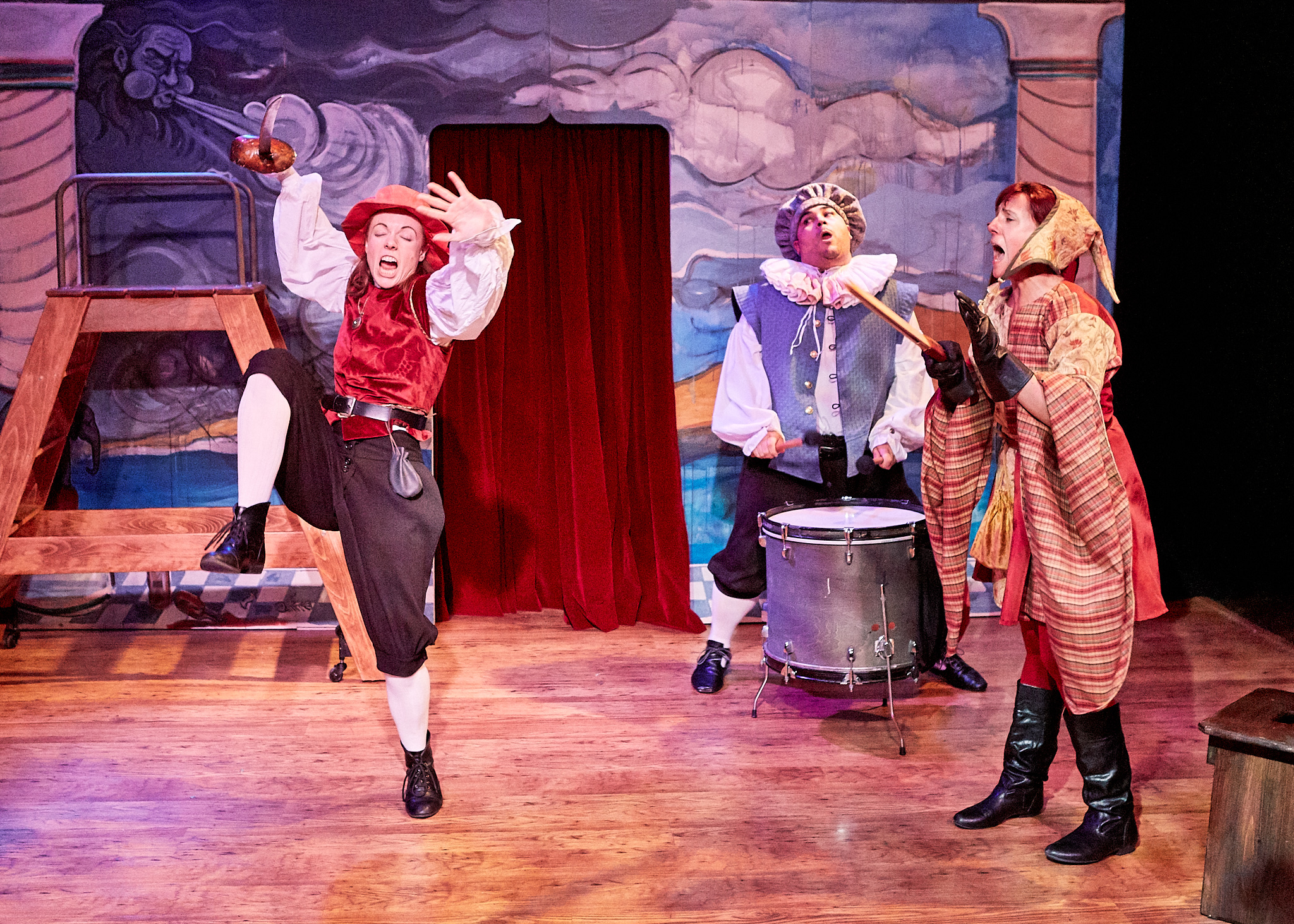 “Twelfth Night” has all the convoluted plot lines and fanciful, farcical characters we expect in a Shakespeare comedy.  And yet, Director Audrey Rumsby has managed to pull it off with only six actors at the Arabian Shakespeare Festival.  Each performer impeccably plays two or three roles, with superb results.

The pairings of actors to two or more roles is a fascinating showcase of human behavior. The pairings range from absurd and honorable to stoic and silly, offering us brilliant new insights in Shakespeare’s constellations of characters.

I love this cast of six, five women and one man, playing eleven roles. Kate Rose Reynolds is marvelous as the shipwrecked, melancholy, and romantic Viola, pretending to be the dutiful pageboy Cesario. Her one role of Viola/Caesario contains two personalities, and she carries it off masterfully. She/he becomes the uncomfortable target of Olivia’s affections; while lovesick Viola, herself, longs for her master Orsino.

Duke Orsino (talented John R. Lewis) is mooning over his unrequited love for Countess Olivia (commanding Livia Gomes Demarchi), as he comically mourns, “If music be the food of love, play on….”  But Olivia is sunk in deep mourning for her recently deceased brother and father. When Orsino enlists his secretly cross-dressed, attractive pageboy to woo Olivia, we sense that comic chaos will ensue.

Versatile John R. Lewis also does an excellent job of playing jovial drunken Sir Toby Belch, just the opposite of his pining, philosophical Orsino. As Toby, he bangs the drums loudly, enhancing the delightful connections between his two roles—decadent Orsino and dipsy Toby.

Livia Gomes Demarchi excels as both the somber Countess Olivia and the duplicitous Maria, her servant.  Demarchi’s intriguing double-casting shows the Countess becoming her own servant. That pairing vividly highlights the obstacles for aristocrat and servant, an intriguing class study.

Rebecca Pingree is remarkable as Feste—the jester with silly hat, riddles, and songs. Pingree is equally capable in her roles as the old, rickety priest and working sea captain. Pingree plays the ukulele and sings Shakespeare’s lilting songs with style and wit.

Rumsby’s vision thrives with her uniquely talented cast of six.  The actors carry it off with hilarity and fun, demonstrating remarkable talents. A magnificent, endearing, and enjoyable “Twelfth Night” by the Arabian Shakespeare Festival.