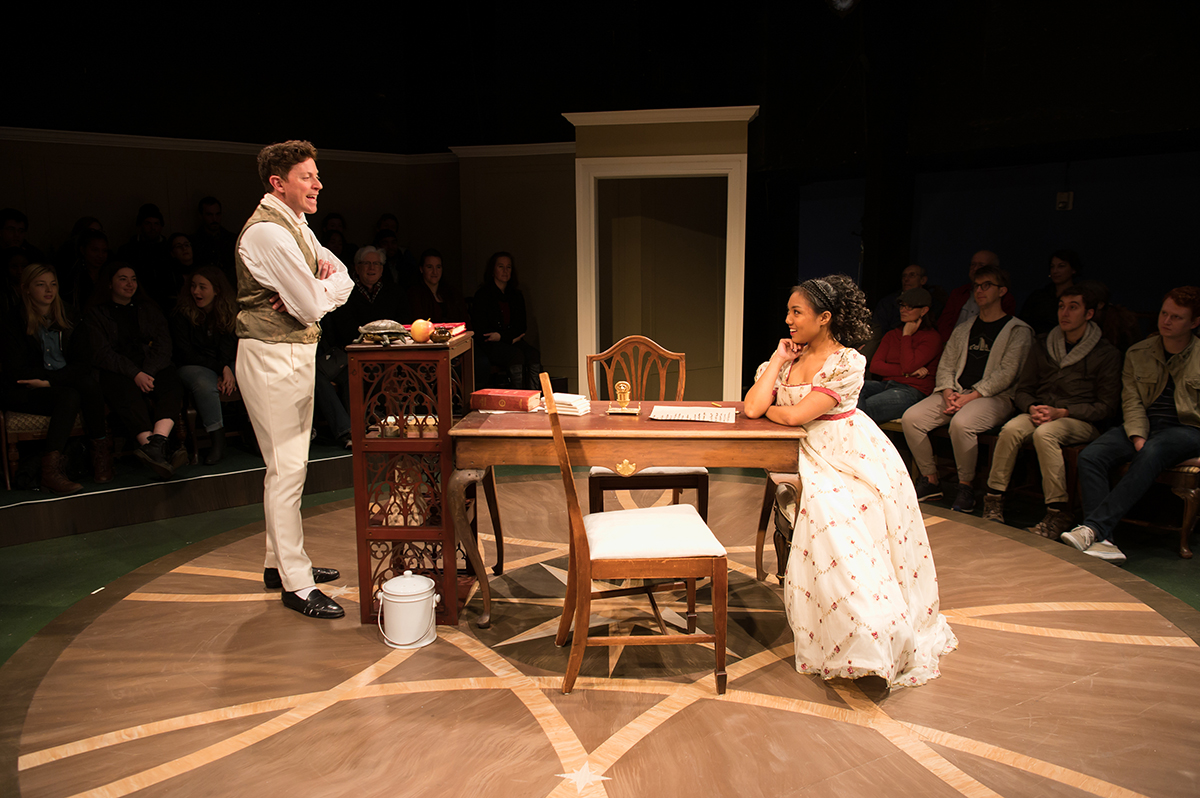 “When you stir your rice pudding, Septimus,” says Thomasina, “the spoonful of jam spreads itself round making red trails like the picture of a meteor in my astronomical atlas. But if you stir backwards, the jam will not come together again…. Do you think this is odd?”

The past is unrecoverable. The future is determined, mathematical. In the meanwhile, we would all do well to find a partner and dance. And Tom Stoppard’s much celebrated 1993 play, “Arcadia,” edges toward a cypher.

It is 1809, and the precocious 13-year-old Thomasina Coverly asks her tutor, “Septimus, what is carnal embrace?” “Caro, carnis,” he breaks out his Latin, setting off a game of free word association in Stoppard’s wickedly clever opening. Septimus Hodge (Max Forman-Mullin) extemporizes from a healthy distance. Thomasina (Amanda Ramos) plays the ingenue, so far as to belie her mathematical genius. Though nine years his junior, she is more than his intellectual match. Somehow, there ought to be fireworks.

The scene shifts from Romantic England to the present day, two eras sharing the setting of an English country estate. Across a gap of two hundred years, a table and chairs, a turtle, an apple, and a stack of books knit the two worlds together. Designer Deanna Zibello sets us in the solarium of the Sidley Park manor, indicated by the framing of a high windowed dome, a deft touch. The lightly sketched scenes leave the expanse of the theater to be filled with Stoppard’s language.

In the present day, English Professor Bernard Nightingale (Aaron Murphy), arrives at Sidley Park to look into hints of a blockbuster discovery about Lord Byron, the British Romantic poet. Quickly he convinces himself that, in 1809, Byron killed fellow poet Ezra Chater (Justin Dupius) in a duel at Sidley Park.

When we can keep up with them, the characters dazzle with their wit. They recite poetry. They ponder, to nihilistic ends, Newtonian determinism, the new science of thermodynamics, and the mathematics of grouse populations, derived from records of animals on the estate that have been shot. They fuck, they cheat, they plan to duel. (The action stays wholly off stage.) They cravenly catch a cab to the station, fleeing the duel.

Our present-day intellectuals seek romance in the filaments of Sidley Park’s past, only to end up lost in false histories of their own conceit. They fail spectacularly to connect with the warm, interested, brilliant humans in their midst.

Odd or not, Thomasina has nailed a burning physical question, still debated by philosophers and physicists. Why, when Newton’s laws function as well backwards as forwards, can the universe never turn back on itself?

Repeatedly, voices of women in the play drown in the self-regard of men. When Bernard the professor seeks the help of writer Hanna Jarvis (blissfully grounded Jessma Evans), he mansplains away her incisive objections. Hanna gamely forgives Bernard’s derision, time and again, until finally she loses interest.

In an empty argument pitting poetry against science, Bernard bullies the soft-spoken mathematical biologist Valentine Coverly (Gabriel Christian). Valentine invariably stumbles when trying to explain his work with the grouse. He marches in and out, cursing plaintively under his breath. Christian delightfully captures the scientist’s despair of ever finding sense in his mathematics.

In the audience, I felt a distinct sadness watching the fracturing of these incipient relationships. Time presses onward and will not allow these characters a second chance. Bernard and Septimus, even Thomasina, Hanna, and Valentine want for a bit of softness and joy in their intellectual jousts.

It is telling that some of the best laughs come during intermission, when the bro-ish Captain Brice (Adam Niemann) and spindly Ezra Chater, a drunken marionette, regale us while raffling off a tote-bag and a tiny tortoise eraser. Half in, half out of character, their plummy English accents askew, they banter with an ease elsewhere missed.

Banner Photo: Max Forman-Mullin (Septimus) and Amanda Ramos (Thomasina), in the round.