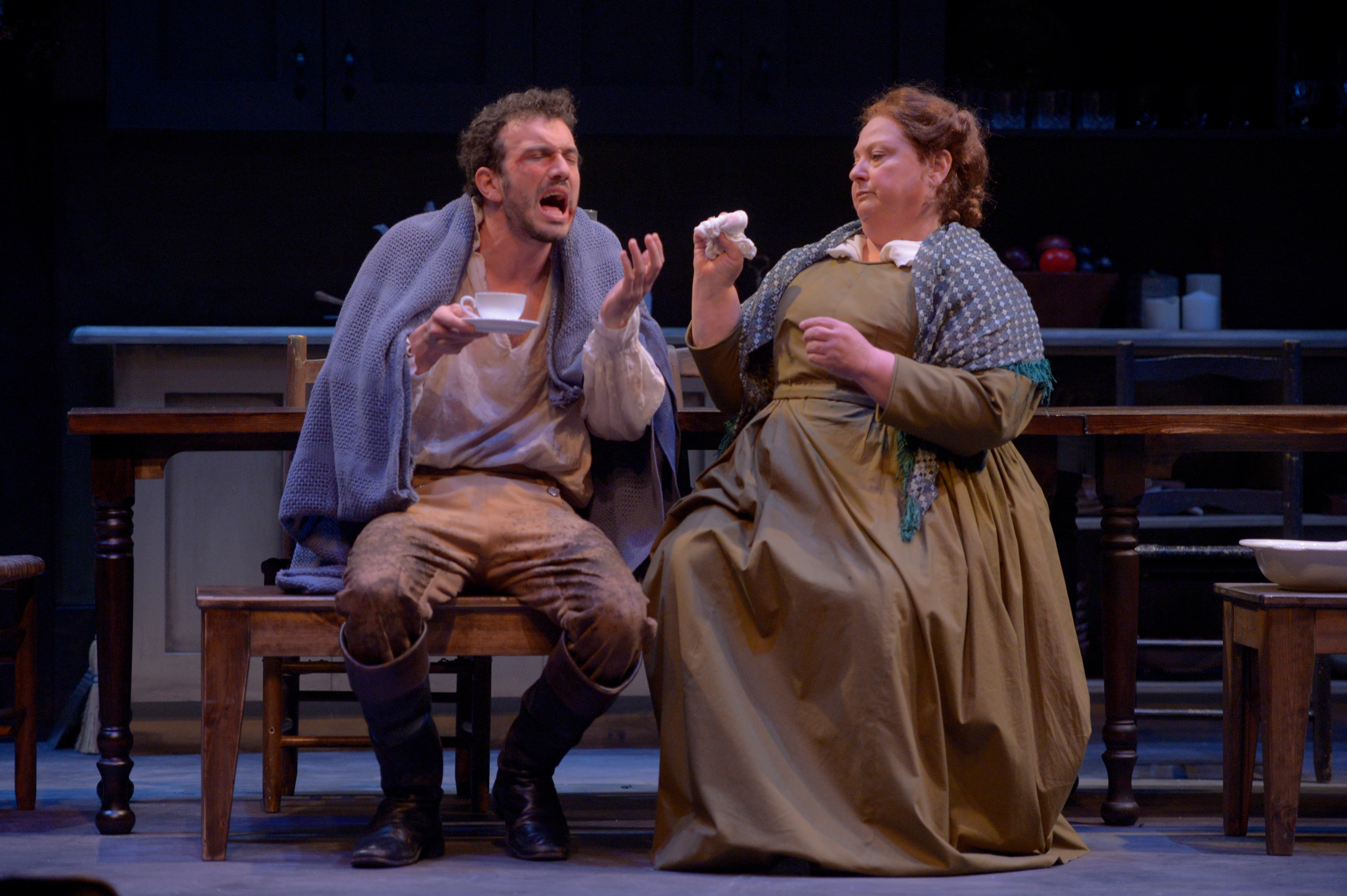 In this sequel to Pride and Prejudice, the clever playwrights take us downstairs into the vast basement kitchen underneath a great English manor. The rich people upstairs keep sneaking down the heavy duty wooden staircase to get some of the housekeeper’s Christmas cookies.

But wicked, witty George Wickham (delightful Kenny Toll) bursts into the kitchen and the whole household goes into an uproar. George argues eloquently for the rights of the poor and rejected in Jane Austen’s England. In his stirring speech, he asserts a poor man’s right to an education, brilliantly.

Each actor does a superb job. The worldy, wise housekeeper, Mrs. Reynolds (commanding Jenny Brick), the General of the house, runs the place, even though she is a servant. Mrs. Reynolds rules the roost magnificently, cooking, baking, and preparing sweet treats for the spoiled elite upstairs. In 1815, a few years after the American and the French Revolutions, Mrs. Reynolds runs the Darcy household like a powerful colonial general.

Downstairs, we find eager Brian (elegant August Browning) in his green and beige footman’s uniform, striding the kitchen, loyally tending the needs of the supercilious upper class. In his charming, shy way, Brian engages and serves both servants and owners. But he is constantly thwarted by the unfair rules of the patriarchy, which are stacked against this bright young inventor of cookie-cutters and other good ideas. Browning’s Brian keeps on trying, with great and touching comic results.

The new servant, feisty Cassie (talented Neiry Rojo), turns out to be an independent young woman who will not take any crap from men, or the ruling class. Cassie wants “a life of her own.” Brian and Cassie reveal  the new man and the new woman. Their time is coming and every comic confrontation with the Darcy’s brings us another laugh closer to revolution.

When people compliment her on her baking, Mrs. Reynolds protests, saying, “Stop! Praise slows me down.” She is smarter than her masters. Motherly Mrs. Reynolds knows her bosses inside and out because downstairs’ lives depend on her wisdom.

Lauren Gunderson and Margot Melcon have created a Christmas play that illuminates the conflict between The One Percent and their servants, the rest of us. “The Wickhams” serves up a hilarious, top flight Christmas treat. The superb set, the consummate acting and direction, the brilliant costumes, and the emotional  speeches–all call for a second visit to Mrs. Reynolds’ kitchen. There’s a revolution brewing down there.