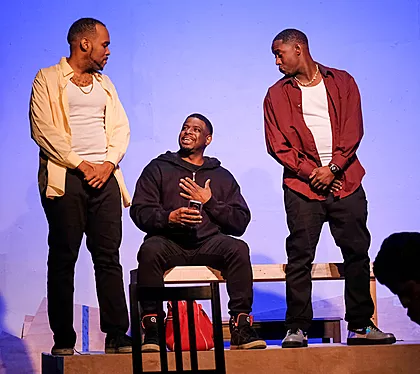 Feelings of sadness and anger swell up when a teenager is killed for his shoes. A gunshot ends an intense game of basketball between two young men. The unnamed murderer takes the deceased’s shoes: a pair of vibrant Sky 16’s, the hottest new basketball shoes. “Honky” explores the teen’s absurd and unacceptable death.

In Role Players Ensemble’s “Honky,” a CEO, an advertising executive, a shoe designer, a psychiatrist, and a bride-to-be are united by the murder. It reminds us of James Anthony Smith, who was murdered for his Jordan’s, and so many horrors in the news.

Davis Tallison, CEO of Sky Shoe Company, (persuasive Micah Watterson) displays the arrogance and insensitivity of a privileged person. Tallison meets with Sky’s designer, Thomas Hodge (multi-faceted Khary Moye) to discuss future ads. Although the scene begins with calm, Tallison and Hodge get into a shouting match. Hodge lies that the deceased is his cousin and Tallison confesses that his wife committed suicide. Both men reflect their guilt, real and imagined.

On the city subway, Peter chats with Kid 1 (robust Terrance Smith) and Kid 2 (subtle Michael L. Grayson II) who are dressed in “preppy” attire. Peter is shocked when they try to rob him. Earlier, Tallison confronted Kid 1 and Kid 2, when they were dressed “street,” in wife-beaters and saggy jeans with their boxers showing. Tallison thinks they are going to hurt him, but they just walk away frustrated when he tries to bribe them with free shoes. Tallison wrongly assumes that clothes make the man.

Even Dr. Hodge is ambushed: The ghost of Abe Lincoln (surprising Craig Eychner) pops up in her office, with his smooth talk and a confident gait. Lincoln imparts wisdom to the good doctor, but he leaves unsatisfied because he cannot truly liberate her.

Meanwhile, the ghost of Frederick Douglass suprises a drowsy Tallison in his kitchen. In his thunderous voice, Douglass’ tirades, laced with profanities, bring down the house. Douglass inspires Tallison to change his racist ways and become a better person.

Andie Chastain, Peter’s fiancée, (enthusiastic Emily M. Keyishian), a courageous and reckless woman, drops painful truths, inconveniently: “Why can Black people say that, but I can’t?” or, “I’m part Jewish; I can say that.” Andie questions our basic social conventions.

A kid dying over shoes is tragic; a grown-man getting cussed out by a ghost is hilarious. “Honky” brings us insight and laughs—a great combination, with fine acting, direction, and joy.