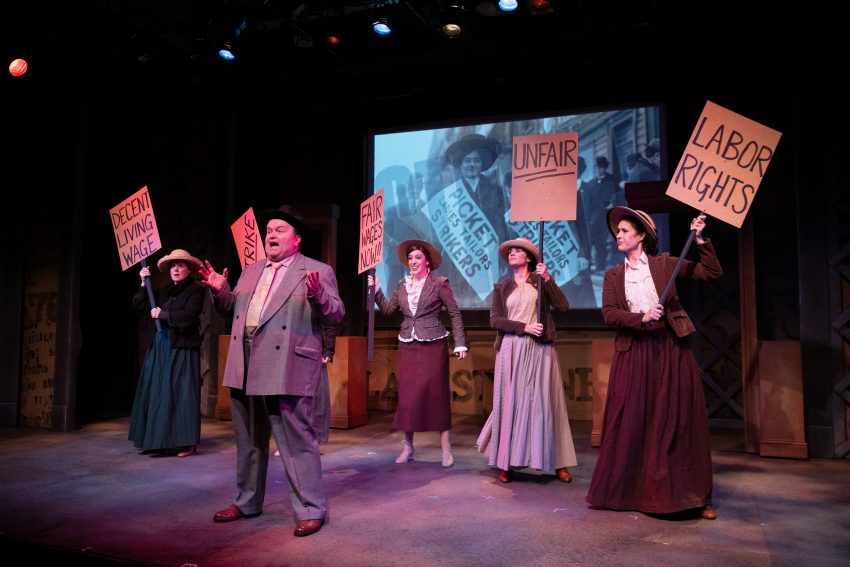 Fiorello H. LaGuardia, 99th Mayor of New York, known as “the little flower,” was no shrinking violet. A tireless, crusading lawyer and politician, LaGuardia represented the poor, immigrant, non-English speaking people of New York from the rough-and-tumble 20s till after WWII. 42nd Street Moon’s uplifting version of the 1960 musical “Fiorello!” brings the decade-long Mayor to life in an inspiring, enjoyable show.

“Fiorello!” tells a historical-political story that leaves me longing for a U.S. leader who speaks multiple languages and takes pride in immigrants!  Today, our so-called leader can barely structure a sentence in English and is quick to scorn almost everyone “foreign.”

We see LaGuardia as an upstart attorney, Congressman, and mayoral candidate, but the musical examines his personal life, too. We love the folks who cheer him along and fear the Tammany Hall machine that plots his defeat.

As Fiorello LaGuardia, Colin Thompson does a masterful job playing the fast-talking, pugnacious, whirlwind politician. Thompson sports Fiorello’s baggy double-breasted suit and broad-brimmed hat, the essence of the beloved Mayor. Helping those less fortunate is hard work. LaGuardia’s assistant attorneys, Neal (enthusiastic Sean Fenton) and Morris (funny Matt Hammons) admit it while singing, “On the Side of the Angels.”

And LaGuardia’s smart assistant Marie (Katrina Lauren McGraw) has a crush on her crusading boss. But Garment Workers Union organizer Thea (Amanda Johnson) wins Fiorello’s heart, sharing her feelings in the touching ballad, “When Did I fall in Love?”

The lively Ensemble delights us with the rousing campaign march, “The Name’s LaGuardia,” sung in Italian and Yiddish (with words projected in English). They join political operative Ben Marino (Chris Vettel) in exposing the underside of 14th Ward politics, as we sway to “Politics and Poker” in waltz time. Later, “Little Tin Box” makes great fun and dance about corruption, patronage, and mysteriously bloated bank accounts.

Director Karen Altree Piemme steers the show smoothly, over distracting subplots in a complex story. As worker Dora, Marisa Cozart delights with “I Love a Cop.” She points out the irony of falling in love with the “authority” who arrested her labor organizing friend, Thea.

Together, Music Director Daniel Thomas, Choreographer Jayne Zaban, and Costume Designer Merissa Mann create many memorable scenes. We delight in an ethereal garden party, where Thea sings “‘Til Tomorrow,” as LaGuardia heads off to WWI.

“Fiorello!” reminds us of a great man and the good he did. Will we ever again see LaGuardia’s honesty and idealism gain a toehold in politics? I hope so. Just look at the fresh spate of women and minority representatives elected to Congress last year, potential champions of the under-represented—more “little flowers,” needing room to grow. “Fiorello!” delivers!