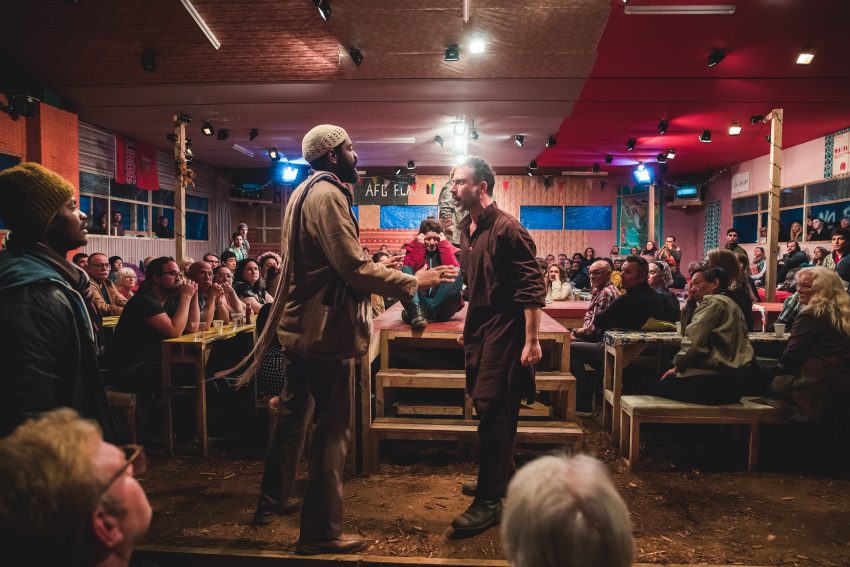 Walking into the totally transformed Curran theater, we are struck by the musty smell of plywood and sawdust. There’s no stage, just low ceilings and long picnic tables that serve as thrust stages. And the smell of delicious food cooking in the slapdash kitchen. Directors Stephen Daldry and Justin Martin do an amazing job of re-creating the immigrant encampment in Calais, France where thousands waited for two years.

In the cramped space, everyone wedges in tightly on benches or pillows on platforms.  Others sit behind windows cut out of plywood. Some sit in the mezzanine, looking down on us in the café space, below. Seeing them unnerves me as I grasp that we are part of the show. All the refugees in “The Jungle” are trying to get to England to find work. Some die jumping for trains going into the English Channel Tunnel.

Exceptional actor Moe Bar-El offers us tea in a paper cup; he says it’s a special Afghani chai recipe. I know he’s an actor, but already I am leaving The Curran for Calais, France, where thousands of Middle Eastern and African immigrants were huddled for years in a giant tent camp. Women, children, men, young, old are fleeing from Syria, Sudan, Afghanistan, Iran, Iraq, Eritrea. They call it “The Jungle.”

Calais was home to a sprawling refugee camp of 6,500 people over two years. Human Rights Watch says it’s “Like Living in Hell.” The camp is a frequent target for xenophobic attacks, and constant brutality by French police. But the immigrants have built great honesty and caring into their tent city, which mirrors thousands of harrowing stories.

Stories and lives explode on the long tables that serve as stages in the Café. As Salar, Turner delivers a gripping performance, as builds the café around his Afghan Flag. He’s a haunted man who later takes care of a renegade boy. Add to this volatile mix, two overzealous, funny British volunteers who are trying to build domes to house refugees.

As the actors come out, they run and leap so close that I must look away. Watch for the great acrobatics by Yasin Moradi, a martial artist from Iran. And follow Mohamed Sarrar, a musician from Sudan, who plays a charismatic camp leader. Both are actual refugees who lived under the Good Chance dome: they capture our hearts. We are plunged into great terror and great sympathy.

Large metal bowls fly over my head, while across the room a man nearly rides a bike into the audience. It’s like a show choreographed by the Harlem Globetrotters.  As the chaos swirls around us, we realize that confusion, struggle, and love define the Jungle encampment.

The cast is enormous, and everyone brings such zeal to their roles—a 17-year-old boy played by hypnotic John Pfumojena, shows his scars and recounts the shocking cruelties of his journey. An Eritrean woman, impressive  Nahel Tzegai, despondently asks for asylum in France, instead of trying to reach Britain.

The Jungle triumphs with magnificent timing, intimate staging, and superbly honest actors. Above all, this unique experience makes us all witnesses to their powerful, true stories. Enter “The Jungle” and emerge with a new view of the world. A once in a lifetime experience of change and hope.

“The Jungle” by Joe Murphy & Joe Robertson, directed by Stephen Daldry & Justin Martin, at The Curran, through Sunday, May 19, 2019. Info: sfcurran.com