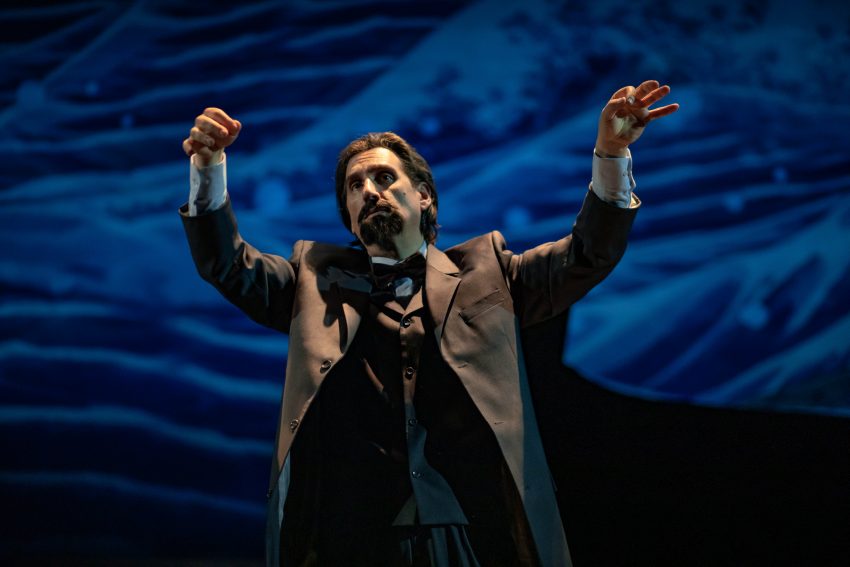 The setting is Debussy’s Paris in 1900, and pianist Hershey Felder is offering us a blueprint for the artistic life—full of love, romance, and inspiration.

The stage is set with two little Parisian bridges, with Hershey Felder’s magnificent black concert grand between them. This design allows the pianist to stroll the bridges and parks of Paris, walking in the steps of composer Claude Debussy, as he dramatizes the French composer’s life.

Hershey Felder has played the lives and music of great composers, including Beethoven, Chopin, and Irving Berlin. In costume, he becomes the composer, a solo performance—with piano.

Behind him, we see magnificent projections of Paris, in lovely, living sketches. The pictures change from Notre Dame de Paris (now sadly smoldering), to the River Seine, to the Luxembourg Gardens. Paris inspires both Debussy, the composer, and Felder, the virtuoso pianist/actor.

Debussy struggled as a piano teacher and a composer in order to break down traditional music. He felt himself in competition with the great German composers and wanted to make a truly French music, based on Nature.

As Debussy, Felder shows us the poor, rural boy who came to Paris to study music, and won pupils in the houses of the rich. Parisian women were charmed by his seriousness and his music. There’s no shortage of love lost and love found in Debussy’s life.

Although critics call Debussy’s music “impressionist,” he rejects the term. Debussy, a scholar of music, played the gamelan and adapted Eastern tones, expanding the musical scales for new work.

His ideas roll across Paris and the world, bringing lyricism and sounds from Nature into concert halls. Felder powerfully plays Debussy’s La Mer (The Sea), evoking ocean waves and storms. Debussy is making a new kind of romantic music.

Leaving his first wife, Debussy marries the wife of one his patrons, by civilized agreement. They have a little daughter, and the composer loves her above all, and calls her Chu-Chu. He writes music for his wife and daughter, bringing a new lightness and love into his lush work.  His charming new music  expresses adoration and humor to amuse his little girl. As Debussy’s songs fill the great hall, we are swept away by the power of his music.

Hershey Felder’s own pilgrimage to Paris and Debussy’s triumphs there meld into a story of devotion to music. Dressed as Debussy in Victorian suit and a strictly trimmed beard, Hershey Felder came to Paris to understand Debussy and to honor his mother who loved Debussy’s music.  There’s magic in the rest of that emotional story told from the stage.

In the finale, as Felder exquisitely plays Claire de Lune (Moonlight), at the intersection of two little Paris bridges, we feel the harmony of Felder’s youthful passion and Debussy’s lilting genius. The show is beautiful and magical, making Debussy and his music accessible and personal, as only Felder can do.