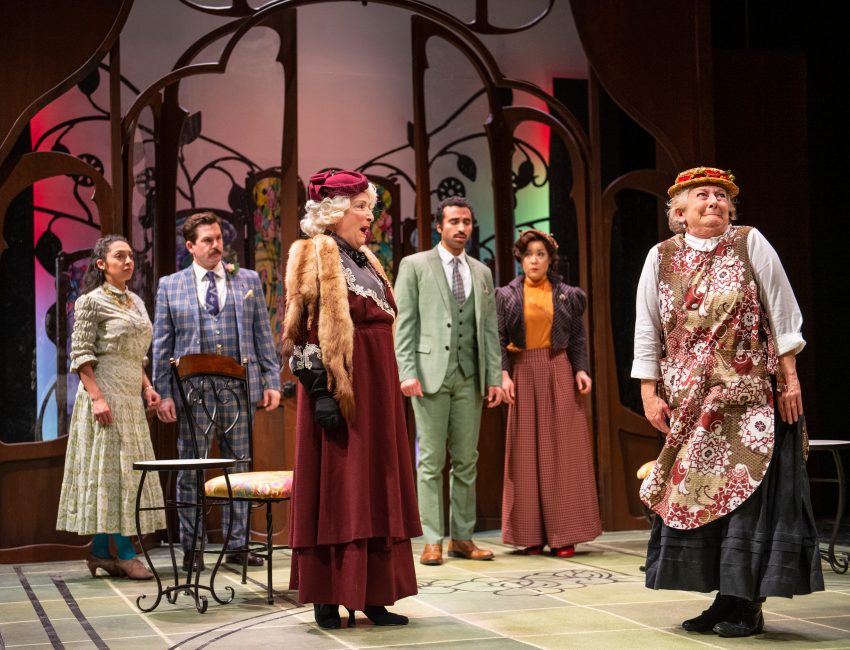 Filled with rapid fire wit and snide satire, “The Importance of Being Earnest” sizzles like Saturday Night Live.  Under Josh Costello’s deft direction, we feel Oscar Wilde ripping the mask from our illusions about millionaires, marriage, and masters.

In Costello’s “Earnest,” delight rules, tweaking rigid, British upper-class snobs. Aurora’s perfect laugh-fest, sub-titled “A Trivial Comedy for Serious People,” takes us by storm with speed and style, as Wilde did London in 1895.

By the end, three couples, including shape-shifting Michael Torres as finicky Reverend Chasuble and astounding Trish Mulholland as flighty Miss Prism, all gather to confront their aristocratic oppressor, Lady Bracknell. We smell revolt in the air, as these lovers struggle with power. It’s a deep, satisfying feeling.

Even Lane (multi-talented Michael Torres), “manservant to Algernon,” makes fun of his pitifully selfish, greedy, and rebellious boss. Since Algie has already gobbled up the tiny cucumber sandwiches meant for Lady Bracknell, they both lie blatantly:

ALGERNON: Lane! Why are there no cucumber sandwiches? I ordered them specially.
LANE [gravely]: There were no cucumbers in the market this morning, sir. I went down twice.
ALGERNON: No cucumbers!
LANE: No, sir, not even for ready money.

Living on the crumbs that fall from the One-Percenters’ tables, Algie puts on an elaborate act for his aunt, Lady Bracknell.

Lady Bracknell, aloof, snarky Sharon Lockwood, rules them all, a true Trumpean narcissist. Algernon and his co-conspirator Jack Worthing (hilarious Mohammad Shehata) scheme behind Lady B’s back. Shehata’s brilliant physical contortions reveal how oppression has twisted Worthing’s nature, too. Both Algie and Jack disguise themselves as “Earnest” and both go on secret, side-splitting trips called “Bunburying” that still crack us up! It’s Wilde’s gay humor for semi-straight Victorians.

Even Lady B’s flinty, assertive daughter Gwendolyn (fiery Anna Ishida) tip-toes around her Bank of England Mum. Ishida makes Gwendolyn as wary as a hummingbird glancing over her shoulder. But her mother radiates elitism, claiming: “The only people that dislike Society, are the ones who aren’t in Society.” Overbearing, unreasonable, and so so funny, Lady B. is an boa constrictor that eats up the world.

The two false “Earnests” capture the fancy of Gwendolen and Cecily Cardew (delightful Gianna DiGregoria Rivera).  The young women flaunt puffy dresses with intricate embroidery—Victorian Valley Girls, slaves to fashion. They, too, use their wits to survive oppressive rules. Watching them evolve from rivals to friends fills us with laughter and joy.

As “Earnest” picks up momentum in Act III, Algie finds grounds for the final words: “On the contrary, Aunt Augusta, I have now realised for the first time in my life the Importance of Being Earnest.” He has undergone a change that stirs our hearts.

Unlike these lovers, Wilde was not liberated by his Earnest-ness. He lived ahead of his time—but he certainly made them laugh at themselves! Aurora has restored freshness and meaning to “Earnest.”

“The Importance of Being Earnest” by Oscar Wilde, directed by Josh Costello, scenic design by Nina Ball, costume design by Maggie Whitaker, at Aurora Theatre, Berkeley, through Sunday, May 19, 2019. Info: auroratheatre.org