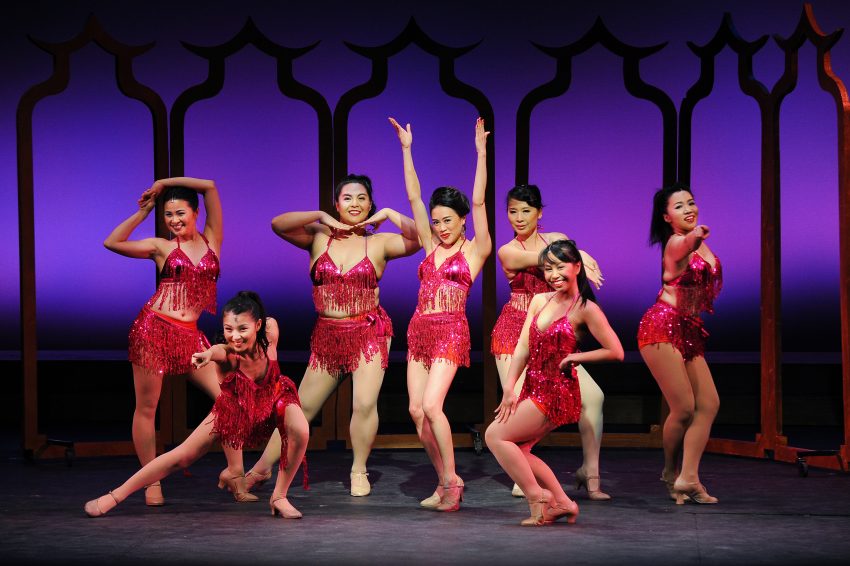 Regardless of your time in America, there’s always that funny balancing act between your ethnic background and “fitting in” with the mainstream. In “Flower Drum Song,” Mei Li says it best when she compliments Ta: “Sometimes you seem 100 percent Chinese. Then a moment later, you become 100 percent American…I think you are 100 percent both.”

This new interpretation offers an achingly authentic tale of the immigrant experience to the U.S.—beautifully told with humor and sensitivity.

Fleeing communist China after the murder of her father, young Mei-Li arrives in San Francisco and finds a job in family friend, Wang’s, failing Chinese opera theater. But on Friday’s his enterprising son, Ta, transforms the dusty old place on Grant Avenue into a swinging nightclub.

Emily Song, the astonishingly talented high school senior who plays Mei-Li, shows skills beyond her years. We’re in awe from the show opener when, under a single spotlight wearing faded blue workers’ denims, she awakens us with “A Hundred Million Miracles.” Song is convincing as the innocent, hopeful immigrant looking for a better life.

Ta (enthusiastic Jomar Martinez) is caught between two cultures, respect for his father’s traditional Chinese theater and the 50’s dance and music scene.

The flirtatious Linda Low (captivating Marah Sotelo), star of the Friday night shows, dates only white guys and wants to be an actress. Sotelo shines in “I Love Being a Girl.” She tutors Mei-Li (who’s sweet on Ta) on becoming his “American Dream” girl—with the right clothes, makeup, and attitude. Linda projects a 50s American identity.

Music Director Amanda Ku’s 10-member orchestra (hidden under the stage!) keeps pace with the action above, weaving a tapestry of sound that envelops the theater.

Director Tung Crystal embodies Mei-Lei’s timely reminder: “To create something new, we must first love what is old.”