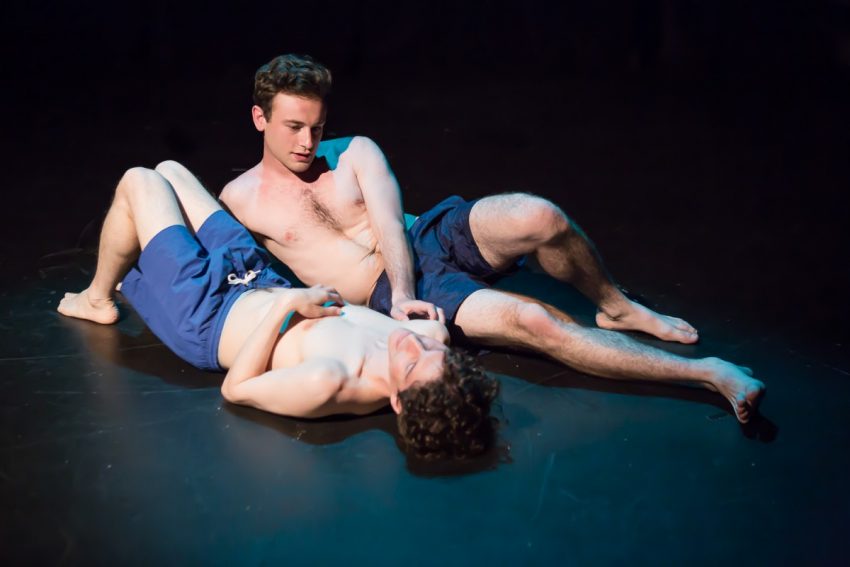 Jason (ingenious Gabriel A. Ross), an aspiring gay actor, dines with his father, Max, an alcoholic attorney (super-versatile John Fisher), at the Pacific Union Club, atop Nob Hill. Dressed in tailored suits, ties, and leather dress shoes, it looks like an interview more than lunch with your father.

Fisher plays Dad with wit and power, demanding, “Where’s your tie?” Then he commands, “We’ll have two martinis.”  Dad ends up drinking both martinis, self-medicating, as we roar with laughter.

Jason’s stuffy father represents controlling, snobby one-per centers who impose their will on everyone.  They make a hilarious pair—getting big laughs for their witty father-son banter.

Like most young actors, Jason struggles with his career and finances. Along the way, he does odd jobs that lead him to a hopeful, wise drag queen named Parnell (delightful John Fisher) dressed in gold sequins. Parnell embodies the passion for acting—she sings majestically off key with positive glee every night. Naive Jason views her as an unskilled hag, but he learns to respect her—after going through the Hollywood blender.

Jason enlists his buddy Jack, played by ingenious Jake Soss, to find work. Jason has special abilities to play scary jokes on folks, so Jack introduces him to  the smart, arrogant Hollywood action star named Clark Tail (incredible John Fisher). Clad in all black with sunglasses, Tail reminds us of a certain famous Hollywood icon. Action hero Tail represents Hollywood in frightening detail—a selfish, charming beast. In blockbuster action movies, Tail excites the teens and bros, but who will excite him? Who can give him chills? Jason and Jack answer the call.

In Tail’s quest for thrills, the three guys play a game of “gotcha,” inspired by tremendous, traumatic L.A. historical events. Fisher uses extreme physical movement and thrills to recreate huge earth-shaking events. And after each thrill, the ante goes up!  Hilariously, their action hero becomes an action junkie!

When the Mission Impossible theme plays, the amazing Soss, as Villain, gets pistol whipped and kicked in the groin, movie-style. Bright flashes of white light strategically flicker in and out, generating violence and horror. The mock-movie moves remind us of famous action movies, to more bursts of laughter.

Fisher’s witty dialogue leaves no one safe: Trump, gay actors, uptight Dads, and even theater people. Ross, Fisher, and Soss energetically weave all things Hollywood into compact, brilliant comic performances. A must see for anyone ready to laugh!