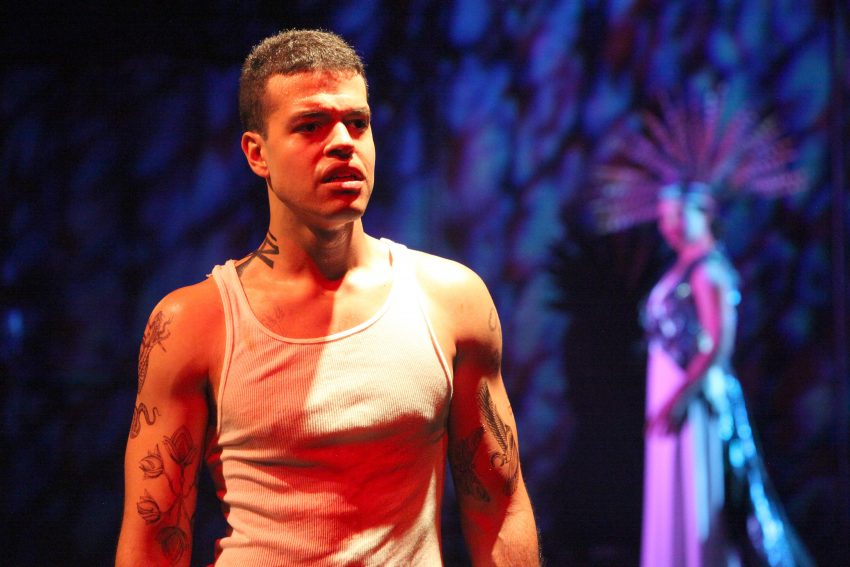 We hear the slamming of a prison door, as lights go up on Luis Alfaro’s ‘“Oedipus El Rey,” a play that makes us think about how little control we have over our lives in the U.S.—especially if you’re Latinx. Using Sophocles’ “Oedipus,” Alfaro thrusts us into a world of magic and monsters, right here in California.

Opening in the Kern County prison, it becomes apparent that Oedipus (intense Estaban Carmona) never truly leaves his prison. Esfinge, the Sphynx, tells Oedipus: “Prison may have set you free, but freedom will imprison you forever.”

While some people are free to choose their fate, black and brown youths spend their lives under a shadow they did nothing to deserve, but are forced to live under, forever.

Whether it’s the sounds of L.A. traffic, or the ancient Mesoamerican temple, lair of Esfinge, the cast creates a familiar and threatening Chicano world. With curses and monsters running rampant, we wonder: Who is a beast and who is a victim?

Jocasta (touching Lorraine Velez) has wings on her back, depicting “A broken bird”; but then she takes flight as the mighty Esfinge, depicted as Quetzalcoatl, a Mesoamerican God. She says, “My tattoos are just a map, what I earned is inside.”

Even as a young boy, Oedipus is trapped inside the prison system. He knows no other life. He was abandoned after birth by his father, Laius. But Tiresias, a priest, tells Laius that his newborn son will kill him. A terrible legacy begins.

It’s inspiring to see Oedipus use the darkness of his past to forge a better future, to attempt an escape from the shackles of life in L.A. The powerful cast use their few moments of happiness to offset the darker shadows of Latinx life.  We see hope for a better future for Oedipus and Laius and Jocasta, but they arrive at the same tragic end as so many before them.

This idea of being imprisoned by the poverty and prejudice of our own country resonates with us, and we are wondering what truly imprisons us, today? Are we trapped by the same immigration and justice system that destroys Oedipus El Rey? How can we liberate ourselves from this curse in these tough times for immigrants, youth, and honest people?