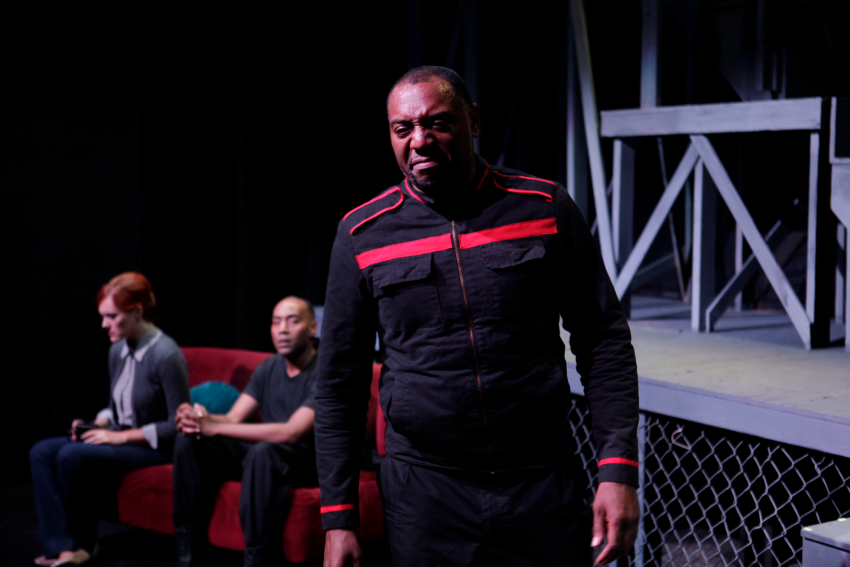 If stupidity keeps on reigning over intelligence, if lies keep beating out facts, then “Fahrenheit 451” by Ray Bradbury is depicting our future. Director Sam Tillis’ powerful production makes us feel the consequences of lies, trickery, and ignorance.

As a lifelong lover of books, I cringe at the abrasive ‘thwap’ of books flung down hard on the Potrero Stage by the furious firemen of Quantum Dragon. In black military attire, the firemen float around the stage like post-apocalyptic reapers carrying shiny metal flamethrowers. They  stomp and crunch the world’s finest books under their black boots—with devilish smiles.

Before the play, Tillis tells us not to fear the fire alarm sounds. If there were a real fire, the house lights would come on, but I quickly get the feeling that the world around me is already on fire. Projected flames sear twisting, metal staircases. The crackle of burning books fills the room and the piercing cries of the book-burning, reader-detecting robot H.O.U.N.D. make the danger feel real.

Bradbury’s eerie play starts slowly, drawing us in with a love story, flickering like a fledgling fire. Our hero, Montag (smoldering Ron Chapman), a veteran fireman, begins to realize the terror of a world without books. Montag’s affair with his neighbor Clarisse (impeccable Emily Dwyer) reminds us of college kids, eagerly trading ideas that they have just grasped for the first time. They walk and talk like lovers in the honeymoon phase.

Montag’s pill popping wife, Mildred (committed Emily Corbo) watches a wall television all day, enjoying futuristic shows where she is the star. I felt sad for her. In her catatonic state, she reminds me, sadly, of folks suffering from opioid addiction.

Fire Chief Beatty (commanding Dorian Lockett) ropes the cast together, like an Army General. He rules his lackeys by authority and familiarity, with witty quick quips. Betty, a learned man, flies jokes over the heads of his squad:  Black (tough Melanie Marshall), Holden (whimsical James Aaron Oh), and doubting Montag. Lockett’s explosive style rivets us, as he leads Montag down a treacherous path of knowledge and fire, keeping us guessing all the time. Could the Chief be, at heart, a lover of books?

Bradbury ignites our fears of a world ablaze with self-affirming TV—a prophecy of our future.

Bradbury’s play makes us feel afraid of a world consumed by self-affirming TV programs. By the end we start to feel that we are being shown a prophecy of our own future. The scary thing is that, with time, Bradbury’s narrative has become more and more real. “Fahrenheit 451” uses terror to motivate us to abandon social media, and to read a book, and take action before it’s too late.