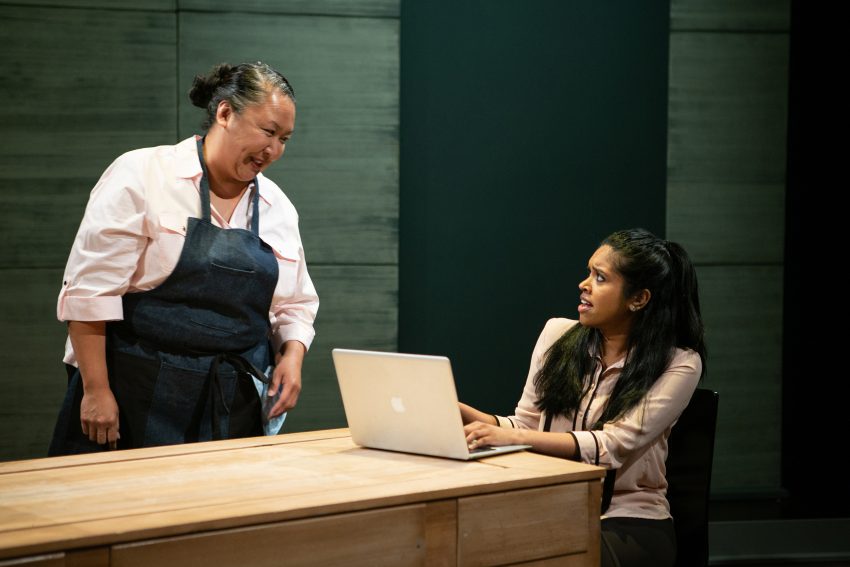 At its best “The Fit” lucidly critiques U.S. capitalism and male domination in the Tech world. At its worst, “The Fit” portrays the Asian diaspora with unjustified caricatures.

The Rueff Studio at the Strand Theater could be a conference room in a Silicon Valley office, adorned with the trademark wooden slats of gentrification. The play is set in the sterile office of Blue Sky Capital, a Venture Capital firm. ‘Tech’ culture is represented by half-assed jokes about the ill-fated Theranos and tech-bro lingo like “disruption.”

Sakina’s Chinese American coworker Jeremy (stumbling Jeff Kim) sucks up to his white boss, Paul (slick, sleazy Johnny Moreno). Annoyingly macho Paul claims that all the staff’s good ideas originate with him and demeans Sakina for her “aggressive color.” Jeremy and Paul throw around frat boy rape culture language like “No is just a stop on the way to yes.”

Ching (gracious Michelle Talgarow), observes silently, pushing a janitor’s cart and plotting her own entrance to the tech industry.

What “The Fit” does very well is depict strong women who actively fight for each other. Their admirable sisterhood does the most important work of theatre: imagining a better world. Anderson, Srinivasan, and Talgarow strike a smooth chemistry, as they commiserate and illuminate the hopeful essence of the play.

The trio of women brings to light this question: Is it better to uplift those we can inside the system, or is opting out the only way to help exploited women and workers? The answer depends on who you are. For the most privileged, like Marcia, walking away from the industry entirely is the ultimate high ground; as if to disengage from power systems is to invalidate them. For the less privileged, like Ching, the best hope is to carve out a place of relative prosperity within the system.

Unfortunately, Perloff meanders through gross stereotypes of Indian, Filipino, and Chinese American tech workers. Presumably, these caricatures set up to be broken down, but they begin to feel like a ‘worst of the tech industry’ montage. Here are some examples.

Sakina tells ‘Indian’ jokes with a fake Indian accent to put Paul at ease. It’s an unsettling depiction of self-parody for the comfort of her white counterparts and perhaps the mostly white audience. I felt like I was being catered to rather than challenged to think about Sakina’s actions.

Ching speaks partially broken English and her subplot involving corporate espionage borders on Asisan stereotypes. Jeremy, whimpers and flips his opinions on a dime to please his boss. Ching further emasculates him with rumors that he might be gay.

Even Marcia is reduced to a scolding white savior when she tells Sakina not to walk away from the industry, rather than take a deal that could make her millionaire.

Despite these satirical strokes, Perloff makes a valid critique of U.S. capitalism’s utter disregard for morality for the sake of profit. Sakina’s journey epitomizes the conflict between a moral choice and personal gain.

Will Sakina help her less privileged comrade, Ching, by working with abusive men? Or, will Sakina abandon Ching and jump into her safety net of wealth? Go see the play and find out.