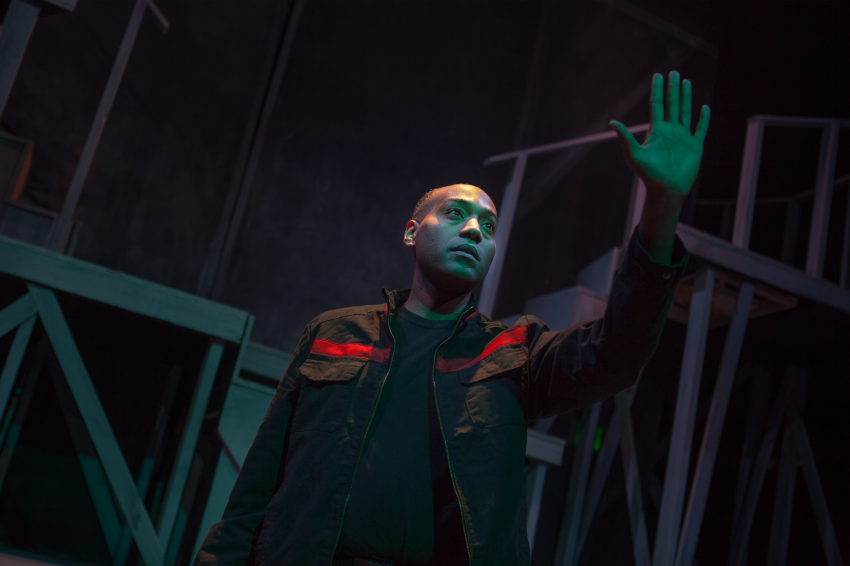 Written in 1953, “Fahrenheit 451” is fifty years ahead of its time. We have become the polarized future that Ray Bradbury feared.  We are all distracted by social media and USA Today-style journalism. Biased talking heads influence our political opinion more than reading.

That we should have a president who glories in the fact that he does not read and who receives his news in soundbites from lackeys who give him what he wants to hear should scare us. In this era of “fake news,” “alternative facts,” and outright lies we have slipped into thought control from Our Glorious Leader. We have moved closer to Bradbury’s future than ever.

On a gray, ashen stage, “Fahrenheit 451” opens with fireman Guy Montag (complex Ron Chapman) expressing quiet satisfaction about his job of burning books. In this dystopian world, books are evil because they present so many contradictory ideas.

But Montag’s young neighbor Clarisse (spirited Emily Dwyer) challenges his sense of righteousness.  Clarisse spouts revolutionary ideas about the beauty of books and the exchange of ideas.

Despite the danger of being discovered by the boss, tyrannical Fire Chief Beatty (passionate but brutal Dorian Lockett), Montag begins to question his long-held beliefs. He tries to convince his pill popping wife Mildred (doll-like Emily Corbo) to join him; but his words fall on deaf ears.  She would rather watch her “parlor TV” (think flat-screen) with her vacuous, non-thinking neighbors.

Chief Beatty represents the face of authority but with fascinating conflicts.  Lockett’s fierce, inspired portrayal of Beatty makes “Fahrenheit 451” dynamic and explosive.  Beatty rants about the dangers of reading, warning that he can tell if Montag is reading. Oddly, Beatty himself recites stirring literary passages to support his argument, so we wonder where he has learned them.

When Montag meets Clarisse’s grandfather Faber (multi-talented Annette Olivera), the old man reluctantly agrees to teach him about books. And insists on using his own invention, a strange cell phone-like device.  All this from Bradbury inventive mind fifty years ago!  The old man and Montag form a bond that leads to the dramatic, violent ending.

Quantum Dragon has brought an important and inspiring play to life at the right time. How many millennials even recognize Bradbury’s heroes, including Aristotle, Dostoevsky, Dickens, and Poe? The race for riches has already displaced the search for the truth, right?

Director Sam Tillis makes this seminal work of science fiction relevant and timely. He gets strong support from a great crew. Kudos for Set Design by Katie Whitcraft, Lighting Design by Sara Saavedra, and Costume Design by Emily Dwyer and Marisely Cortes.

“Fahrenheit 451” is vital and important and we must heed its warning. Gripping choice and direction by Sam Tillis, who lets us know that we are in a battle for our future.