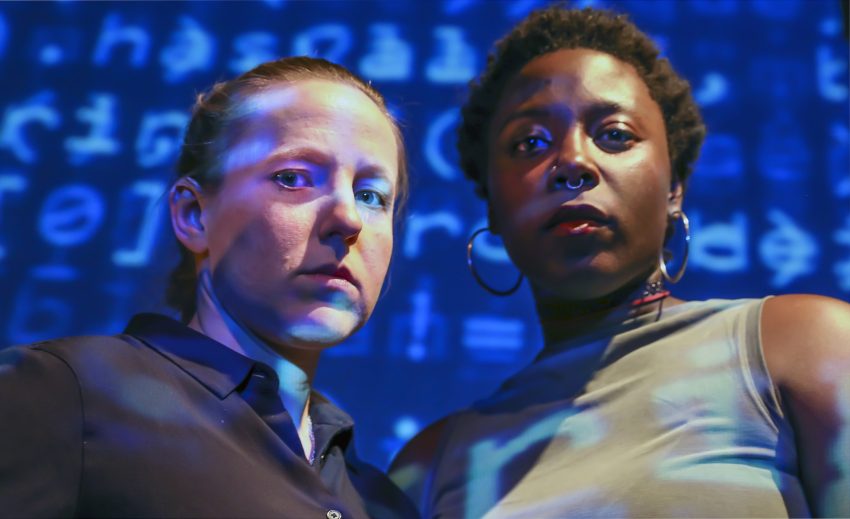 Christina Gorman’s political thriller depicts the intriguing case of a couple who each want to “do the right thing.” We begin to wonder if their marriage can outlast the siege of discovering #MyWifeIsAWhistleBlower.

For an intense 70 minutes, Gary Graves’ sharply focused lighting shows Roan (engaging Lauren Hayes) and Nat (mesmerizing Jeunée Simon) at home in D.C., at the Moscow airport, and on the run. Gregory Scharpen’s striking sound effects move us swiftly from place to place.

In the well-known story of Edward Snowden’s leaking of NSA secrets, many cloak and dagger tales still lurk. Snowden became the world’s #1 Whistleblower, exposing illegal U.S. cyber wiretapping. We all have a shred of privacy left because of Snowden’s bravery.

For that public service, he has been hunted from Hong Kong to Russia. The Guardian newspaper carefully vetted and published his secret files for all of us to read. Evidently that’s a no-no in the “Land of the Free.”

Playwright Gorman has taken a provocative political step forward. We meet her witty married lesbian couple, who work and live in Washington. Roan is the inscrutable computer analyst, and Nat, her wife, is a powerful defense lawyer They complement each other from opposing extremes: Roan takes the secretive Snowden role. Her top-secret work for the NSA keeps her from confiding in Nat, her wife.

Nat is an exuberant, enthusiastic, and energetic lawyer who works hard to defend the rights of her poor defendants. Roan and Nat live on the edge of their differences; they beautifully engage us in their love and in their ideals.

But suddenly, a surprise hits home: Roan disappears on a secret trip. She takes with her a massive trove of government data on U.S. citizens. She flees to Hong Kong and, like Snowden, ends up, comically, in the Moscow airport.

After Nat is grilled by the FBI, suspiciously, she tracks down Roan. The play spotlights their misunderstandings and their dismay in each other’s path. The intense disagreement between these devoted spouses has a rising and falling rhythm that draws us slowly into their principled, idealized perspectives.

Like Snowden, Roan is looking at the bigger picture—at the illegal and indiscriminate breach of privacy for all U.S. people. Roan has taken on the burden of whistleblower, and Nat’s life is destroyed. Brave Nat is now forced to give up her life—her clients, her partners, her colleagues. She wants her life with Roan again, and their personal privacy back, but they are marked people—under FBI and CIA scrutiny.

“Roan@The Gates makes us question what it means to be moral and to be loyal. We ask ourselves: How much are we willing to pay to Do the Right Thing? Where is the line between the personal and the political? Jeunée Simon makes a powerful case that the price is too high. But where would we be today without a brave whistleblower? Gorman takes us step by step, dramatically, to enlightenment