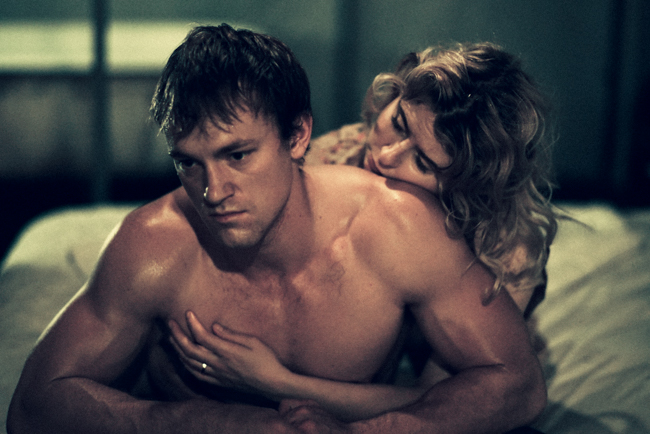 In a storefront theater in Brooklyn, Stanley Kowalski charges in with a roar of “STEEEELLLLAAAA!” that echoes from decades past. Max Carpenter is a down-to-earth Stanley and yet, superhuman in the great role.

Carpenter’s Stanley has his feet on the ground—he is rude, crude, smart, and nobody’s fool. His Stanley seduces the audience because he embodies great American traits: force, ingenuity, and yes, genius. His Stella, the ethereal and touching Isabel Ellison, creates a perfect pairing.

On a balmy night in May, I ventured to the Mister Rogers Theater in Brooklyn to see a groundbreaking production of “Streetcar.” The Coven/Precariat Production re-charges the classic play, making each character contemporary and touchingly present.

I knew that Carpenter, a powerfully focused actor from San Francisco, would be doing Stanley; and then I found out that Mx. Russell Peck would be the first gender queer actor to play Blanche. For an old theater buff, these changes are enticing and off the grid. Peck hits a magical and emotive chord with an intriguing Blanche.

What a surprise to find a tight, small theater out near Crown Heights with a long and narrow black platform right down the middle of the room. There’s one row of seats against the wall on either side. We are looking right through the set at the folks across the way. On the platform, there’s a rough and tumble kitchen, a messy table and chairs, and a rumpled, curtained bedroom. A perfect grungy setting for an intimate “Streetcar.”

Carpenter’s Stanley knows his terrain in New Orleans, and he is not a brute beast, at all—he’s a clever, inventive U.S. worker who works hard and demands his due. You don’t get away without paying Stanley what you promised.  This Stanley won’t be fooled by fancy words in legal contracts. He stands up for what is his and Stella’s. This Stanley won’t be sidelined by evasions or trickery—he comes from the generation of pre-Reagan workers who demand to be noticed. He’s a revelation in Carpenter’s interpretation. He makes us think: “Where are these Stanley’s, now?”

I could call it super-realism, or meta-realism—the actors are among us, rushing in and out around the thrust stage. They wander in front of us in the aisle, talk in front of the porch, and disappear into secret offstage regions. Director Kevin Hourigan’s fast pacing makes it a physical show, every moment counts.

And when they are onstage, they summon up fiery passions and naturalistic acting that sweeps us along. We share Stanley’s passionate love for Stella  and the developing stages of Stanley’s fury.

David J. Cork makes a heartfelt and heartbreaking Mitch, who awkwardly courts the elusive Blanche. As a younger Mitch, Cork captures the naïve qualities of a working-class hero, who works hard to figure out this Blanche.

As Blanche Dubois, elegant Russell Peck brings a studied composure to the role. Peck invokes a whirlwind of manipulation and seduction, which ignites Blanche in new ways. It’s a revelation to see Peck build to a ravishing and unexpected final scene–it’s subtle, yet startling, too.

And as Eunice, Stella’s neighbor, Yvonna Pearson makes a beautiful and practical friend, touching in her care.  I would be glad to see this show again, and watch the actors build toward the final surprises–and it does surprise. It’s a new “Streetcar” for a new age.

Somehow, it felt like the first performance ever of “Streetcar”—this is what it must have been like when Marlon Brando and Vivien Leigh first splashed across onto American movie screens. Director Hourigan gives us the raw and rocking “Streetcar” that everyone should catch.