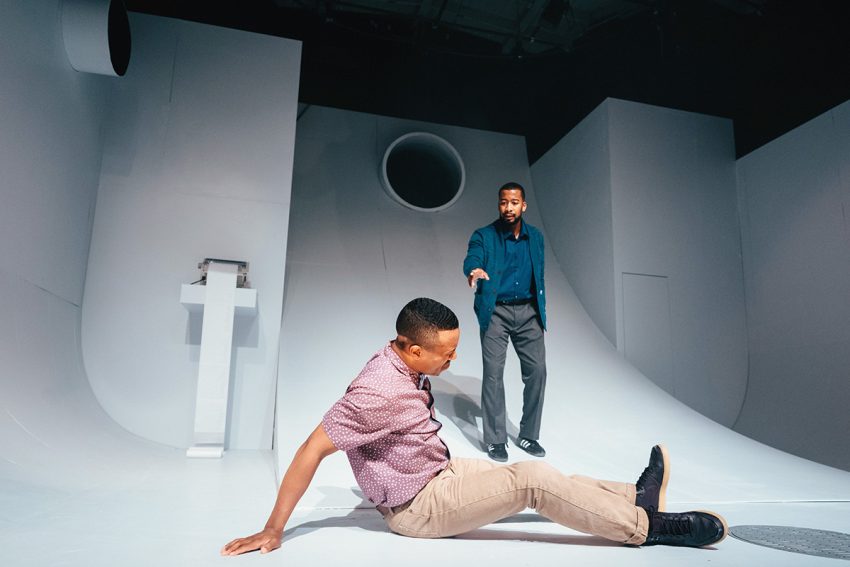 One after the other, we meet four intriguing, intelligent, young black men, ranging from age 15 to 30, each likely killed by police. Ejected out of big pipes or down a towering white slide, they don’t know why they end up in the shocking white space, or what kind of place they are they in.

In this surreal geometrical, curving white space, Director Darryl V. Jones invites us to feel what they are feeling, to see the U.S. through their eyes.

They look out and talk to us, looking for answers. We feel uncomfortable, wanting to help but realize we are merely observers. They don’t want sympathy or platitudes: Understanding is all each young man wants. They want to understand how they got here and how to get out.

As they wonder, a paper airplane glides in with a set of directions scribbled on it—riddles to liberate themselves.They must comprehend that being Black leads them to struggle. In order to survive, they must learn to live in a white man’s world.

The last to join is the youngster Tiny (talented Dwayne Clay), cut off at 15 years old. The three older guys befriend him, especially Daz (dazzling Tre’Vonne Belle), his nearest in age. Tiny was killed playing with a bright orange toy gun, So they need to teach him the Oath that every black kid must learn to  survive: “Show your hands, don’t look mad, don’t be angry because they will shoot you if you scare them.”

Director Jones gives us masterful pacing, stunning set design by Celeste Martore, and evocative lighting by Stephanie Anne Johnson. The outstanding cast surprises us with sharply drawn characters. When the guys do the “old shuck and jive” to amuse the audience, they explode Black myths, open American sores, and reveal sad truths. Comedy, dance and minstrel songs add brilliant touches of joy and Black history to the rich texture of “Kill Move Paradise.”

James Ijames masterwork explores the truth of the Black Lives Matter movement. The most mature victim arrives first: Isa (dynamic Eddie Ewell), a 30-something young man in a 70s blue button-up sweater, delivers a moving monologue, reading the list of the dead. We share Isa’s confusion, as he tries to figure out our culture.

Isa can see us watching him, and he wonders what we are doing there, forging an intimate connection with us. Isa tells us that he was eight when he first realized he was “scary” to whites. He tell us how, as an eight year old, he asked his teacher for a hug; but he saw the fear flash in her eyes. Her “brittle hug” cut like glass. Ewell’s warmth and feeling take us with Isa on his journey.

The next arrival is a smart 80s collegian named Grif (confident Lenard Jackson), in a sharp pink shirt and bow tie. He tries to use use his amazing school smarts to get out of the no exit trap. Jackson’s Grif is unforgettable, too.

Next, Daz, bouncy Tre’Vonne Bell, in black sweater with red and yellow stripes, asserts his rights. Daz rebels and argues, unwilling to accept his fate. Bell brings assertiveness and a powerful humanity to Daz. Each role is etched in glass.

Coming from distinct eras and styles, they each arrive at a realization. They try out song, dance, argument, and denial. Come and see how they feel, and how we react.

At last a play on Black Lives Matter that lets us all see what’s happening from the young African American men’s point of view! A Must See! for so many reasons—dramatic, technical, and political. Time to see it, again.