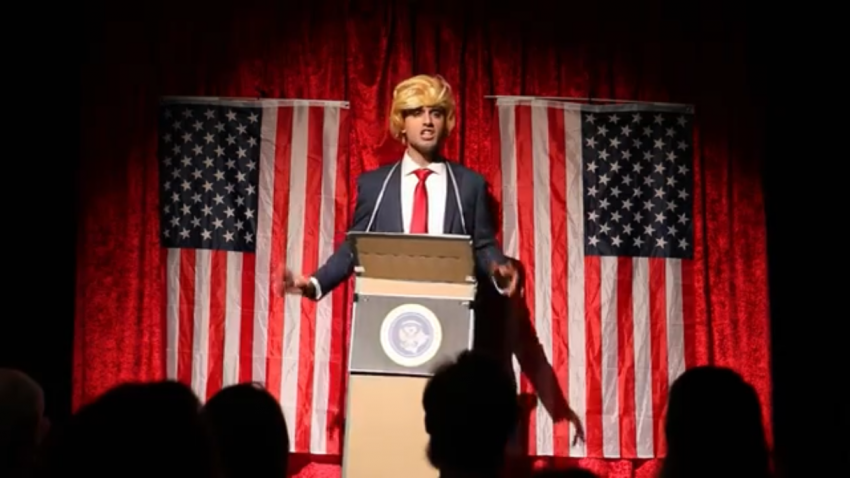 As the final numbers trickled in on the night of the 2016 election, Americans watched in horror as a washed-up reality TV star and crypto-fascist became President. Now, with the spectre of another term looming, the fate of our democracy hangs in the balance. 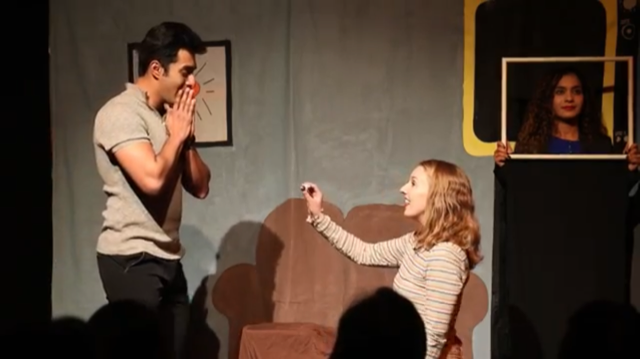 “20/20” allows us to choose our adventure. As 45 exits, we get to vote on our fate—with options ranging from electoral progress, to political revolution, to simply sitting back and doing nothing. The top three scenarios—impeachment, assassination, and general strike—appear back-to-back, each more and more outlandish.

We see the future through the eyes of Anna and Soche (sympathetic Jess Thompson and Nadeem Anjum), a married couple in SF. Their world is a thinly veiled distortion of ours, ruled by companies like GooAppleZon and McChicFilKing. Grasping for normalcy, they kiss through N95 masks at their wedding, while California burns all around them.

We begin at an impeachment hearing, where Adolf Twitler faces indictment for a most heinous crime. No, not sexual misconduct or colluding with Russia—but “Twitting” insults at fellow Republicans. Swept up in the campy, over-the-top acting and quirky dialogue, my elation turns to dread as Pence assumes office, and extremists round up queer folks and send them to internment camps.

Theatre Makers creates enough emotional distance to pull off the stunt, keeping the tone silly and surreal—even as they stage our worst fears. Before we can recover, we find ourselves howling as an endearing assassin creeps around to the Pink Panther theme song, pussyhat at the ready, rocket launcher bulging from beneath her trench coat.

The best writing appears in the most radical future: the general strike. Just as we’ve gotten comfortable with the idea of sitting on the couch to fight for change, the notorious Mr. ZuckerGates (Samarakoon) uses “Alexis” to cross picket lines within our homes—by tricking us into ordering pizzas. Puns about toppings take center stage, and our laughter allows us to see echoes of the real Surveillance State.

The skits bring up some hard-hitting questions: What are we willing to sacrifice for our freedom? How much autonomy have we already given up? I left wishing I had seen even more scenarios, and that audiences had been challenged to vote further outside the system. 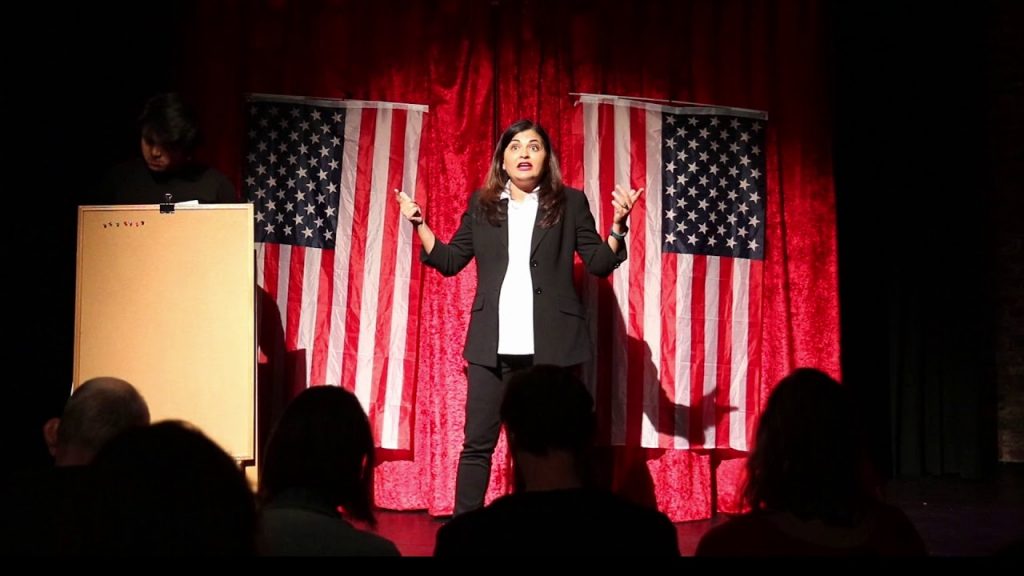 “20/20” is full of side-splitting jokes and wacky antics, satirizing American culture and how quickly we’ve accepted life under fascism. But embedded in all this is a devastating critique of the U.S.—probing more deeply into the heart of our political predicament than SNL ever could.

Unlike most progressive plays, “20/20” does not offer any one solution. Instead, Theatre Makers invites us to engage in a thought experiment about the not-so-distant future. They do what the American electoral system has failed to do: leave the decision in our hands.