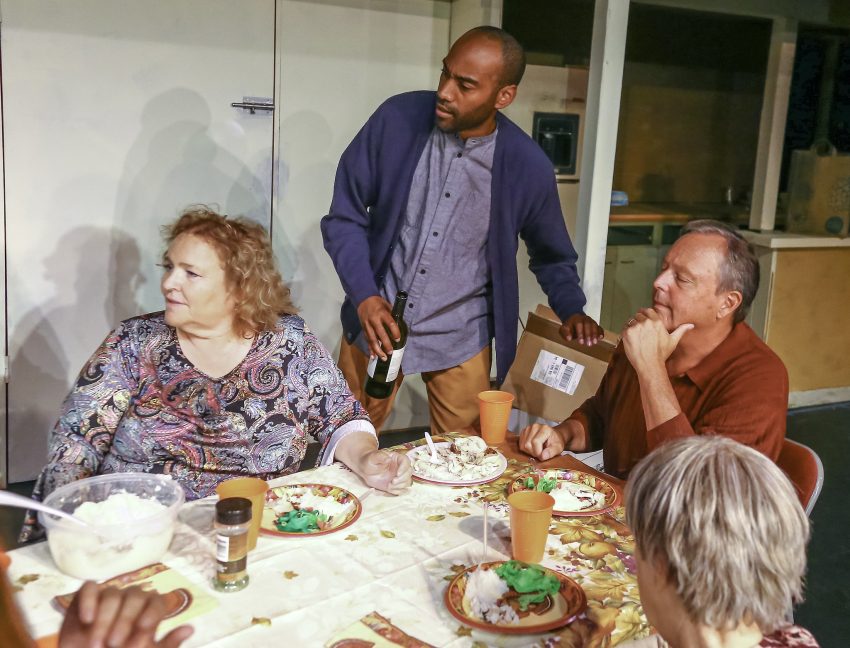 Stephen Karam Looks at US from a Funny Angle

What if aliens were observing us from another world, watching our daily lives? Would they be amused? In other words, what makes us do the terrible, wonderful, and mysterious things we do every day?

In “The Humans,” Stephen Karam puts us under the microscope and exposes the emotional, medical, and economic traps built into the U.S. system. In his Tony Award-winning play, Karam considers the problems of a hard working family, as they slip downwards from the Crash of ’08 into bankruptcy and self-ridicule.

But United States-eans don’t like to admit those things. They see them only as personal failures.

Michael Walraven’s superb double-decker set shows us a strange two-level basement apartment, sunk into the ground, with bars on the windows and a grim inner courtyard. A rickety, old, wrought-iron spiral staircase joins the upstairs and down. The claustrophobic set lets us observe the captive subjects.

The Blakes, a typical white suburban family, slowly unravel their secrets over a funny, explosive Thanksgiving dinner. The sentimental Blakes have driven for hours from Scranton, Pennsylvania to lower Manhattan to visit younger daughter Brigid (sympathetic Olivia Browne). Over the course of the evening in a sketchy two-level basement apartment in Chinatown, Karam gives us a slice of life comedy-drama about a witty, feisty Irish family.

Once in alien New York, the hard-working suburbanites complain hilariously, bring bizarre news, and share their secrets, which unfold like a terrible yet strangely humorous flower. Brigid’s guy, congenial, educated Richard Saad (delightful Ron Chapman) tries to engage her family—but they overwhelm him. The earthy Blakes bring lots of baggage.

Mom, Dierdre Blake (delightfully cynical Laura J. Davies) will not be pleased—she finds fault with the apartment, the steps, the toilet, the kitchen. A suburban mom, she is not happy to see her younger daughter living with a slightly older guy, unmarried, in Chinatown. As working class Americans, the Blakes disapprove amusingly—even as they totter on the precipice, themselves.

This relentlessly conventional Irish-Catholic family conceals secrets stemming from the Crash of ’08, personal scandals, and expensive illness. But that’s not the topic of discussion—no, the topic is Brigid’s life among the outcasts in Chinatown.

Mom Dierdre and dad Erik (emotional David Francis Perry) expose plenty of American nightmares at the Thanksgiving dinner. They are traveling with Momo (terrific Marilyn Hughes), the wheelchair-bound grandmother. Momo softly mumbles incantations while the family squabbles. Marilyn Hughes brilliantly plays Momo as a self-contained, yearning grandma whom they treat like an infant.

Dad Erik brings down the family and the wrath of his overbearing wife by announcing what happened to his job as janitor at a Catholic school. And sister Aimee (engaging Alicia Kraft), a lawyer, brings down the house. She reveals secrets about her job, her girlfriend, and her health. Kraft unfolds the layers of Aimee’s despair subtly and enchantingly.

Director Patrick Nims brilliantly choreographs humans under the microscope. We are observing the intimate collapse of the U.S. middle class–economic, medical, and emotional. Nims and the great cast make it funny and touching, as they look at the grim neighborhood and feel their fate descending. Don’t miss Novato’s breathtaking version of La Comédie Humaine.