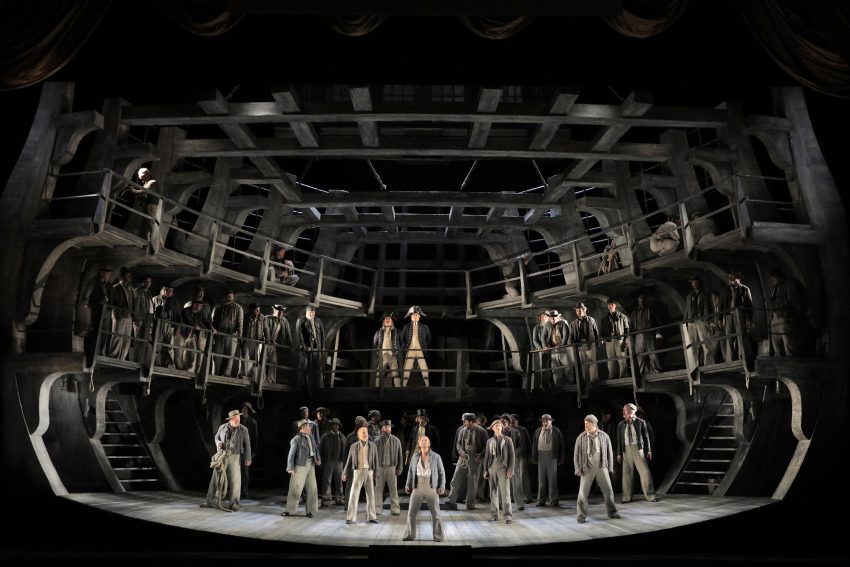 Watching the opera “Billy Budd,” set on a violent, claustrophobic British man-of-war during the French Revolution, is like immersing yourself in an enthralling novel. Indeed, few operas are as literary as this one, based on a novella by Herman Melville, with the libretto written by the great novelist E.M. Forster and Eric Crozier, cofounder of the English Opera Group. This story of an innocent young sailor whose “beauty, handsomeness, goodness” cause his destruction is as richly multilayered as a Sacher Torte.

Happily, it’s in English (with English supertitles), so it’s easy to follow the story and all its subtexts. This is no mere adventure at sea.

The time is 1797. The Revolution is still raging, and the British are at war with the French. With two others, Billy (baritone John Chest) has been impressed—forcibly taken—from the merchant ship Rights o’ Man to serve on a British warship, The Indomitable.

The Indomitable’s Captain, Edward Fairfax Vere (tenor William Burden), is an educated, fair commander. Vere knows that his brutal Master at Arms, John Claggart (bass-baritone Christopher Van Horn) is hated by the sailors and commanders. But fearing both revolutionary influences and mutiny—we hear often of what happened on another ship, the Nore—he depends on Claggart to keep threats of each at bay.

In a gripping, wonderfully sung aria, the quietly forceful Van Horn conveys why Claggart despises Billy Budd on sight. Claggart can live in a world he sees as utterly cruel, degraded, and dark. But Billy represents the polar opposite: generosity, kindness, and beauty. For Claggart to continue, Billy must be annihilated. Claggart sees this murder almost as his fate: “It is for me to destroy you.”

After trying to set Billy up, Claggart tells the captain that Billy has been inciting the sailors to rebel. Vere knows this isn’t true. When he summons Billy to defend himself, Billy is so shocked and angered, he can’t even stammer out a reply. In frustration, he strikes out blindly at Claggart, and the blow kills him.

On a naval ship in wartime, striking an officer is a capital offense.  Vere summons two officers for a “drumhead court-martial,” but they appeal to Vere for wisdom.  Vere refuses, singing of Billy:  ”It is for me to destroy you.”

There’s so much to think about here, about fate, justice, evil versus innocence, even Christian symbolism, and homoeroticism (everyone calls Billy “Beauty” or “Baby”).

And then there’s Britten’s music (Lawrences Renes conducts the S.F. Opera orchestra), which evokes everything from the surging sea to a prisoner’s last thoughts. The orchestra takes over when Vere goes offstage to tell Billy he must die. During that endless pause (actually, three long minutes), we hear each section, one by one—the brass, the strings, the winds and horns—playing a series of chords during which we can only imagine what transpires. We hear these unforgettable chords again, section by section, before Billy’s end.

In this all-male cast, the principal singers, the chorus members, even the eight children, well deserve their standing ovation. Van Horn, whom we’ve seen in many productions (most recently in “Orlando,” last June), is a chilling Claggart; his bass baritone can go right through you. Burden is a believably conflicted, long-tormented Captain Vere. And Chest, making his company debut as Billy, is almost perfect.