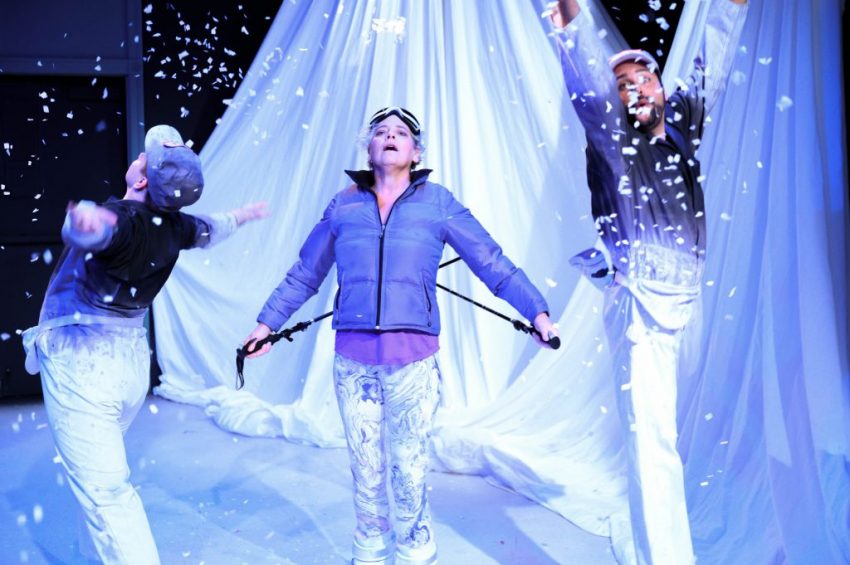 Under the deft hand of director Ariel Craft, a new vein has been opened in San Francisco satirical theater. With playwright Megan Cohen and the brilliant acting of Stacy Ross and Phil Wong, Cutting Ball Theater has launched a new way of looking at classic theater.

In their “Free for All: A New ‘Miss Julie’ for a New World”—based August Strindberg’s Victorian play “Miss Julie,” Cutting Ball transforms the 1888 play into a shrewd commentary on our lives, today. Cohen and Craft make Strindberg sing about the rich and the poor in San Francisco—as the climate changes radically.

As befits a theater located between City Hall and the Tenderloin, Strindberg’s play (about a spoiled heiress who seduces and abuses her chauffeur and maid) opens with a brilliant scene where Miss Julie (elegant Stacy Ross) is wildly skiing down the slopes of Nob Hill in a hilarious, deadly snow storm. Craft’s stagecraft is funny and astounding.

John is out and about doing the shopping for the millionaire class, while Julie sports herself. Miss Julie cannot comprehend how the poor and threatened folks down below actually live. Ross creates the perfect snob in her Julie.

Wong, another sharp satirist, heightens the stakes between Nob Hill and Chinatown, while Julie looks down her nose at the peons without a chairlift. She condescends to the people who shop, walk, or live in Chinatown or the Tenderloin. Julie gobbles up all John’s deviled eggs with glee. She represents all those whose taxes have been cut by their buddy in D.C.

We in the audience take the place of Hohn’s fiancee Christine, the observer. We join the actio and judge the unequal conflict between the heiress and her workers. All in all, a stirring comic tour of San Francisco’s privilege versus poverty. Craft and Cohen’s comedy shows why the City smells so bad these days.