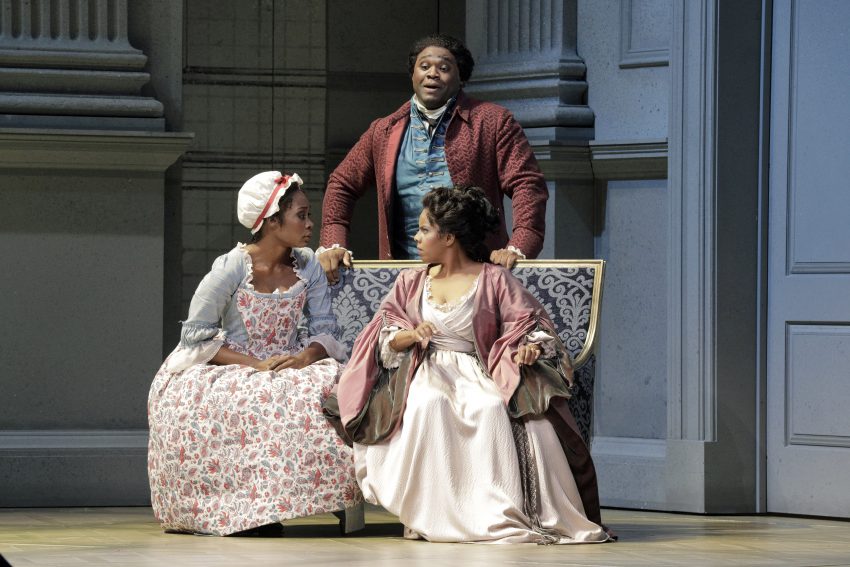 Sometimes it takes a lot of effort from a director to make a classic opera relevant, centuries later. In the case of Mozart’s “The Marriage of Figaro,” an opera warhorse if ever there was one, the times have caught up with the story:  a powerful man believes it’s his right to bed his cute young female employee. Now that #metoo has exposed big shots abusing their power over women, Mozart seems more current than ever.

That abuse of authority gets buried in the serviceable, towering colonial setting, which seamlessly supports transitions between scenes. Rather than questioning authority, the cast’s effervescent performances set a light comedic mood. It falls upon the orchestra to bring out the darker undertones of the story.  The S.F. Opera musicians, led by Henrik Nánási, magnificently display the full spectrum of Mozart’s colors and his deeper, ominous insights.

Set in 1786, in Philadelphia, with the count’s elegant colonial mansion under construction, the early American staging hints at revolutionary hopes. Maybe they are building a new, more equal country, too?  But it feels a bit gimmicky.

A giant screen saver projection of neo-classical buildings adorns the curtains during the Overture. An American flag with 13 stars briefly appears twice, once in a witty but unnecessary recreation of Archibald Willard’s painting of “Yankee Doodle.” But the message struggles to emerge.

It falls on the orchestra to highlight the theme that “the times, they are a-changin’.” Conductor Nánási deftly emphasizes the upheavals in tempo, dynamics and key modulations. He leads the Overture at breakneck pace, and brings forth dark, violent chords in the “vendetta” (vengeance) aria. The orchestra shines with lyricism in the arias of the Countess (luminescent Nicole Heaston),  with a bubbling emotion that pervades the entire opera.

As Head of the servants, Figaro (clarion-voiced Michael Sumuel) amuses with superb slapstick. He also conveys bottled-up rage and gritted teeth in his “sue vol ballare” (“If you want to dance”).  Figaro promises to teach his boss the Count Almaviva (deliciously boorish Levente Molnár) a lesson in behavior towards women. Sumuel captures Figaro’s cockiness as the master of all trades.

As Almaviva, the stentorian Molnár is born entitled and imbued with privilege. His truculent looks evoke Harvey Weinstein. When he attempts to touch Susanna, I feel his cringy creepiness, uncomfortably.

As Figaro’s fiancee, the pretty maid who captures the Boss’s imagination, Susanna (Jeanine De Bique) has  a bright perky tone. De Bique’s voice, full of candor and innocence, perfectly reflects her role as a young, straightforward servant in the aristocratic mansion.

When the philandering Count abandons his melancholy Countess, Nicole Heaston’s poignant laments move us profoundly. In her opening aria and the thrilling “Dove sono,” her richly hued lyrical tone touches  deeper emotions. Nánási and the orchestra literally breathe along with her.

As suits a single-minded teenaged boy with raging hormones, Serena Malfi gives Cherubino a vivacious forcefulness. Malfi’s notes emerge bright and pure of pitch, direct and unadorned.  Here again, Nánási changes tempi on a dime, dangerously stretching the beat to convey Cherubino’s confused despair in “Non so più cosa son” (I do not know what I am).

Director Michael Cavanaugh’s staging asks: Why set Mozart in revolutionary America? Maybe making fun of a rich white man abusing his power is enough. After all, Count Almaviva   gets his comeuppance for his misdeeds.  Maybe that’s enough to make “The Marriage of Figaro” American.