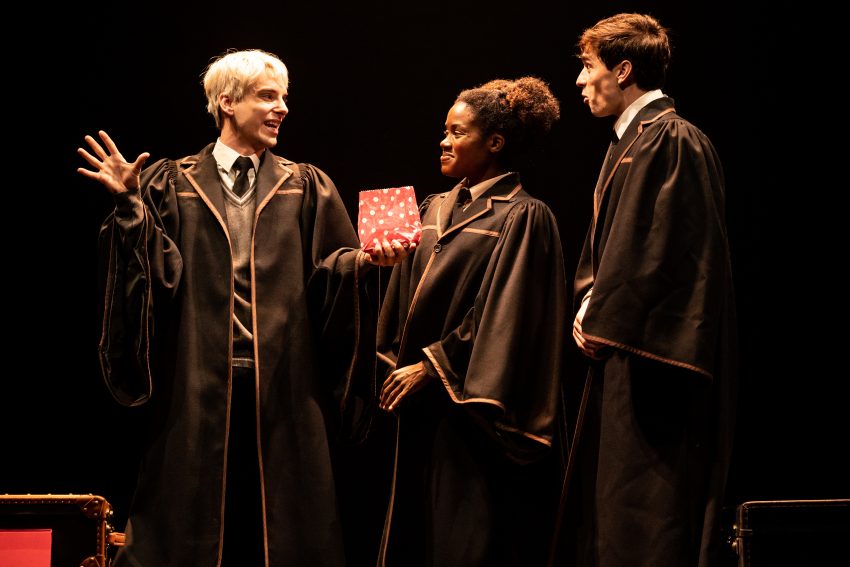 Harry Potter has always been a hothead, but in “Cursed Child” we get to witness his deliciously dark side. Playwright Jack Thorne shows us the results of being an orphan who lacks self-assurance.

Fans know his epic story–how Harry Potter (firecracker John Skelley) spent his whole childhood destroying the Dark Lord Voldemort, repeatedly. Now, 22 years later, his teenage son Albus (rambunctious Benjamin Papac) must confront that darkness.  Harry is so wrapped up in his own trauma that he ignores his son’s attention-seeking shenanigans.

Their mental health problems get passed on because habits remain. The results of abuse, marginalized oppression, and abandonment trickle down to the next generation. “Cursed Child uses Harry and Albus’ complicated father-son quarrels to show how we can break the generational curse.

Playwright Jack Thorne, director John Tiffany, and teams of designers evoke the same giddy feelings we get from reading the Harry Potter books. Except, we get to witness a darker side of the famous Harry Potter, a darkness that lingers within us. Like Harry we can be oblivious to it until dire events force us to change.

“Cursed Child” boasts a fine balance of drama and magic. Just when we thought we were numb to old school trap doors or off-screen special effects, we sit wide eyed and mesmerized! To get into the Ministry of Magic, Wizarding World government headquarters, you’ve got to go through a pay phone. When illusionist designer Jamie Harrison somehow gets two actors to squeeze through a tiny payphone receiver, I look at my neighbors for reassurance. Did that just happen?

I get goosebumps when classroom lessons at Hogwarts’ School of Witchcraft and Wizardry transfigure into choreography with fire streaming out of the students’ magic wands. Only the wands of hopeless Albus and his nerdy best friend Scorpius (sprightly Jon Steiger) refuse to work. 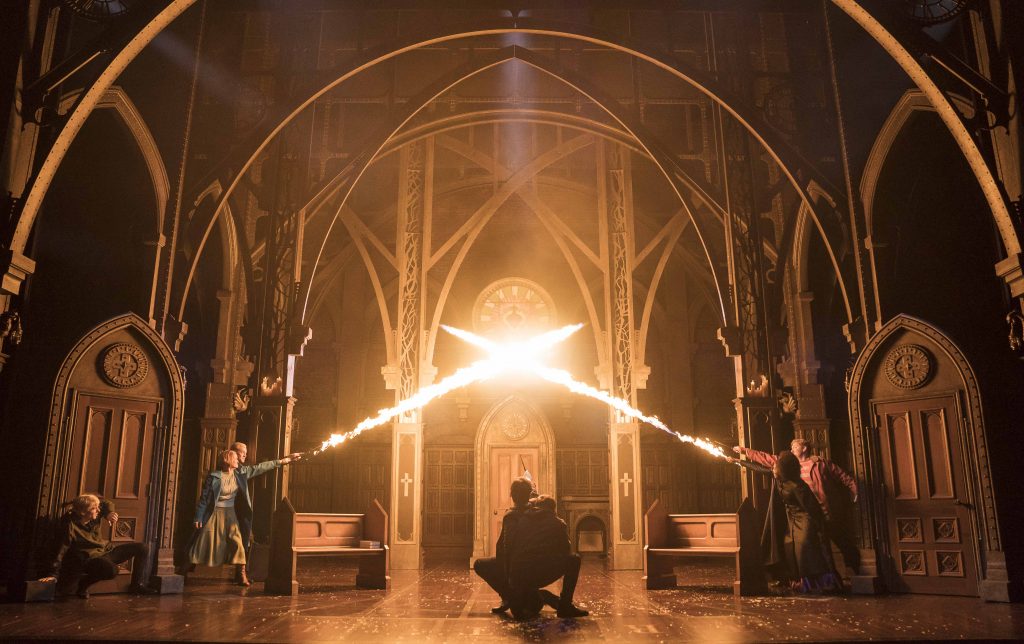 Scorpius has the same platinum blonde hair as his ominous father, Draco Malfoy (spot-on Lucas Hall), Harry’s villainous arch-rival. Dad Draco is so hot! He sure aged well—looking like a sexy, angry Legolas from Lord of the Rings.

Harry’s ego can’t take it, and he tries to ban Albus and Scorpius’ friendship. I grew up with teenage Harry but I’m definitely not rooting for him this time, which I’ve got mixed feelings about. It’s like the past roles have switched side:  Harry becomes a villain rather than a hero, this time around. 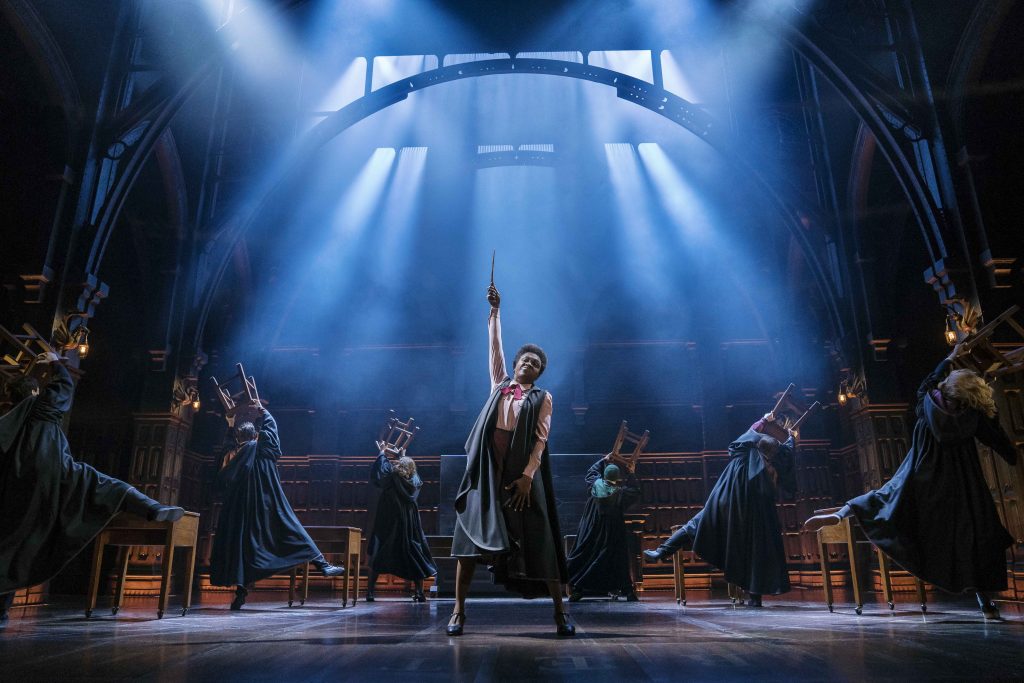 Harry still has abandonment issues and projects them onto his son, Albus. I feel the younger wizard’s frustration when his father tries to give him a “moldy, old blanket” to take to school. The blanket is the only thing left from Harry’s murdered parents, but Albus rejects Harry’s sentimentality, and we agree.

But I do care about the wonderful lighting effects by Neil Austin. In Part Two, we join rebellious Albus and reluctant Scorpius on a time traveling adventure. When the two young wizards go back in time, waves of light engulf the theater—time itself is bending around us. Their time meddling creates a devastating future. 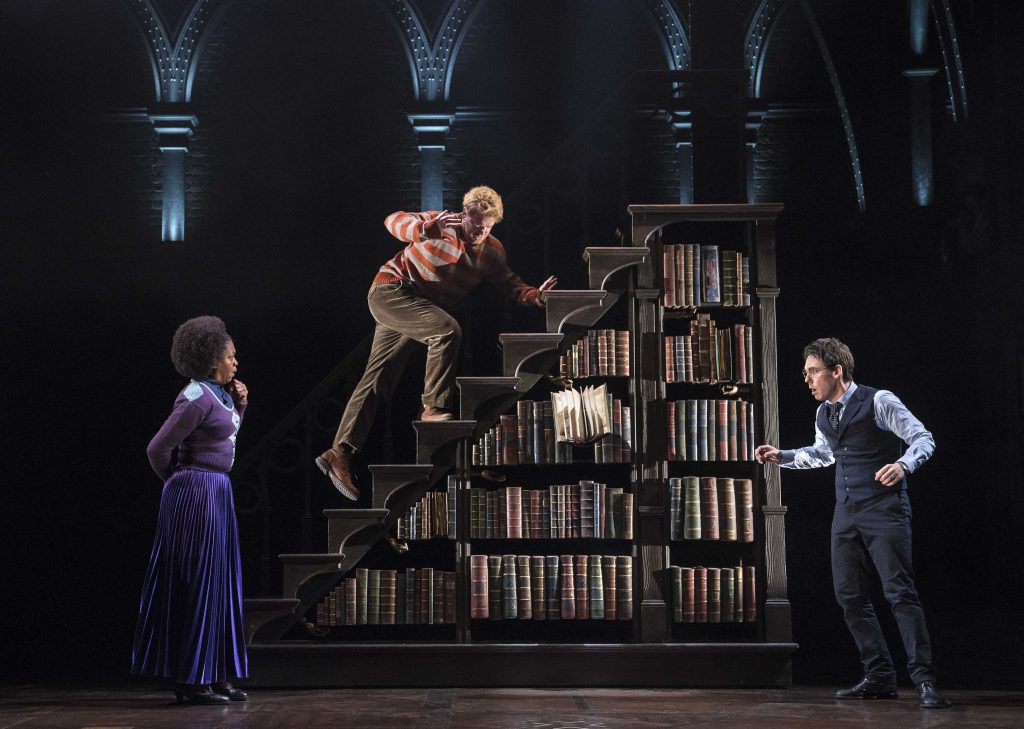 When “Cursed Child, Part One” offers a spectacular, interactive final scene, we literally scream, left panting and clutching our chests. Who is this “Cursed Child”?  Maybe it’s whoever we need it to be. 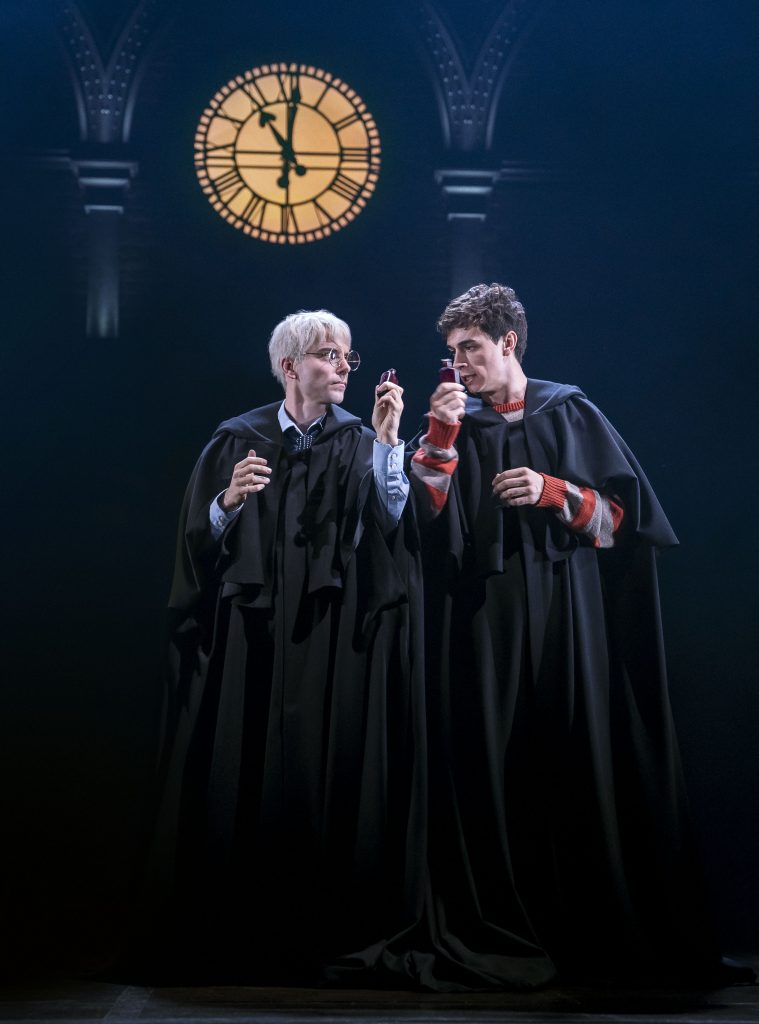 Harry’s best friend Hermione (dynamic Yanna McIntosh) is now the Minister of Magic, the leader of Britain’s magical community. It’s brilliant to have her played by a Black woman, giving her a leading role.   Because in America, Black women have been confined to supporting roles, I’m pleasantly surprised that John Tiffany gives a principal role to a woman of color. I also feel guilty that I was so shocked. Hermione reminds me that I am not defined by my skin color no matter how the world treats us.

Harry’s sense of isolation reflects the general trauma of all exploited communities. It’s time to nip that exploitation in the bud and have the difficult conversations that can heal. The spectacular “Cursed Child” kick-starts those inter-generational and inter-racial talks. 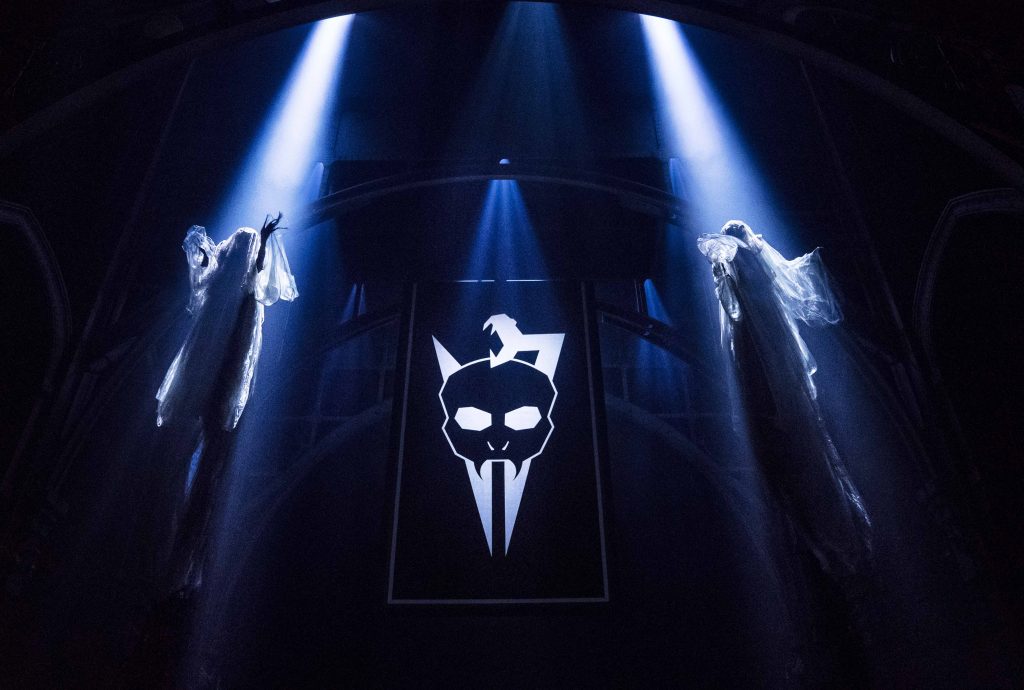 “Harry Potter and the Cursed Child” –a new play by Jack Thorne, based on the story by J.K. Rowling, Jack Thorne, and John Tiffany, directed by John Tiffany, at The Curran, San Francisco, through Saturday, June, 20, 2020. Info: harrypottertheplay.com