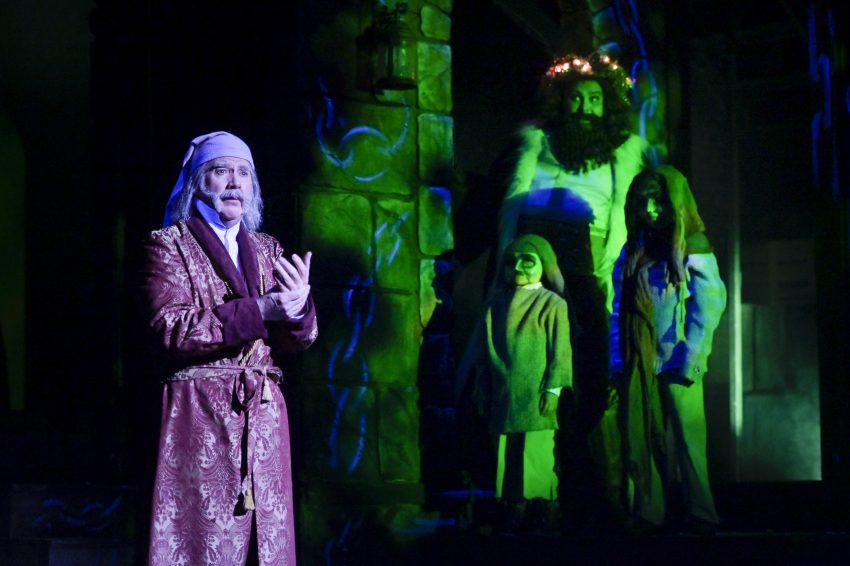 A hilarious cast of spooky ghosts and cheerful carolers foreshadow the memorable message from Tiny Tim (adorable Austin Milgrim) : “God bless us, every one!”

The show springs to life with spectacle. Along with a big ensemble dance number, this Dickens extravaganza jolts us with unexpected confetti explosions.

Cranky Ebenezer Scrooge (dynamic Michael Ray Wisely), a confirmed miser, has abandoned the Christmas spirit. But the Christmas Ghosts teach him that the Holidays are an opportunity for generosity.

The spectacular special effects lean more to A Nightmare Before Christmas than standard holiday cheer. I genuinely freak out when Jacob Marley’s Ghost (eerie Jeff Draper) bursts from the floorboards of Scrooge’s bedroom. The lighting turns an ominous green and screams resound. 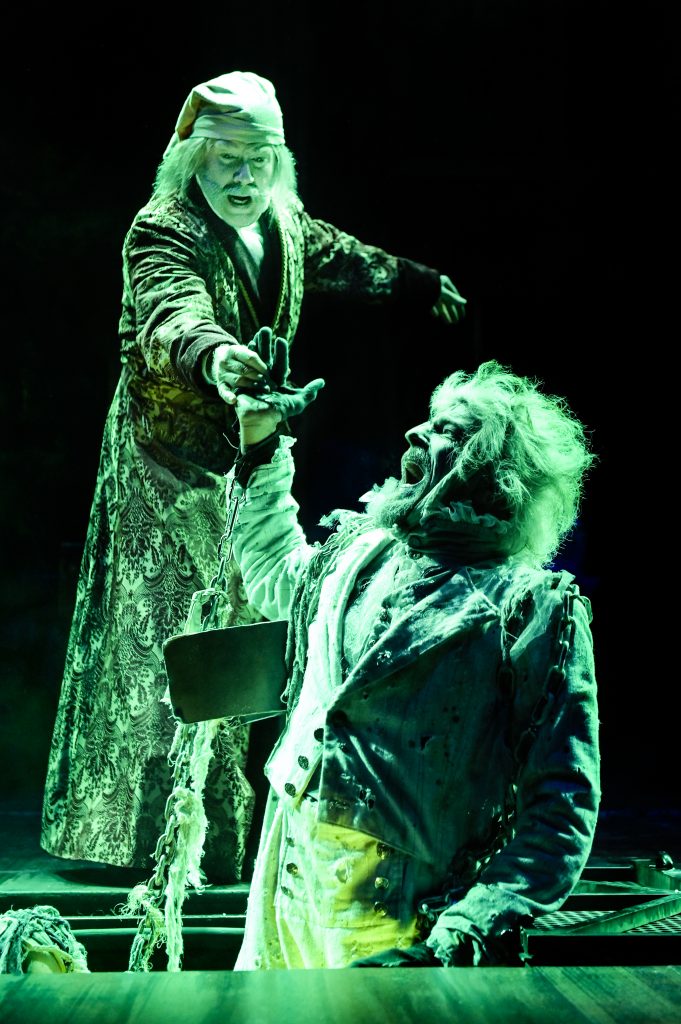 Chained to two other men, Marley’s Ghost limps about the stage, a vision worthy a PG-13 rating. Thankfully, the Christmas Spirits brighten up the mood, reminding us that children are welcome.

The Ghost of Christmas Future appears as an impressive 10 feet tall puppet, manned from the inside. This incredible structure, cloaked in black fabric, floats around the stage to ominous music—the most gripping effect. This “Christmas Carol” dawdles leisurely through the tale of Scrooge and the Ghosts, leaving us to make the connections.

The Ghost of Christmas Past (effervescent Kerri Shawn) shines in a glittering white gown adorned with twinkling lights. Her tantalizing Spirit brings Scrooge back to his childhood, summoning emotional moments. 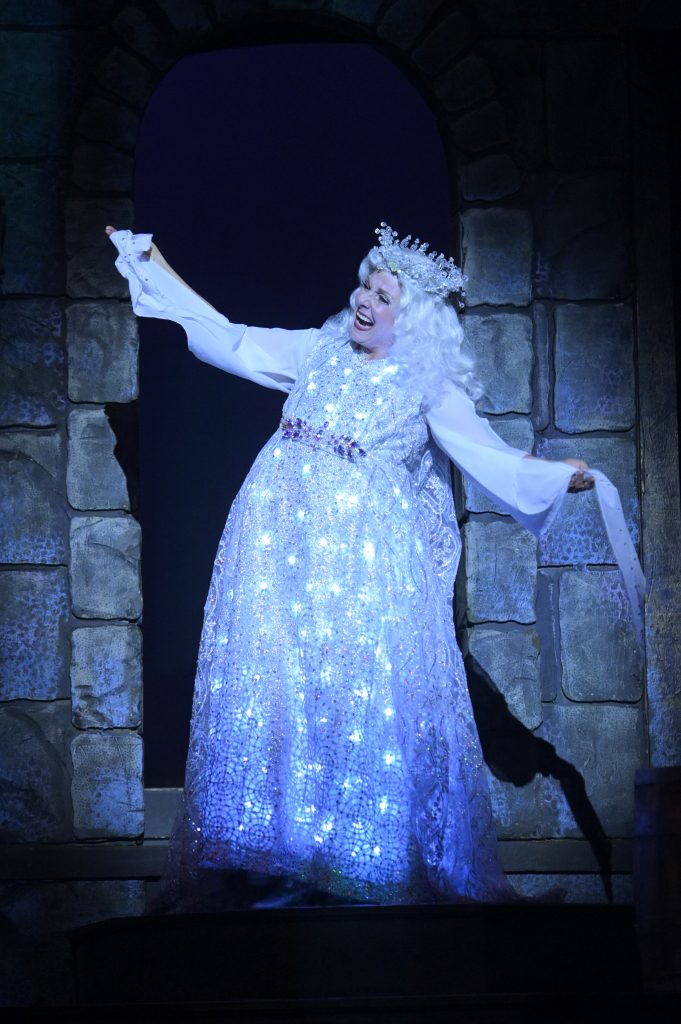 In a sweet portrayal of young Scrooge, Xander Raymond humanizes the miser.  When his sister Fan (elegant Katie Glazier) angelically sings, the boy kneels, and we respond with  a collective “aww.”

I couldn’t keep myself from chuckling when the hilarious Ghost of Christmas Present (scene stealer Jerry Lee) literally bursts out of Scrooge’s bed.  The Ghost taunts Scrooge with his green cape, a nice comedic touch. 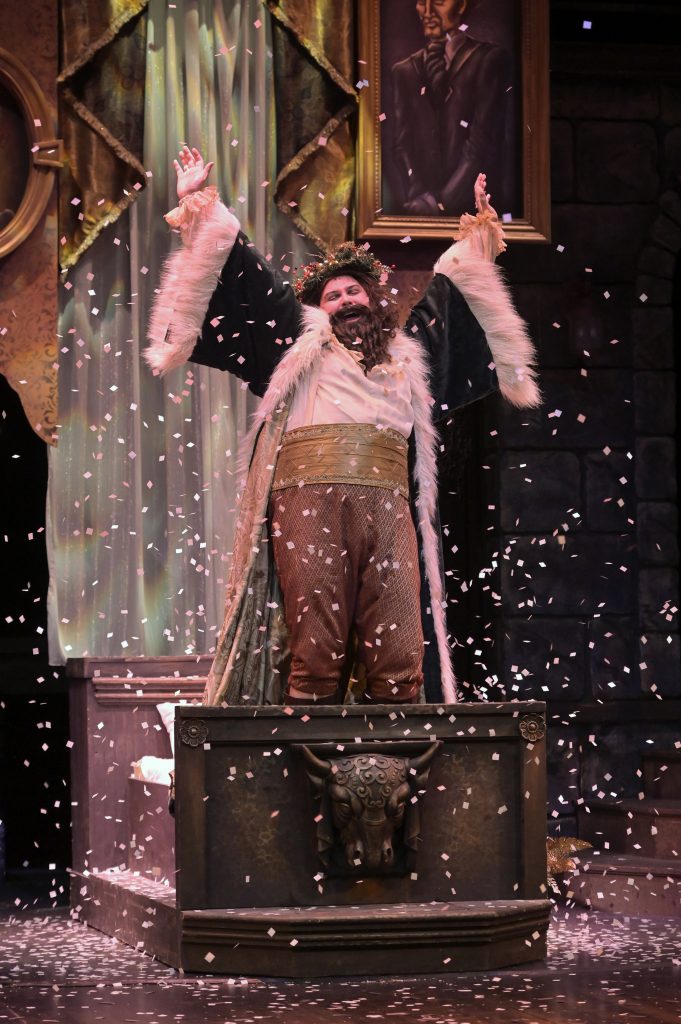 Center Rep’s retelling of Dickens’ story, coupled with shock and special effects, slows down as we get to the well-known ending.  It’s an annual tradition that could use some freshening.

Center REP offers a “A Christmas Carol” that delights with comedy and tender moments, with enough bursts and explosions to keep parents and children alert. Sprinkled with screams, Director Denison’s spectacular still spreads generosity and Christmas Spirit to all of us.